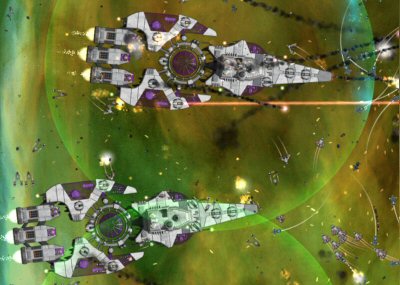 Positech has announced the release of the latest expansion for Gratuitous Space Battles – The Parasites. From the Official Website…

What The Parasites Expansion Pack Contains:

10 New ships. 4 Cruisers 3 Frigates and 3 fighters, all in a new graphical style by the same artist who did the original GSB artwork. The parasite ships have multiple translucent sections in varying colors, coming accross as classy, expensive, but also not to be messed with..

3 New ship equipment:  The flak cannon is a cruiser weapon designed to target enemy fighter swarms. The cannon ahs an ‘area-of-effect’ damage as well as hitting the target ship. The Plasma slinger is a small but ultra-high-rate-of-fire plasma torpedo weapon. This is the first plasma weapon that can have multiple torpedoes in flight at the same time. The missile revenge scrambler is a whole new type of ECM weapon that actually sends missile back to attack the ship that launched them, rather thamn just scrambling their guidance systems.

You can find out more about this new race, as well as how to purchase the DLC pack, over at the game’s official website.