Drainpip and GamingShogun were treated with a sneak peak of Diablo III. As we sat down, the simple class selectrion screen showed us our fate. Of course we selected the Witch Doctor and Wizard which are the new classes released so far. The town we started in was ruined and overrun with undead. As a Witch Doctor, Drainpip wasn’t greeted with a friendly smile. 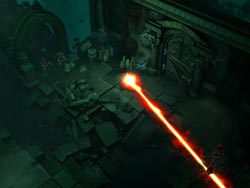 I suppose I would too if someone came up to me with a bone through their nose.

I can say this: Diablo is back. The single dungeon demo we experienced put us right back into our memory as if we had never left the world we spent so much time in almost 10 years ago. We both joined up the game and were instantly in playing side by side in a beautiful, destructable, dark world. I suppose this is the dark, evil place all those people with too much time on their hands wanted because we thought it was quite drab and dank… which it was – so kudos to the art department… (cont.)

Our first encounters were a little sloppy, but once we got the hang of it, it was just like getting on a bike. Soon, we were killing machines with spells of graphical goodness destroying zombies and skeletons alike. The dungeon we were running was the final resting place of a skeletal king who tried foiling our every move as we moved toward his throne. 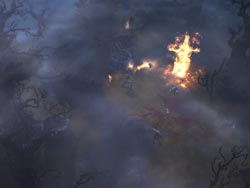 Although the destructable environment was a little bit too easily destroyed, it sure was fun taking that place down to kibble.

As we traversed the place, we leveled up several times. There seems to be a plethora of skills to choose from and upgrade – we both felt the skill bar at the bottom was a welcome feature. The rest of the UI was a little bit ‘muddled’ and hopefully the already polished game gets a bit more shine in that department before release.

The Witch Doctor was a blast to play. To start he can summon two zombie dogs which are brutes and can definitely take a beating. You can ‘buff’ them with fire or disease so their enemies take more damage. The Witch Doctor himself likes to let the dogs work and stand back lobbing a catalogue of area of effect, damage over time spells on the unsuspecting undead. Anything from a tower of spiders, to a flaming skull destroy your enemy quickly and efficiently. 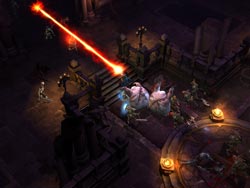 The Wizard was a great long range direct damage dealer. While the dogs were doing their thing and the spiders and disease slowly crumbled the undead, the Wizard’s spells simply decimated the remaining remains. I can imagine the Witch Doctor could play through the game without an issue by himself (although, what fun is that?). The Wizard would be a cautious solo artist, taking care to watch mana at all times because when it runs out, you’ll die quicker than a ninety year old smoker.

Loot was fantastic and the graphics from the environment to the spells were crisp and vibrant. The Wizard’s spells especially popped out, lighting up the screen. Diablo is back my friends, Diablo is most definitely back.