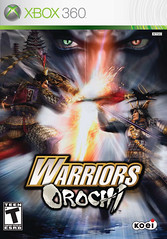 KOEI has announced that their Warriors Orochi has shipped more than 1.5 million units since its release and that they will be bringing the game’s sequel, Warriors Orochi 2, to North America this September for the Xbox 360 and PS2 platforms.

Official Release:
KOEI, recognized worldwide as the premier brand of strategy and action games, announced today that the company has shipped a combined one and a half million units worldwide of WARRIORS OROCHI&#8482; across all video game platforms. The hit game is a crossover of two of the company&#8217;s biggest franchises, DYNASTY WARRIORS&#174; and SAMURAI WARRIORS&#174;.

&#8220;This milestone is a significant testament to the global impact not only of this game, but also to the tremendous admiration that fans worldwide share for the DYNASTY WARRIORS and SAMURAI WARRIORS characters,&#8221; said Amos Ip, Senior Vice President at KOEI Corporation. &#8220;As we celebrate, I would like to recognize and express our thanks to the video game world&#8217;s greatest fans for making this achievement possible.&#8221;

KOEI also announced that it is bringing WARRIORS OROCHI 2 to North America. The game will be available for the Xbox 360&#174; and PlayStation&#174;2 in September 2008. WARRIORS OROCHI 2 is not yet concept approved by Microsoft.