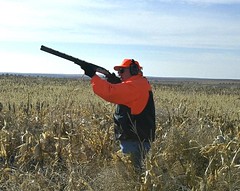 Due out in the Fall of 2008, Cabela’s Legendary Adventures for the PS2, PSP, and Wii platforms promises to let gamers hunt animals such as the Alaskan brown bear, Roosevelt Elk, and Yukon moose in over ten North American hunting locals.

Players will hunt in different eras in search of trophies such as white-tailed deer, Yukon moose, Alaskan brown bear and Roosevelt elk in over ten of North America’s top hunting locations, including Kodiak Island, the Yukon and the Rocky Mountains. Each location in Cabela’s Legendary Adventures is a visually stunning open outdoor environment that encourages exploration and tactical variation. Shooting mechanics have been developed to reflect modern as well as historical hunting technology, so players relive the hunts complete with detail from specific time periods.

Under Cabela’s guidance, the firearms, tactics and gear in Cabela’s Legendary Adventures are as true to real life as a game will allow. The title will also include a large variety of additional hunts featuring over 30 species of other big game, small game, waterfowl, upland birds and turkey.