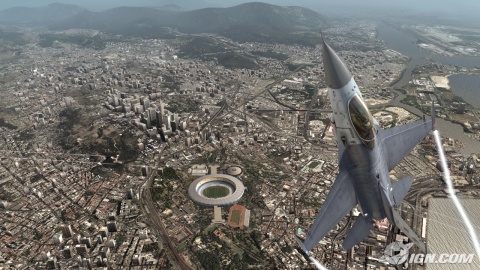 The next Tom Clancy game was announced today, titled Tom Clancy’s H.A.W.X. The game is an arcade flight sim set for the PC, Xbox 360, and PS3 platforms this Fall. Initial details released from the IGN exclusive include the following blurb:

HAWX features an Enhanced Reality System (ERS), which is meant to make even the average pilot feel like Iceman. ERS includes radars, incoming missile detection, an anti-crash system, damage control system, tactical map, information relay, weapons trajectory control and allows players to give commands to their AI squadron. With the Assistance Mode flipped on, the ERS will put pilots into a maximum safety mode. Think of it like having all the assists turned on in a racing game. You get more freedom and control with Assistance Mode off, but you will also be at greater risk without the full protection of the ERS.

Personally, it sounds a bit too Ace Combat and not enough Lock-On for my tastes, HOWEVER, I will reserve total judgment until giving it a try.

*Image in story originally from IGN.