Rugby is a game that has not received nearly as much video game representation has other sports such as football and baseball – and that’s a shame. Rugby began in 19th century England and, as of 2014, there were still 6 million players around the globe! NACON and Eko Software released their first rugby title, Rugby 18, in 2018. Unfortunately, that title did not score well with critics overall but then they released Rugby 20 and scores improved somewhat. Now, in 2022, they have launched the latest version of the game: Rugby 22. Can this upward momentum of review scores continue? Will this be the best iteration of video game rugby yet? Read on, dear reader, to find out!

Rugby has a lot of rules and terms and, if you’re not versed in the sport or familiar with them, you would be best to do some research before playing Rugby 22. I would suggest going on YouTube, taking a half hour and watching some “Rugby for Dummies” videos to familiarize yourself with the game. If you’re someone who is not familiar with rugby, Rugby 22 is not the easiest thing to play in terms of understanding what’s actually going on. Rugby 22’s tutorial doesn’t do a good job of explaining all the rules, game controls, or gameplay mechanics and I think that would be a big boon to Rugby 22 playability and fun – especially for new players – if it did! 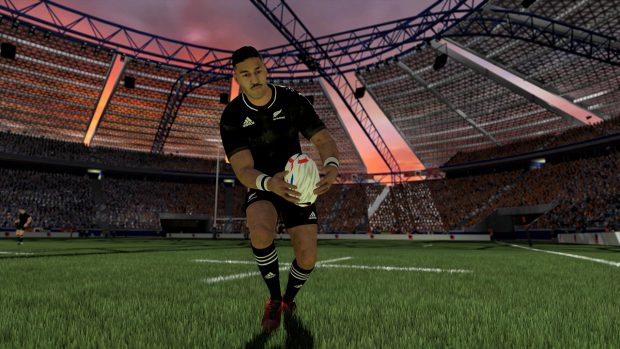 Rugby 22 offers four game modes: Quick Match, Online Match, Career, and League. Quick Match allows you to play, as the name suggests, a quick match between teams. Online Match allows players to play games online against other human beings. The Career game mode allows you to build a custom team and play them against AI or another human player (we’ll get more into custom teams later). Finally, we have the League mode, which allows you to chose a pre-existing team and play them through a full season.

The game’s career mode is lacking in so many ways that it should not even be called such a thing. It is much more aptly called a “Custom Team Mode” or something to that effect. There are no real career mode style options to be found anywhere in the mode. Training, organizational, and logistical decisions are nowhere to be found. Putting together your custom team is also tedious, as you collect player cards through the course of gameplay in the other modes. You can’t actually create a player from scratch, so you’re a slave to unlocking player cards to add those players to your custom team.

Actually controlling your players during a match is difficult (primarily because many of the controls are not explained well or at all) but, even after you get to know your way around the gamepad, pulling off moves and the various tactical options available to your players is tough, but not impossible. A lot of the game’s focus in on “Running Rugby”, a play style where teams will keep the ball passing from player to player in order to move as fast and nimbly as possible. When I actually pulled off something I intended to do, I felt accomplished in doing so – a rewarding experience. However, there is a lot of tedium to be found, especially early-on.

Team AI leaves a lot to be desired (especially at lower difficulty levels) and I was shocked several times just how defenseless my team’s defensive line would leave areas of the pitch undefended. There is a commentary throughout matches but I found it to be awkward and, at times, mistimed with what was going on in the game. 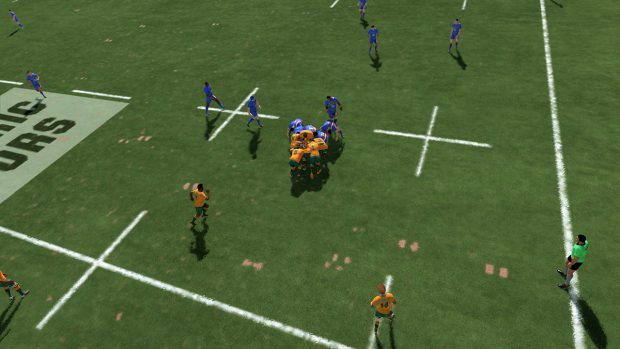 Unfortunately, in the visuals category, Rugby 22 really suffers. The game’s graphics shader by itself is not great and there are a lot of letdowns here that could have been avoided. A large lack of variety of character models exists, and their animations are not nearly as smooth as I like to see in a sports title – especially one where the emphasis is on movement and contact between players. Also, it seems like players are moving way faster than humans actually move around the pitch. It could just be a bug, but it was distracting. Also, game textures tend to be somewhat flat and bland. Thankfully, Rugby 22’s audio is decent, with plenty of sounds from around the pitch.

Overall, Rugby 22 is the best of the NACON/Eko Software Rugby series. That being said, they still have a ways to go before I would recommend it to someone who is unfamiliar with the sport or, in general, is a casual sports gamer. If you are a knowledgeable rugby fan with a good deal of patience to learn the game’s controls (through trial and error), you will find Rugby 22 enjoyable, eventually. The game is out now on consoles and PC. NACON/Eko Software provided GamingShogun.com a PC code for use in this review. 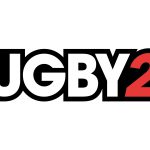