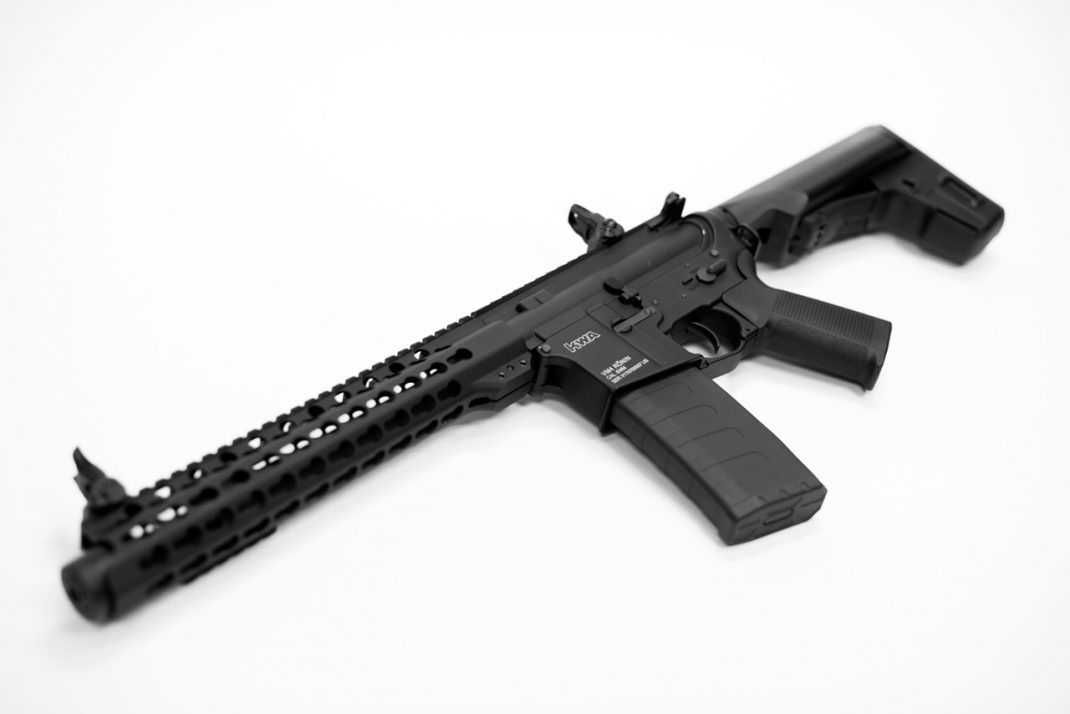 Some weeks ago, KWA unveiled a new line of airsoft guns called the Ronin series. This series is made up of both their generation 2.5 and generation 3 AEGs, albeit with a cool-looking M-LOK rail system and some updated features. I picked up the Ronin 10 inch SBR from Evike for $339 so that I could take a closer look at it and see how it stacks up compared to the rest of the KWA family as well as some of the newer AEGs on the market.

KWA’s generation 2.5 airsoft guns feature a rotary hop up which won’t lose its adjustment easily during heated gameplay, a radiused and reinforced gearbox for stability and strength, variable performance system, magazine cut-off system, and a switch life extender unit that prevents trigger contact burnout. The additions to the Ronin line up when compared to KWA’s basic gen 2.5 rifle, the VM4A1, are cosmetic: You’ll find a solid M-LOK rail system, PTS grip, PTS flip up sights, and a PTS Enhanced Polymer Stock. Additionally, this rifle came with one of the new K120c 30/120 magazines equipped with the special follower that interacts with the rifles’s cut-off system. Additionally, the Ronin 10 features an ambidextrous fire select lever for you left-handed shooters out there.

If you have yet to see KWA’s variable performance system in action, it is pretty intriguing. Basically, the airsoft rifle was engineered with a way to mechanically adjust the pressure on the spring. This is accomplished via a screw where the buffer tube attaches to the receiver. KWA is smart and include the long hex driver to accomplish these adjustments right in the box. Each twist of the screw adjusts your velocity by +/- 2.5 FPS. The Ronin 10 is rated at adjustments from 380 all the way to 430 FPS, so it is very flexible if you need to go from, say, many local fields’ rule of a 400 FPS limit to various milsim events’ 450 FPS limit. Sure, you can’t get to the 450 limit, but 430 is a whole lot better than 400, allowing you to shoot heavier BBs and increasing your joule rating. What I like best about the variable performance system is that it is mechanically-driven. It doesn’t need a computer chip to calculate velocity and draw that much more power from your battery.

Speaking of batteries, you can easily run a decent-sized 11.1v LiPo battery in the Ronin 10 thanks to its PTS stock with crazy amounts of storage space and the rifle’s switch life extender feature. Putting that extra voltage through the rifle will not burnout your trigger contacts like it can do on airsoft rifles without electronic switches or MOSFET units. 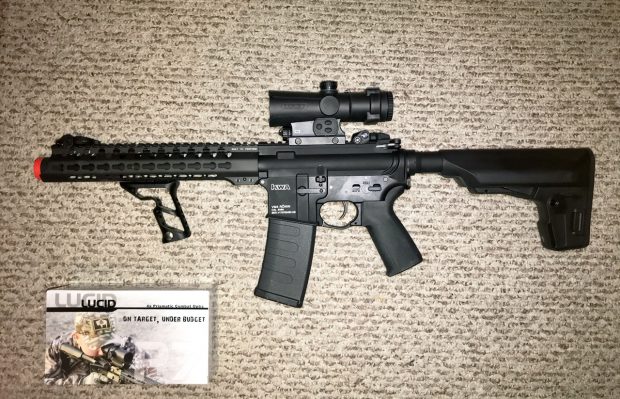 In play, the KWA Ronin 10 SBR handles beautifully thanks to its shorter length and lighter weight. The outer barrel flash hider sticks out of the 10 inch rail system a tiny bit, making the gun easy to maneuver around corners. It should be noted that if you need a Ronin specifically-built for CQB or indoor purposes, KWA has you covered. You can always pick up the Ronin 6 PDW airsoft gun, or, simply swap out the upper receiver and barrel from your Ronin 10 with the shorter length one! This modularity is one of the hallmarks of the Ronin line, and I can’t wait to pick up extra upper receivers of various lengths whenever they end up selling them. KWA’s tried and true rotary hop up is very accurate and the sheer amount of performance one gets right out of the box with this AEG is remarkable.

If instead of use in CQB games, you would like to have a DMR platform, KWA is releasing a Ronin 3 RECON RM4 airsoft rifle a bit later this year. That rifle will feature a longer handguard and barrel assembly while also featuring KWA’s generation 3 ERG (Electric Recoil Gun) system. Additionally, the new Ronin rifles of the generation 3 variety will ALSO feature the variable performance system.

Overall, the KWA Ronin 10 inch SBR airsoft gun is an excellent airsoft purchase for field play. With its variable performance system, you can adjust it from local field limits to milsim limits with ease and its excellent build quality coupled with light weight make it a breeze to carry around and operate. The KWA Ronin series is available now for $339 dollars from most airsoft retailers!