Back in October, Creative Labs announced two new speaker systems designed for audio power – the Inspire T6300 and T3300 speaker systems. We recently got the chance to check out the more complex, 5.1 surround sound system, the Inspire T6300. Visually, the T6300 speaker system features a mostly-black, classy look with eye catching, silver rings around the satellite speaker drivers. The front satellites are also larger than the rear and center ones in order to increase visual appeal. Additionally, there system comes with a small dongle that controls the on/off as well as overall volume. The Inspire T6300’s sub-woofer is pretty standard and fits in with Creative Labs other sub-woofer designs on the market. The speakers and sub-woofer are actually very portable in size, and would easily fit into a cluttered dorm room or home office.

Installing and setting up the Creative Labs T6300 speaker system is very easy. Simple arrange your speakers in the desired locations and then plug the cables in from the Inspire T6300’s sub-woofer to your sound card. With the T6300, Creative Labs has actually attached the audio cables to the sub-woofer. This means that you will never lose them if you have to move the system somewhere else, which is nice. Fortuitously, we still had the Sound Blaster Z sound card in our gaming rig when setting these up, so we thought it would be nice to see how the speakers handled Creative Labs own sound card.

The Creative Labs T6300 speaker system features two new technologies that the company has developed: The “DSE” (Dual Slot Enclosure) and the “IFP” (Image Focusing Plate). These technologies are designed to maximize the T6300’s room-filling power. The Dual Slot Enclosure feature basically means that the speakers have a fully-functional port tube in them, which is said to increase volume and allow the speakers to better reproduce mid-bass levels. The Image Focusing Plate technology is designed to increase the sound field of the T6300’s satellite speakers in comparison to other speakers without the IFP. 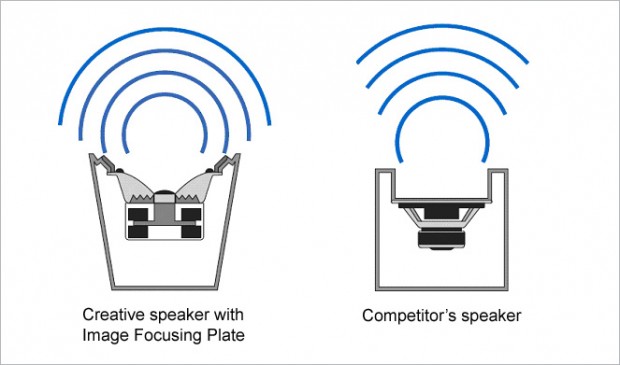 The big question is, do these technologies make a difference to the listener? In theory, they absolutely make a difference in terms of sound volume and quality. You can easily test the DSE feature by covering up the ports on the satellite speakers. Doing so significantly decreases sound volume and quality. The IFP is somewhat harder to test without physically removing or altering it which we did not want to do with a review unit.

As far as the speaker system’s performance is concerned, the proof is in the proverbial audio pudding. In using the Inspire T6300 during numerous rounds of not only Call of Duty: Black Ops II and Far Cry 3 but, also, watching The Avengers with it, the speaker system handled everything I could throw at it and was more than capable of pumping out some serious bass and room-filling sound. I only wish that Creative Labs would have added an AUX-IN port and headphone port to the system. These features could have been added into the control dongle or perhaps one of the front speakers to add additional value to the user.

Overall, the Creative Labs Inspire T6300 5.1 speaker system is a very decent surround sound system for about a $110 dollars – especially for your favorite video games and action movies. It is a speaker system that “chews” up whatever sound it’s given and throws it out to you like a hardball. While not my ideal system for delicate sounds (musicphiles and audiophiles might want to look elsewhere), the system does a fair job of that as well – especially when paired up with Creative Labs SBX Pro Studio audio processing technologies. Just make sure you check your bass levels or your neighbors might complain as their windows rattle – sorry, neighbors.

The Creative Inspire T6300 5.1 speaker system will be available on creative.com starting around December 20th, and selling for $79.99.