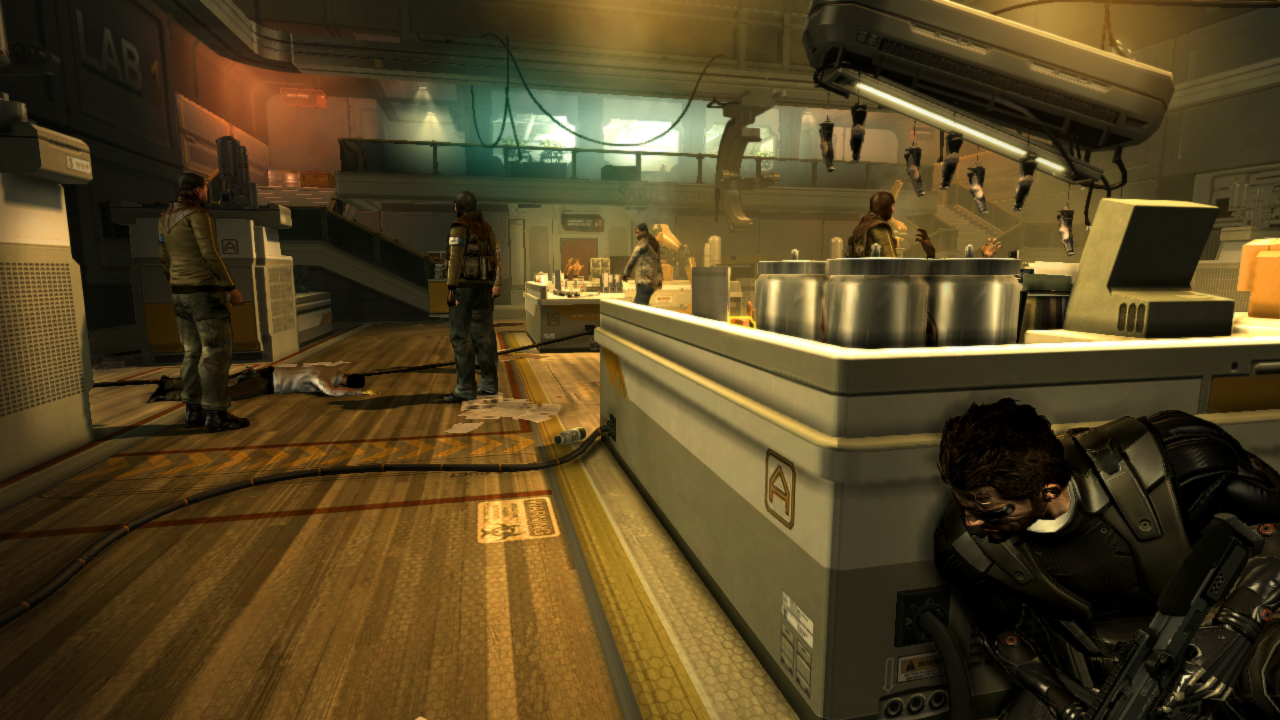 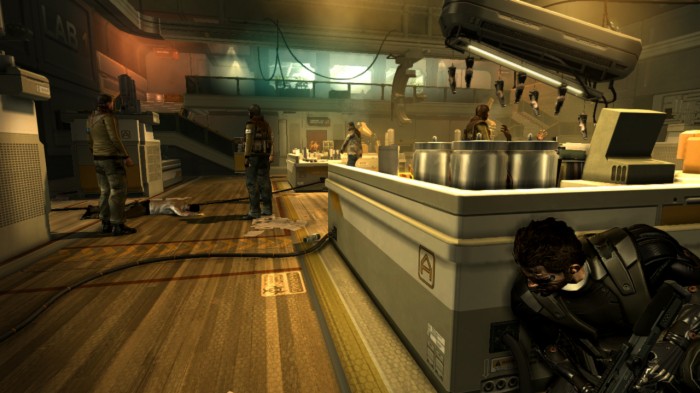 The original Deus Ex was an action-RPG created by Eidos Interactive and the now-defunct Ion Storm. The game, released back in 2000, was met with critical acclaim and has since become one of PC gaming’s classic RPG titles – seen by many as the first modern incarnation of previous classic titles like System Shock 2. The game was set in the year 2052 and plunged the player into a world fraught with conspiracy, human augmentations, and player choice. Its sequel, Deus Ex: Invisible War, was not quite as critically-praised due to the bar effectively being set by the original (leading to a much more competitive array of games at the time) but also a streamlining of the controls and gameplay mechanics (which many felt was a “dumbing down”). One thing the sequel did in spades compared to the original was offer the player choices. With Deus Ex: Human Revolution, the third game in the series, now out and in-stores we were eager to see how it would compare to the previous two titles.

In the world of Human Revolution, the topic of human augmentation is a taboo to say the least.

Deus Ex: Human Revolution is actually a prequel to the original Deus Ex. Set in the year 2027, 25 years prior to the original game, the story puts players into the boots of Adam Jensen – an ex-cop who is now working as the head of Sarif Industries, a corporation on the verge of some big breakthrough in the areas of human augmentation. In Deus Ex, human augmentation is simply a part of life. While biases still exist, the world is much more accepting of augmentations as another tool developed by humans for use like a screwdriver or hammer. In the world of Human Revolution, the topic of human augmentation is a taboo to say the least. Without giving too much of the wonderful plot away, I will leave it at that as far as the reasons are concerned. While Jensen does not start out as an augmented human being, after a devastating terrorist attack leaves him mortally wounded, augmentations are forced upon him to bring him back for the purposes of finding out the reasons and people responsible for the attack. In typical Deus Ex style, however, nothing is really as it appears and the plot nicely flows through its twists and turns – sometimes predictably (sometimes not), but always in an entertaining fashion.

It is the perfect blend of classic and modern gameplay mechanics that is sure to please old-school PC gamers and newer console gamers alike.

The game features a nice, semi open-world game system where players move from general locations in each chapter (Detroit, for example). Within each locale are usually sub-sections – each with some manner of side quest available to the player. Most of the positive aspects of Deus Ex and Invisible War are back for Human Revolution. In fact, the case could be made that Eidos Montreal simply took the best parts of each game, mixed in a bit of Mass Effect 2 for good measure, and topped it all off with a nice helping of Blade Runner in the creation of the game. It is the perfect blend of classic and modern gameplay mechanics that is sure to please old-school PC gamers and newer console gamers alike. The game’s cover system can be set to touch and toggle, and works very well in either mode depending on your preference. Adam can lean around corners for precise shooting as well as blind-fire to send enemies to cover before moving out. Levels can usually be played as stealthily or noisily as the player wants – one of the nice choices allowing for game re-playability. There is an array of both lethal and non-lethal weapons available to the player – each of which is able be further customized via upgrade packs purchasable at vendors and found over the course of the experience. Of course, in true Deus Ex fashion, inventory management plays an integral role in the game and Jensen must be careful how much and what kind of items he takes along in his finite storage space. Even fully-upgraded, players can’t hold every weapon type in the game.

Augmentations available to Jensen are varied and useful, from leg upgrades allowing for quicker running and jumping to hacking upgrades as well as things like the ability to see enemies behind objects. Augmentations are purchased and upgraded via “Praxis Points”. These points are awarded after a set amount of experience has been acquired and from also purchasing them from LIMB augmentation labs found throughout the game. The type and amount of augmentation you choose to put Adam through is exactly that, choice, and may or may not have implications later on the in the game. One gameplay mechanic I particularly enjoyed using was Adam’s melee takedown ability. When used, a cool in-game cut-scene of Adam dispatching (either lethally or non-lethally) a foe with serious Jiu-Jitsu plays. You can also upgrade that to work on two enemies at a time. There is something very pleasing to these melee sequences and I wish that was more fully-explored. In fact, direct combat augmentations are lacking in comparison to the amount of augmentations dedicated to stealth or hacking. I would have liked to have seen some more dedicated combat abilities implemented.

…one of the detectives to have an office inside the Detroit Police Station is “R. Deckard”.

The world of Deus Ex: Human Revolution is beautifully-crafted and has a cool Blade Runner inspiration behind it. In fact, as an easter egg, one of the detectives to have an office inside the Detroit Police Station is “R. Deckard”. Different locations in the game world all have a certain cohesiveness to them while also feeling different enough to denote being somewhere far from the previous. My favorite setting is the Chinese city which has been divided into upper and lower areas. It may sound a bit like a “So What?” kind of point in reading this review but, once you see this city in the game, I dare you to come back and still say that.

Elias Toufexis (Supernatural, Smallville) voices the role of Adam Jensen, bringing a Dirty Harry-style grit and gravel to the character.

Special mention must be made of the game’s voice actors, who do a spectacular job of bringing the game’s characters to life. Elias Toufexis (Supernatural, Smallville) voices the role of Adam Jensen, bringing a Dirty Harry-style grit and gravel to the character. In fact, because I felt like I was a futuristic Harry Callahan in the game, choosing my own brand of justice depending on the decision brought before me (more on this later), I stuck with the slower (but powerful) revolver as my primary weapon throughout the whole thing! Also notable is Steve Shellen who voices the role of Sarif Industries founder and CEO, David Sarif. Everyone does a great job, however, save for the “Adam Jensen-lite” which I will talk about later, in the next paragraph. Going further into the various character motivations is what Eidos Montreal calls the “Persuasion System”. Throughout the game, players will have the chance to question important characters. Based on their dialog choices and the character’s personality, they will either be forthcoming or not. The system is nicely-implemented and the dialog choices all make sense based on the situation the two characters are in. Going back to the actors, each does a great job putting the proper tone and inflection into their responses based on the dialog choices made by the player.

…I clocked critical game crashes at the rate of one every two hours or so, requiring me to kill the task and restart…

The unfortunate part of Deus Ex: Human Revolution, comes from its bugs and crashes… In my playing the game, I clocked critical game crashes at the rate of one every two hours or so, requiring me to kill the task and restart the computer. It did get me nice and efficient in the habit of saving my games regularly. Hopefully, Square Enix and Eidos Montreal can come up with some bug-fixes so the game is more continuous of an experience. Aside from the game’s bugs, there were some issues that detracted from my enjoyment of the game such as the strange change in the actor performing the main character’s voice at random times. The second actor sounds nothing like the main actor (and is not nearly as believable) and I was left looking intently at my screen trying to determine which character was speaking. Also, the game is clearly not optimized for SLI play just yet (similar at launch was the case of Crytek’s Crysis 2 – though they later remedied that with a patch). Our gaming rig has three-way SLI using Nvidia GTX-570s at a resolution of 5760×1080. Even on the most basic of settings, our rig crawled… Switching back to a single-monitor at 1920×1080, we were greeted with exceptional framerates even at highest detail settings. Again, hopefully, this can be patched so we can play through the game once again and take in more of the outstanding game world.

Despite the game’s bugs, Deus Ex: Human Revolution is an excellent action-RPG with tons of re-playability as well as featuring a wonderfully-crafted blend of modern and classic gameplay sure to please old and young alike. 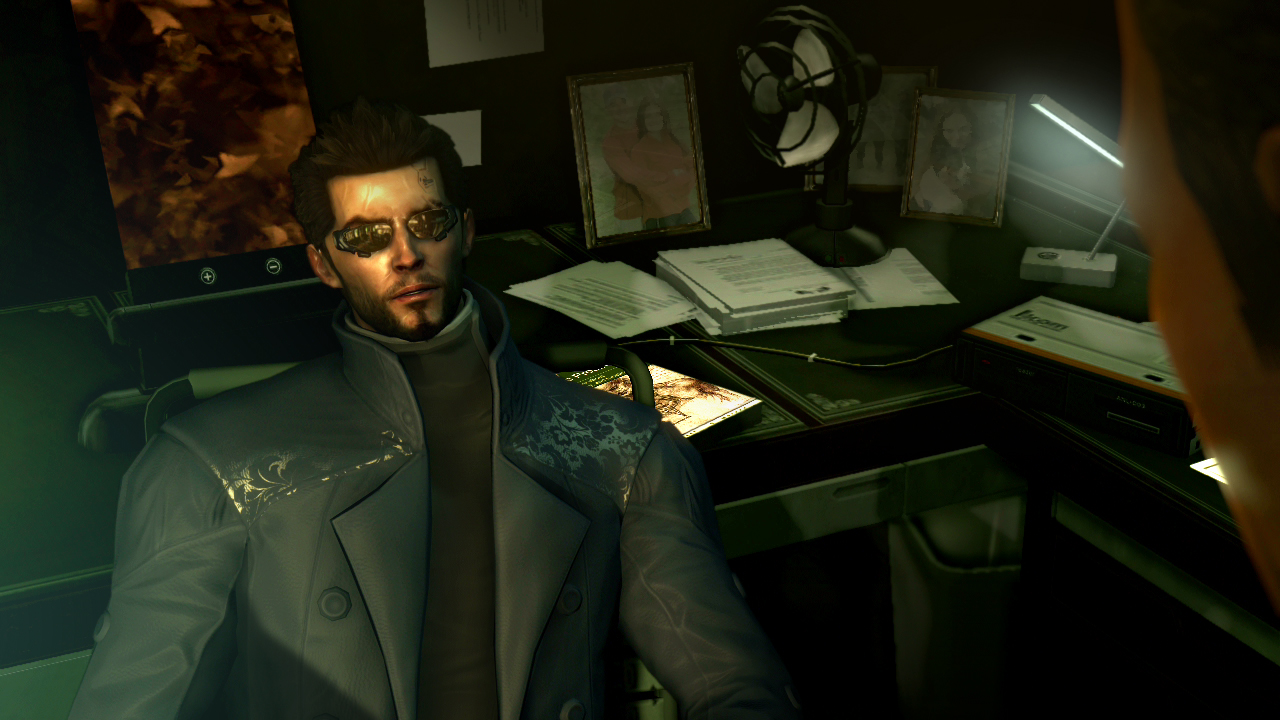 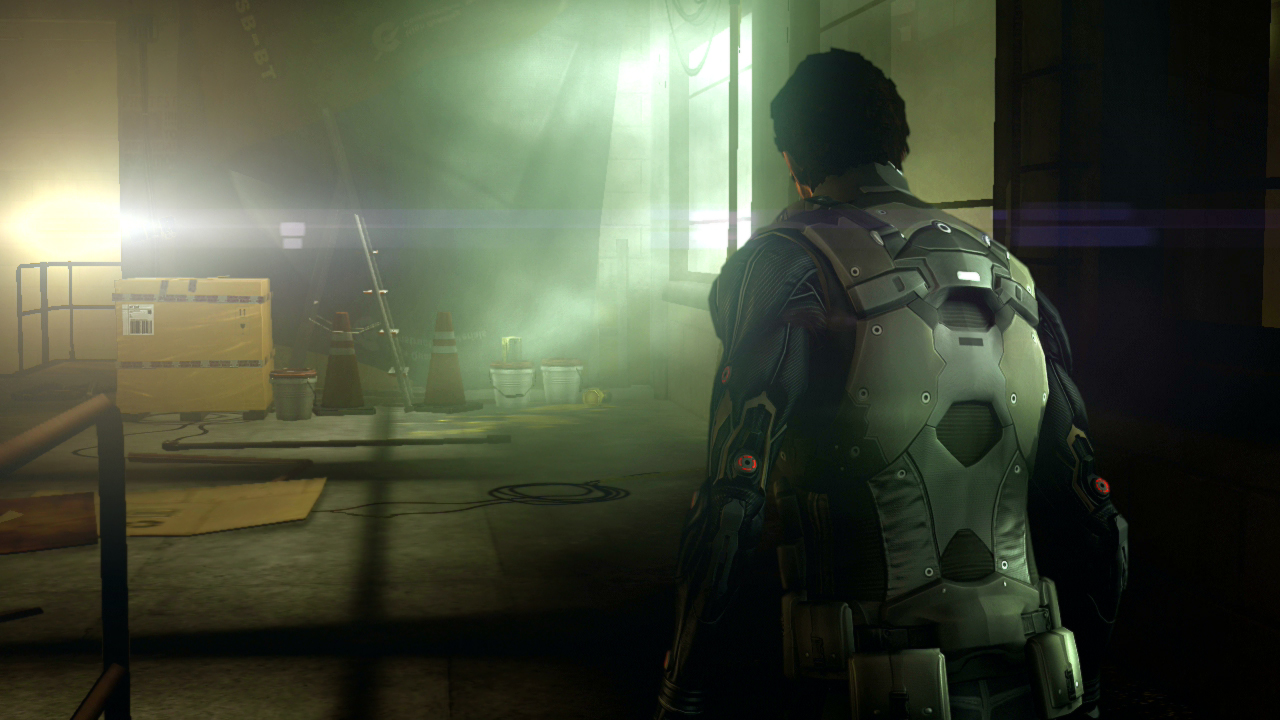 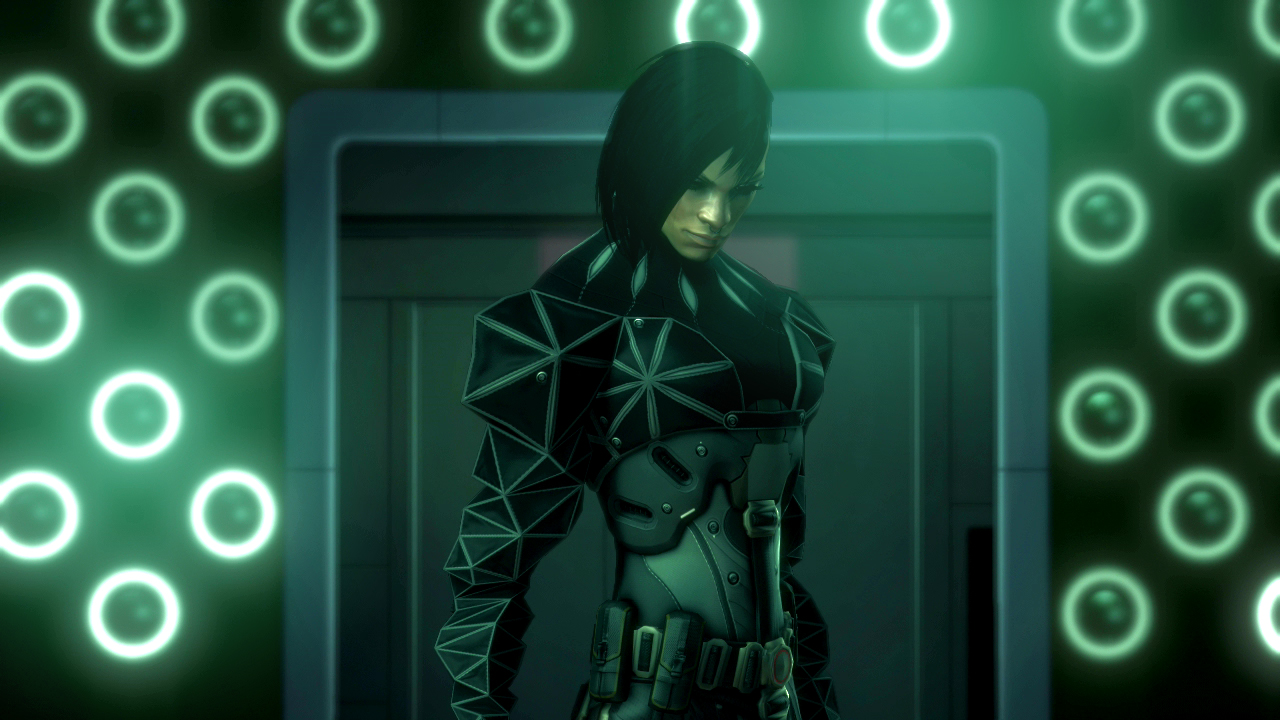 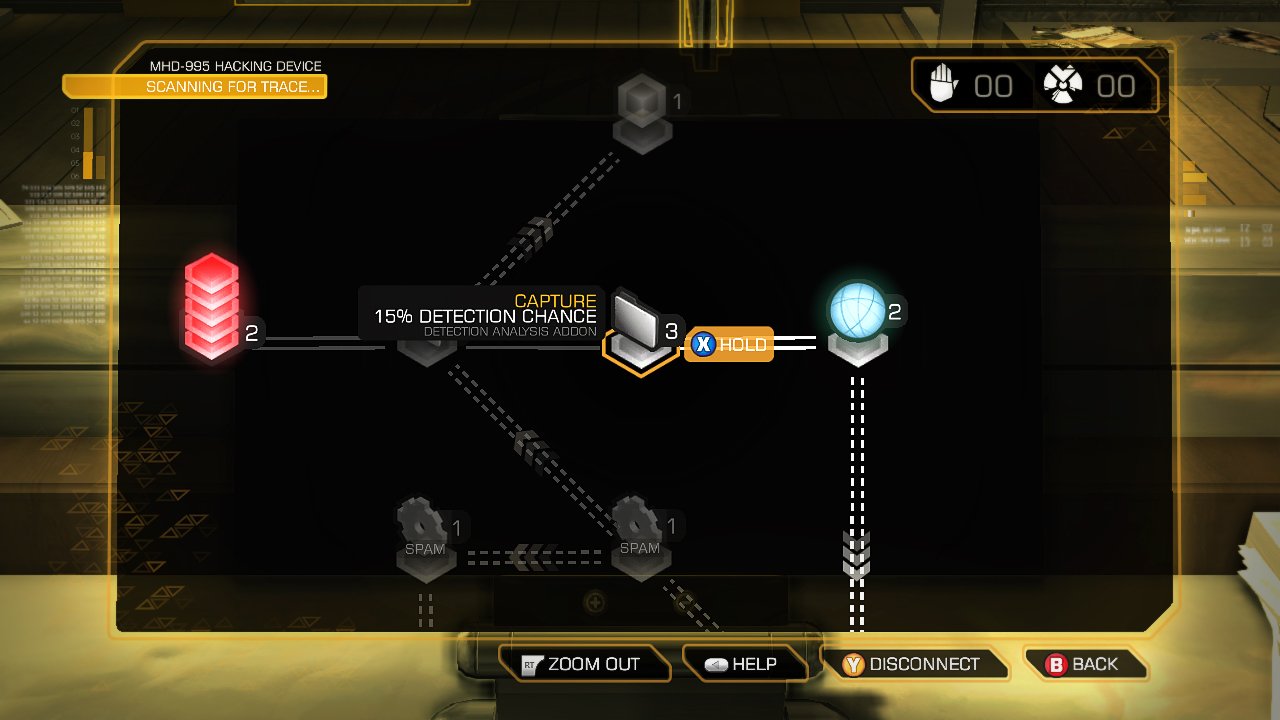 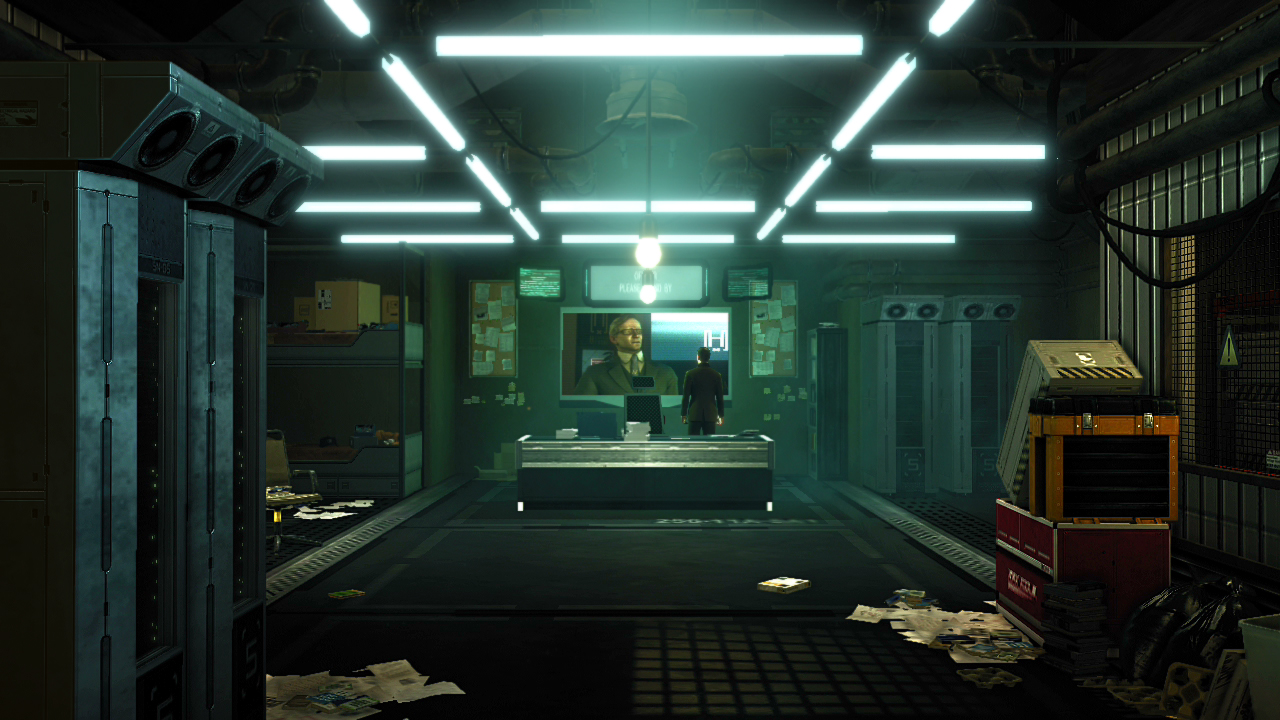 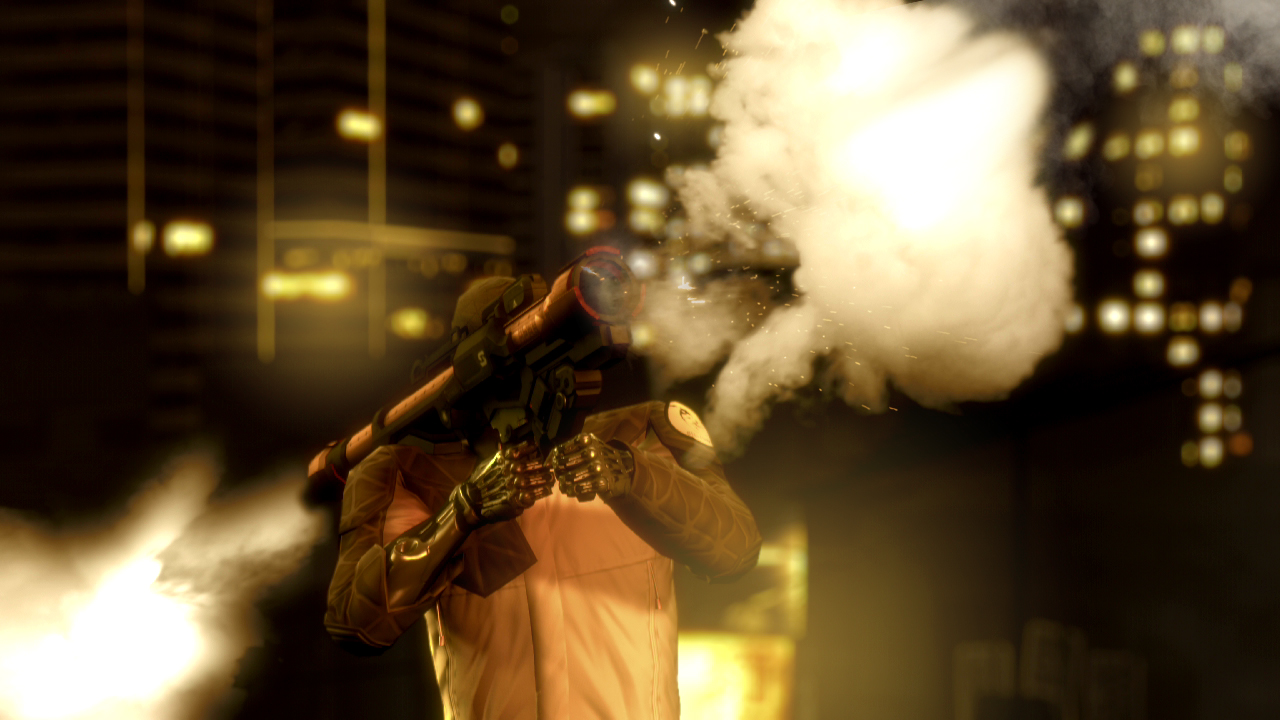