In the real world crime does not pay in the end and in the video game world it pretty much follows the same path. The dark underbelly of society fueled by power and money is always appealing to video game buffs like myself.

At E3 2009 we had a chance to go behind closed doors with the sequel to 2K’s popular title Mafia. Mafia II is being developed by a brand new studio in 2K Czech and is the first title for this studio. (cont)
Mafia II is set in the city of Empire Bay in the 1940’s. You are a fellow by the name of Vito who has immigrated to this city in hopes of finding a better life. His next obvious choice is to get involved with the local crime family to make a living. You start out as an entry level thug working your way up through the family and eventually the story takes you through 10 years of Vito’s life. 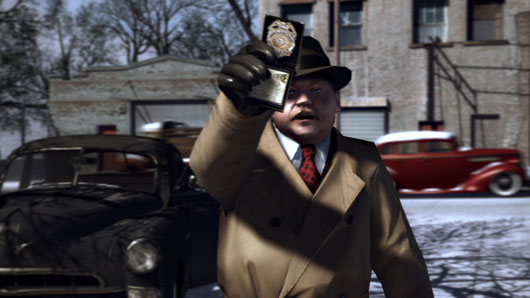 Empire Bay is inspired by real US cities and is a sandbox world that seems very alive. Local citizens go about their daily business and weather takes its toll on the environment. We were treated to the beginning of a missions where you had to drive to pick up your wingmen and the snowy weather was causing some problems. The developers were sliding all over the road as it continued to snow and had to ramp down the speed a little bit in order to avoid killing some innocents.

There are 20 different neighborhoods that you will find your way into with the story and everything has an authentic 1940’s feel. Billboards and shops are very reminiscent of 1940’s New York and you will even hear the music of the time playing out of cars. This really melted into the story well and gave you a feel of immersion to the world. Driving was a main issue for me in the original game as it was a simple drive from point A to point B with no real mechanics to it. From the looks of it the environment really comes into play this time around. 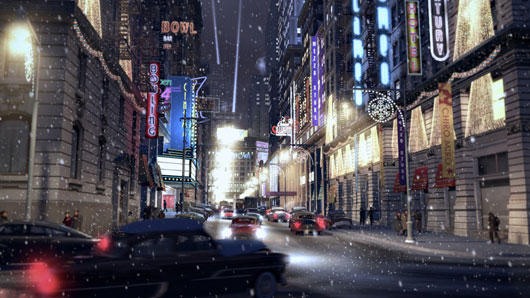 There is tons of action to Mafia II but my fear is that it is more of the same. That is not a bad thing as I really enjoyed the first game but I really did not see anything shiny and new for the series. Combat is done 3rd person in a sandbox world and everything is very story driven. We got to see a very well put together cinematic that leads you into a missions where you botch a hit on a rival target. Your team chases the men into a distillery and the fight is on. Graphics looked clean and I did not see any FPS problems or glitches in the demo.

Targeting was simple and the camera did not seem to be a pain as most 3rd person shooters are these days. There are going to be your normal weapons found in a gangland game including tommy guns, grenades, and molotov’s. I am hoping we see a little more variety or some surprises in the arsenal we use on the missions but in the demo it was standard weaponry. This is definitely a mature story line full of cursing, bullet wounds, and heartache. 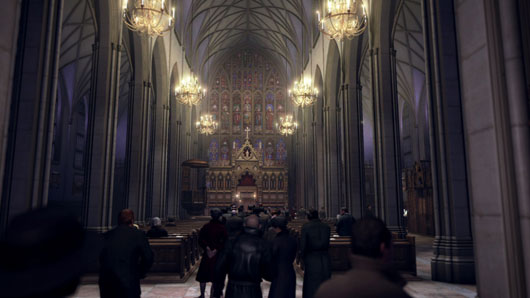 I don’t want to spoil some of the story elements so I won’t go into deeper detail about what we saw but the developers did tell us that there will be some twists and turns just like the original game. Mafia II really follows along the line of thinking of ‘If it ain’t broke don’t fix it’. I tend to agree as the original title was a very compelling and fun to play again. I am interested to see what little tweaks 2K Czech has for the game when it comes out. Mafia II is set to release this fall for the Xbox 360, Playstation 3, and the PC.