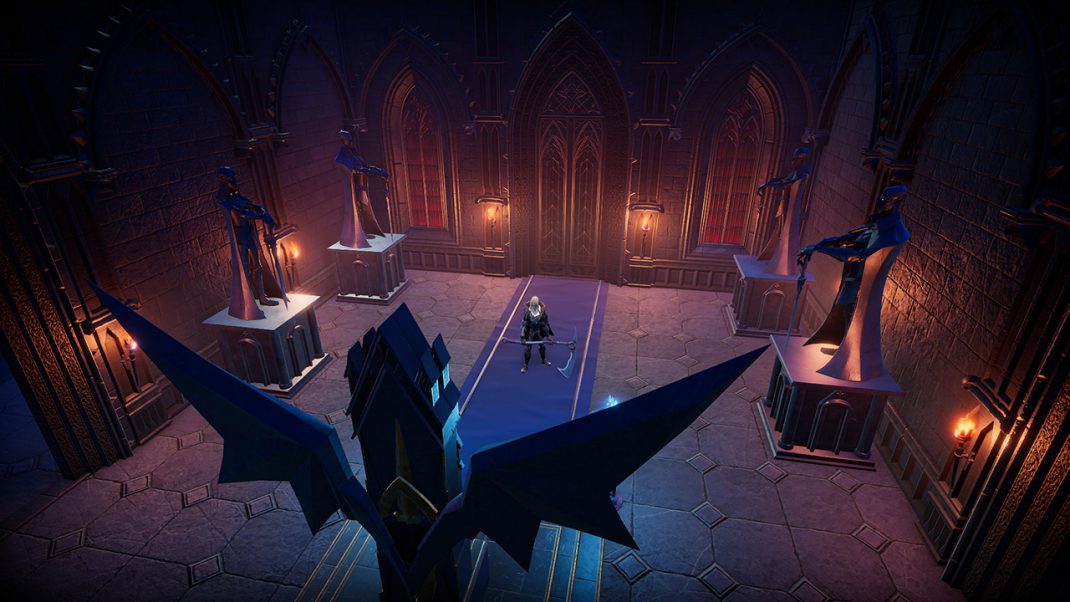 The ultimate gothic dream: Living in your own castle, feeding off the blood of the living, at one with the night life, and sleeping all day. Okay, maybe doing a little bit more than just sleeping all day, at least, that’s just one of the many things to do as a vampire in V Rising, an upcoming MMORPG from Stunlock Studios now on Steam.

V Rising starts you off with a highly customizable vampire and a selection of PVE and PVP. Only the basic modes were available during my preview but I ventured through both, easily selecting PVE after a while to avoid unnecessary kills from other players. From there, you’re tossed right into the action the moment you step outside, fighting off skeleton warriors as your journey begins. V Rising follows you along with a solid starting tutorial which begins early on with simple crafting and slowly brings you to building your very first castle. This doesn’t take long at all and it’s easy to pick a spot close to your starting area in the East or West Woods but be sure to journey out a bit, that way you’re not right next door to another vampire’s castle. This will help with resource management later on, saving you from fighting for nearby resources with a vampire you can see right out your front gate.

Resource management is a huge part of V Rising as it not only takes Blood Essence (taken from killing flesh and blood creatures and animals) to power your Castle, but it also takes significant amounts of Lumber, Stone, Bones, and a plethora of other reagents and resources found across the map, from killing monsters and other things, or simply from venturing around and discovering things hidden in treasure chests or stashed away in lock boxes. The more resources gathered, the bigger and more advanced you can build your castle, set the boundaries of your land, and create machines and other items to assist in refining goods and keeping you and your castle safe. Keep in mind when you finally start acquiring enough resources to build at will is that you can only make each castle so big as there’s a limit on the amount of space each castle can use. As you need to lay down borders before you can build anything on top of them, be sure you construct those borders in such a way that not only makes future building for your castle as easy as possible, but also allows for easy traversal within. You always want to have enough space to maneuver to and from your structures inside your borders like your Saw Mill, Blood Altar, Equipment Bench, and other things to build. Giving these certain parts of your castle enough room can make using the tools like turning Lumber into wooden planks or Animal Skins into Leather faster and more efficient. Oh, and one solid tip: ALWAYS close your castle doors when you go out because anyone can walk in and drop your whole structure in a matter of minutes due to someone not locking up on their way out.

There are plenty of villages, mines, graveyards, and other such places to discover across an incredibly large map. Traversing it is not always easy with the amount and variety of enemies you come across as any time your vampire is killed, they in turn drop all their loot aside from the gear their wearing and any weapons they carried. Now dont worry as this isnt Elden Ring style where another kill before you can pick up the loot you dropped will erase that for good. This is much simpler where whenever your character perishes, they leave behind a container holding all their loot they held at the moment of death. All you have to do is go back and get it and it’s never too much of a chore or too dangerous to retrieve your gear, though it may take you some time to get back to where you died depending on how many Vampire Waygates you’ve discovered on the map. And believe me, they’re not always close and walking all the way back to where you died early on before you can start acquiring various forms to make you faster can be a bit of a chore. 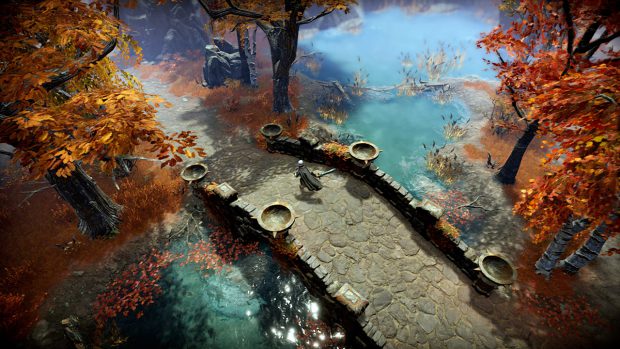 Keeping not only your castle fed with blood but your vampire as well is crucial on your ride to becoming the most powerful vampire ever. When a vampire runs out of blood, they slowly but surely die so that leaves the player with the choice of how they want their vampire to conduct themselves. Do you want your vampire only living off the blood of animals; the deer and wolves and other animals that roam the countryside, leaving the humans as nothing more than an obstacle to get around? Or will your bloodlust take over every time a human walks by, waiting for their throat to be ripped open and your thirst quenched from the blood that gushes forth? You can play it any way you prefer as drawing blood from any flesh and blood creature on the map, human or otherwise, can allow bonuses to your vampire depending on how pure the blood is. While drinking blood from animals will give your vampire the Creature trait, drinking from the various humans such as Rogues, Brutes, and Warriors can grant additional benefits. The purity of each enemies blood and the type of blood they have are clearly shown so you can easily decide how you wish to approach each living creature you see.

The action and look of V Rising is very reminiscent of Diablo with that overhead style (with a moveable camera), destructible environments, as well as fighting against creatures and “V Blood” holding boss-types, V Blood being an essence you withdraw from them at the end of battle which grants various bonuses including new spells or new structures for your castle. Resource management in the game is as simple as walking up to any tree, rock, or bush and chopping away at them. The further along you get, the more you’ll notice newer resources to collect as most everything you pick up will have a use at some point, though some things like Leather are much more rare and sometimes take a boss fight in order to find easier ways to gather them. As well, building a Research Table can grant new weapon blueprints, armor layouts, or items to add to your castle like massive windows or stone walls. Collecting items that drop from enemies like Paper can help your vampire learn these abilities faster, without the hope of a recipe randomly dropping from an enemy (though that can happen as well!). 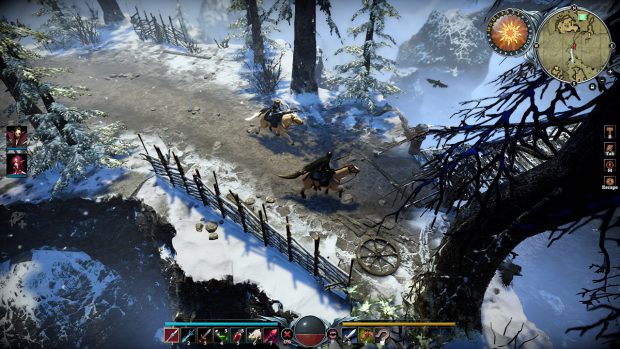 Now aside from the castle and the throat ripping and the gushing blood and what have you, let’s talk about the most important thing when being a vampire: The Day/Night cycle. V Rising runs on a long night (16 hours) and a short day (8 hours). Obviously these hours are not real-time hours as a typical in-game hour lasts a few minutes. The benefit of the long night cycle is you can choose to do more than just one thing in the evening. Say you need to do some upkeep in your castle and build up your current armor and weapons. If you have your castle set up in an efficient manor (yup, I went there), there’s no reason why you cant do all that and still head out to do some resource farming or perhaps some villager head-hunting. But fear not as the rising sun doesn’t spell certain death for your vampire if you’re caught out of bed when the big light comes on. You can do just as much damage to villagers, wildlife, or all the resources you wish in the daytime, just as long as you stay in the shadows. While you can make quick darts through the sunlight, staying in direct light for more than a few seconds will cause your vampire to burst into flames and quickly lose power. It’s incredibly easy to lose track of the moving shadows and the sun beams that make it between trees during a battle so make sure you know where the shadows are at all times or you’re BBQ. I’ve died quite a few times, especially during boss fights, just because I wandered too far into the sunlight. There was even once where I had defeated the boss and forgot all about the sun when I went to feed off him, killing myself instantly before I even had the chance to take his abilities.

I’m incredibly excited to play the full version of V Rising as I really believe they have something special here. The resource management is meaningful, the kills are satisfying especially once you get the hang of battles and are able to hold your own against hordes of enemies, and building your own castle that in itself grants buffs to your vampire and resources depending on how you build it is a really fun experience. I’m looking forward to really putting some time into it as V Rising definitely takes some dedication to get going but pays off once you start rising in the ranks of the vampires. The map is easy to make your way around and you rarely if ever run into deadends as a reward for exploring. There always seemed to be a way through, one way or another and not having that feeling that you ever had to backtrack just makes you want to explore more, especially once you’re able to do it faster than just on foot. V Rising is definitely one of those games to keep an eye on, there’s a lot of fun to be had here.