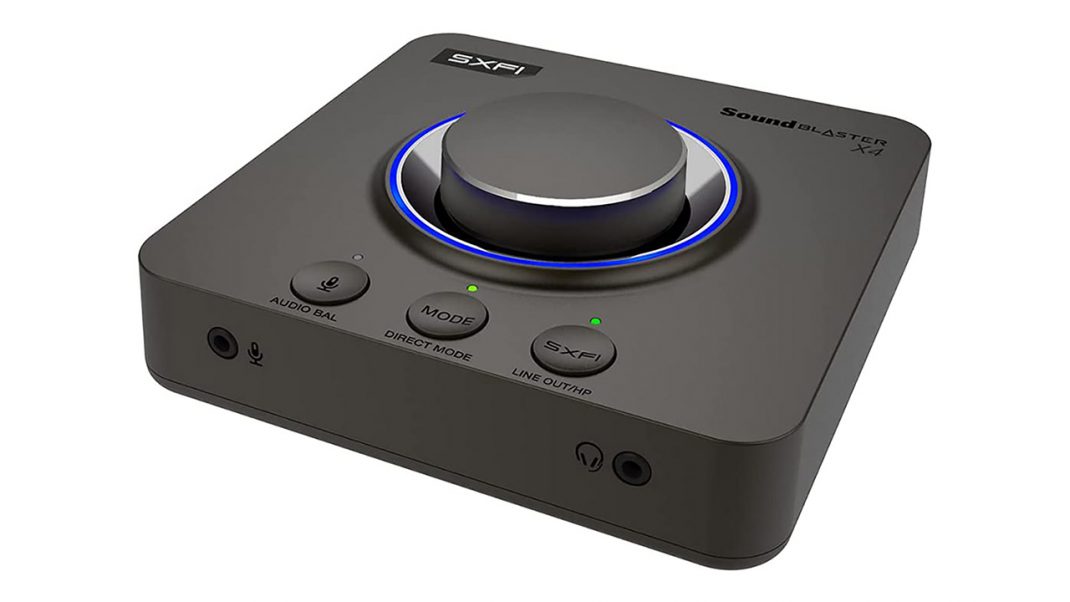 Creative Labs has been knocking it out of the park for some time with their lineup of USB DACs (Digital Audio Controller)/headphone amplifiers. The latest in this lineage is the Sound Blaster X4. Featuring a variety of input/output options and audio-enhancing features, the X4 is an incredible piece of kit. In terms of its design, the Sound Blaster X4 takes after its older brother, the Sound Blaster X3. It is 5.14 inch by 5.14 inch box with a protruding round knob on the upper side and all decked out in a gumetal gray color scheme. It measures only 1.6 inches tall, so it’s a very discrete presentation.

On the front side of the Sound Blaster X4, you’ll find two 3.5mm ports – one for an external microphone and the other for a set of headphones.The round knob on the upper side of the X4 is encircled with a pretty LED ring light. That large knob is used to control the volume as well as balance the volume from multiple inputs. Also on the upper side of the Sound Blaster X4 are three push button controls. The button on the left puts the large knob into audio balance mode while the center button cycles through the various EQ modes built in to the Sound Blaster X4. You can also customize and assign your own mappings to the various EQ modes using the Creative app (available on your PC as well as iOS and Android app stores). The right button allows you to toggle between your speaker out put and headphone output as well as engage/disengage the SXFI mode when using the headphones. 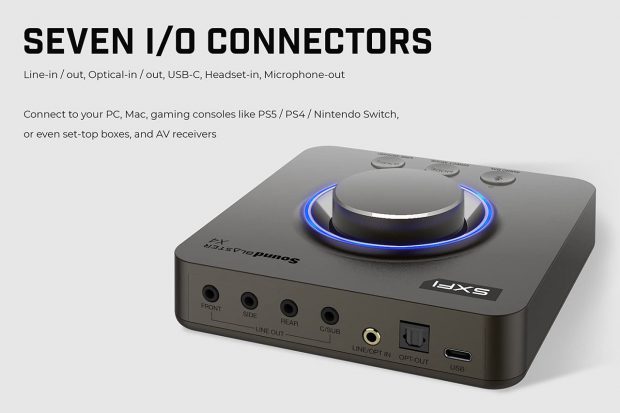 The biggest issue I had when using the Sound Blaster X4 was setting the device up via the Creative apps on my smartphone. While the Creative app is used for the main setup, you must also use the SXFI app to setup the head mapping for the SXFI technology to work with your headphones. It was not a very straightforward or user friendly process. 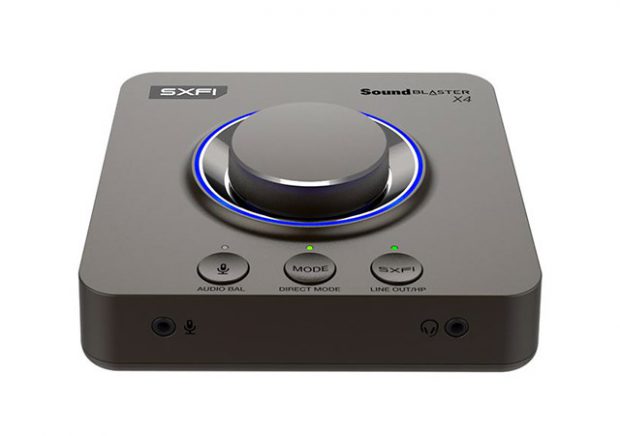 There are some interesting changes from the Sound Blaster X3 that should be noted. Strangely, the X4 only handles a maxmum audio playback resolution of 24-bit and 192 kHz while the X3 played audio back at a maximum resolution of 32-bit at 192 kHz. This doesn’t seem to make a big difference as 24-bit is still beyond what a human being can discern. Also, the Sound Blaster X3 supported a maximum recording resolution of up to 24-bit at 192 kHz while the X4 only supports a maximum of 24-bit at 96 kHz. Again, these don’t really matter in real-world usage, but I thought it important to note the differences.

In this day of virtual meetings, many companies are creative technology to help us navigate its ups and downs. Creative Labs has introduced their free SmartComms Kit and the Sound Blaster X4 is fully compatible with it. The SmartComms Kit software acts as a software noise gate to help filter out background noise while increasing the volume and quality of the user’s voice. It also allows for automatically muting and unmuting the microphone by simply detecting when the user is speaking. In my testing, it was not a “golden BB” solution to virtual meeting voice audio but it definitely helped other people hear me more clearly and I appreciate anything that can accomplish that – especially when its free!

Overall, the Creative Labs Sound Blaster X4 is a full features USB DAC and headphone amplifier with a ton of features for both audio enhancement and connectivity. The X4 is out now and retails for $149.99 on Creative Labs official website. 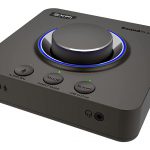