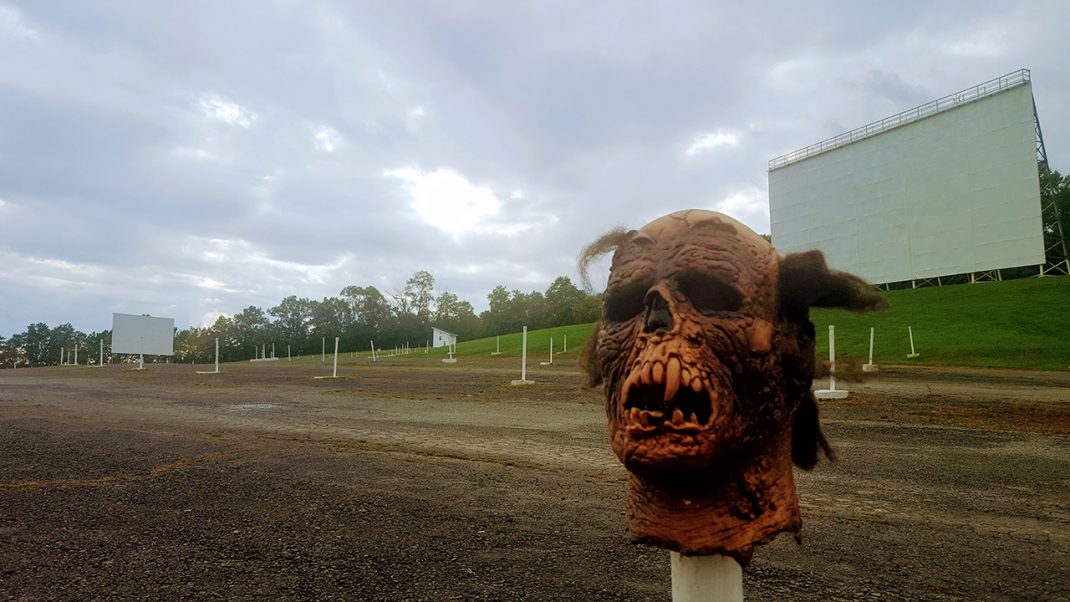 Calling all horror movie fans and drive-in movie enthusiasts! The Frankenstein Monster from 1971’s cult classic DRACULA VS FRANKENSTEIN will be returning from the dead after a 50-year rest, courtesy of makeup effects artist Roy Knyrim of SOTA FX STUDIO. The man-made monster will be making a live appearance as Sam Sherman’s Retro Road Show Drive-In Tour returns to the State of Pennsylvania with two back-to-back screenings of the Al Adamson cult classics, DRACULA VS. FRANKENSTEIN (1971) and BRAIN OF BLOOD (1971), both films celebrating their 50th Anniversary, on October 22rd, 2021 as part of THE FIRST ANNUAL BLOOD-O-RAMA SHOCK FESTIVAL at The Circle Drive-In in Scranton, PA. Gates open at 4 pm for this special event which will feature a local community Blood Drive and an opportunity to see the resurrected Monster of Frankenstein before the sun sets, and the film festival begins at 6 pm. The night will also feature two other blood-soaked movies, THE MAD DOCTOR OF BLOOD ISLAND and BEAST OF BLOOD, during the evening’s film program, as well as an opportunity to experience THE CIRCLE DRIVE-IN’s spooky Halloween haunt, THE CIRCLE OF SCREAMS! Don’t be surprised if another creature, The Beast of Blood, shows up to meet and greet fans during the evening’s drive-in festivities with free Zombie swizzle sticks. In addition, the first 100 cars that arrive at the drive-in will receive a free “Drac Pack,” which includes a plastic Dracula ring and plastic vampire fangs. (Note: One “Drac Pack” per car.) 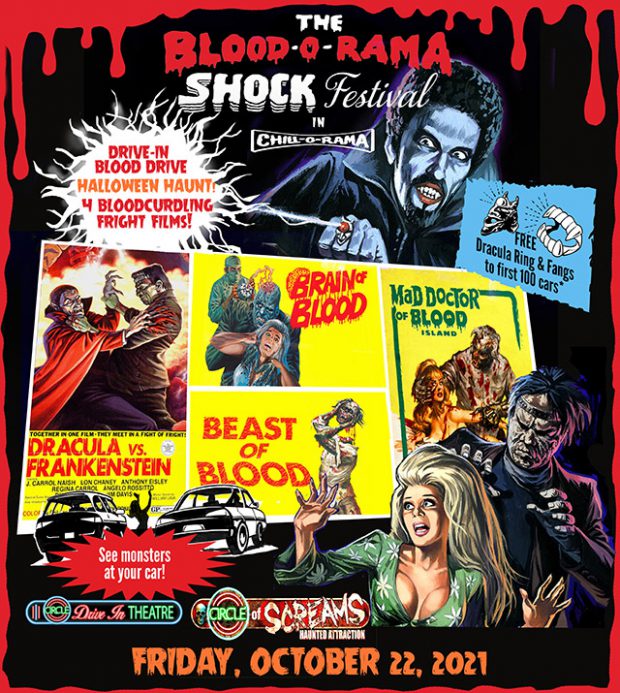 The idea for THE CIRCLE DRIVE-IN’S BLOOD-O-RAMA SHOCK FESTIVAL with the Drive-In Blood Drive and Blood themed movie event was based on a couple of producer/distributor Sam Sherman’s packaging and marketing campaigns for Hemisphere Pictures during the early 1970s, entitled THE CHILLER CARNIVAL OF BLOOD and THE BLOOD-O-RAMA SHOCK FESTIVAL. A number of the films Mr. Sherman worked on emphasized the word “Blood” in the title to lure “blood-thirsty” horror and gore fans to seek the films out at their local theatre or drive-in. Some of the film campaigns and titles Sherman worked on include BLOOD CREATURE, THE BLOOD DRINKERS, BRIDES OF BLOOD, BLOOD OF DRACULA’S CASTLE, HORROR OF THE BLOOD MONSTERS, HELL’S BLOODY DEVILS, and BLOOD OF GHASTLY HORROR. In fact, it was Mr. Sherman who was the brains behind the classic drive-in campaign and audience-participation gimmick called “THE OATH OF GREEN BLOOD” for the Tiki creature feature, THE MAD DOCTOR OF BLOOD ISLAND (1968), which is part of the festival. Mr. Sherman, a drive-in movie pioneer, just completed his memoir WHEN DRACULA MET FRANKENSTEIN (Murania Press), which will be available in limited supply at The Circle Drive-In.

The film DRACULA VS FRANKENSTEIN was also originally conceived with the crimson fluid in titles like SATAN’S BLOOD FREAKS, THE BLOOD SEEKERS and even BLOOD OF FRANKENSTEIN before Sam Sherman decided to add and exploit a classic monster match-up plot with the immortal characters of the King of the Vampires, Dracula, and the man-made Frankenstein Monster.

Sherman, who still has the original latex appliance for the Frankenstein Monster’s head used in 1971’s DRACULA VS FRANKENSTEIN, has been trying to find the original make-up man responsible for the man-made monster, Anthony Tierney. “Sadly, we haven’t found Tony, and the latex appliance for the Frankenstein Monster is deteriorating beyond repair,” Sherman relayed. However, all was not lost. Sherman and his colleague David Sehring of Drive-In-Sanity Films were referred to veteran make-up and FX wizard, Roy Knyrim of SOTA FX Studio, to help resurrect the monster. Knyrim jumped at the opportunity to tackle the Monster of Frankenstein and sought out whatever reference material he could find. Knyrim remembers DRACULA VS FRANKENSTEIN as, “One of my childhood favorites! Having the opportunity to re-create the Frankenstein Monster from DRACULA VS FRANKENSTEIN was a childhood dream come true for me. I have great memories of this movie on the Saturday afternoon Creature Features in NY. “ Knyrim added, “We are trying our best to make the Monster as accurate as possible using traditional sculpture and mold-making techniques. The same way it was made back in the day. What an honor to be able to be a part of this!”

Sam Sherman’s Retro Road Show Tour of Drive-In Cult Classics features recently restored and remastered versions of the films he made with drive-in maverick Al Adamson, including DRACULA VS FRANKENSTEIN and BRAIN OF BLOOD. In addition, Adamson’s life and tragic death and the films he made with Sam Sherman were celebrated in the recent documentary BLOOD & FLESH: THE REEL LIFE & GHASTLY DEATH OF AL ADAMSON by director David Gregory for Severin Films.

Tickets for The Circle Drive-In’s Blood-O-Rama Shock Festival on October 22, 2021, are available in advance on Ticketleap: https://circle-drive-in-theatre.ticketleap.com/blood-o-rama-shock-festival