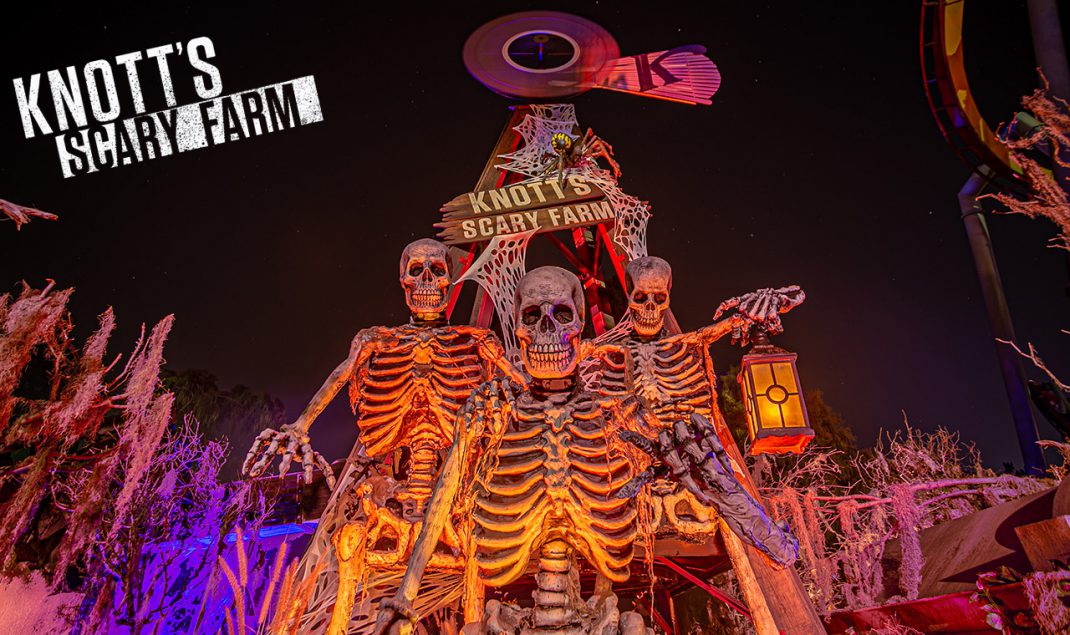 Southern California’s largest immersive Halloween experience, Knott’s Scary Farm, returns with innovative new scares and bone-chilling thrills for its 48th frightful year. Terror comes to life as the theme park shifts into your worst nightmare, with horrifying monsters and hair-raising scares looming around every turn. This year, guests will have to confront their greatest fears with 15 haunted attractions, including five sinister scare zones, eight mesmerizing mazes, and two seasonal ride overlays to some of your favorite park attractions. Knott’s Scary Farm returns for 27 terrifying nights from September 16 – October 31.

There is nowhere to hide as endless scares await guests around every corner, with the debut of our newest captivating maze, an all-new spine-chilling scare zone, and a frightening lineup of new shows. These new haunted experiences add to the original scares that can’t be found anywhere else. 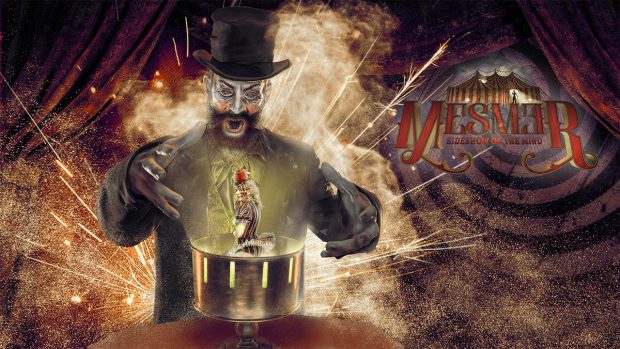 Mesmer: Sideshow of the Mind (Maze) – The newest haunted maze has arrived; Mesmer: Sideshow of the Mind. Within the canvas tent lies the secret of the most potent force in the universe: the human mind. Give in and succumb to the hypnotist Mesmer and his sinister sideshow, as it preys on your hidden fears. Release your inner thoughts and descend into a world of madness, torture, and eerie enlightenment. There you will uncover the grotesque secrets hidden as you brave through the most terrifying show ever created.

The Gore-ing 20’s (Scare Zone) – Step back into the dark decadence of a by-gone era as the newest scare zone, The Gore-ing 20’s, terrorizes even the bravest and most brutal souls. Here gangsters run illicit hooch for the ghostly revelers as the otherworldly musicians play the music of the damned. Tell the Bouncer the secret password, and you’ll have the time of your life for as long as it lasts.

Grab a seat as the show is about to begin!  Your mind will melt at the sights and sounds of the Carnaval du Grotesque. Live bands provide the soundtrack for the creepiest company of performers to ever disgrace the stage.

Invitation to terror is a digital illusion horror show which tells the story of Millionaire Tom Shackleford, he is set to unveil the secret project that he promises will change the world. Set in Calico 1986, guests are invited to the debut of Futuretronics, the world’s top technology creator, latest technological advancement. It’s going to be a killer party with plenty of terrifying surprises no one will ever see coming.

Deep within The Hollow, The Witches summon you to a percussion ritual to awaken the dead. Hosted by the evil Hag of the Hollows, Wicked Drums, high energy drumming collides with ancient witchcraft in a sensory overload sure to raise your spirits. It’s a Halloween activity worth witnessing.

The night comes alive at the stroke of midnight when our electric dance group takes the Fiesta Village stage. Dressed in colorful and vibrant colors, the lively dancers dazzle all with their moves set to high-energy music, which takes over all senses and has everyone dancing their feet off 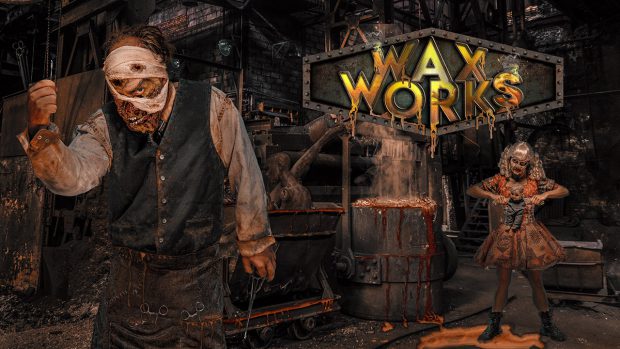 Wax Works – Mysterious lights and strange noises have begun to emanate from the eerie abandoned wax museum. It’s rumored that blood-curdling screams can be heard echoing through the halls of Wax Works as victims are horrifyingly submerged into a scorching hot cauldron of bubbling wax. The once prominent plastic surgeon, Dr. Augustus Scratch, has been seen tinkering at night and is now ready to show off his beautiful yet terrifying life-like masterpieces of hot molten wax and bloody flesh. Take a closer look at his gruesome works of art and try to escape his deadly grip or become the newest masterpiece to add to his collection. 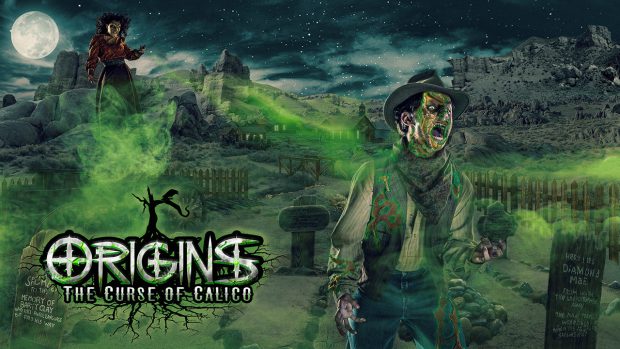 Origins: The Curse of Calico – Pierce the veil of time and discover the secret of the evil fog that hangs over Knott’s Scary Farm in Origins: The Curse of Calico. Unearth the sinister paranormal activity that plagues the town as Sarah Marshall is put on trial for her suspected crimes of witchcraft. All will be unveiled when the Green Witch rises and curses the townsfolk, transforming all who have accused her into a wicked horde of malicious creatures with an eternal quench for the living. 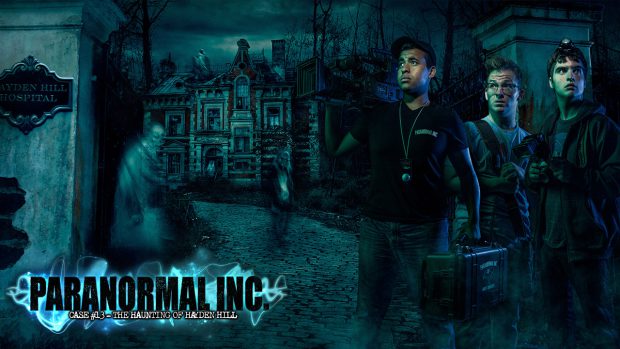 PARANORMAL, INC. – The Haunting of Hayden Hill: Paranormal Inc. maze reopens its doors one final time to those brave enough to uncover a bizarre and supernatural adventure. Guests investigate a haunted hospital where the patients were tortured for decades by deranged doctors and nurses. Demonic spirits of the murdered victims have been detected throughout the mysterious halls, while evil medical staff prowl for new patients to torture. 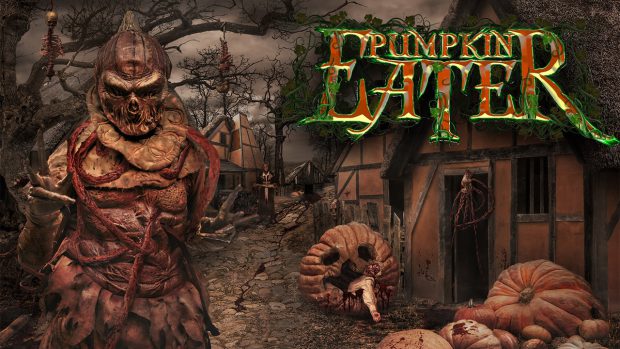 Pumpkin Eater – Survive the wrath of the murderous 7-foot tall creature that haunts the old woods surrounding The Hollow in the Pumpkin Eater maze. The notorious creature is on the prowl, hidden within the dark confines of the haunted town he once terrorized. To escape the sinister Pumpkin Eater’s wrath, all who enter must go on a quest through the silent town of victims, face a cave of crawling insects and solve the labyrinth of thorns that blocks the way out. 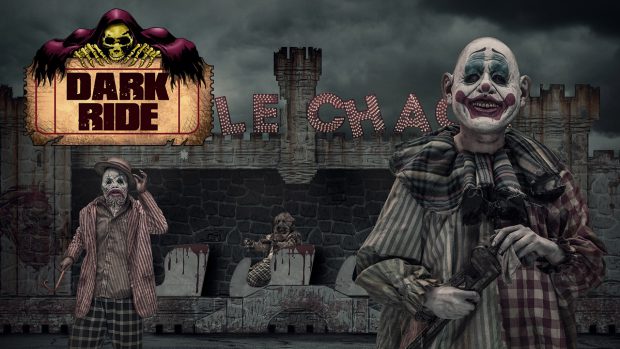 Dark Ride – Journey through an abandoned carnival ride where cruel carnie folk still linger in the shadows in Dark Ride: Castle of Chaos. The carnival has become a refuge for freaks and carnies. Now those shunned performers have created a dark world of terror which they plan to unleash on those who enter. Dark Ride will lead brave visitors through a treacherous path and into the bowels of a long-neglected attraction, as sinister shadows and horrifying scenes cast the gloom over the once pleasant ride. It’s everyone’s worst nightmare, being helplessly trapped inside an abandoned carnival ride without a way out. 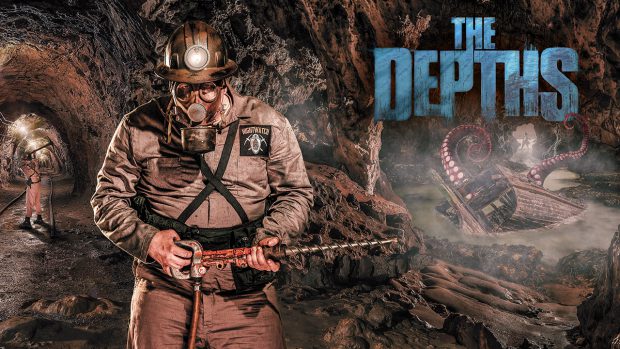 The Depths – A heavy fog drapes over an abandoned port village where ancient creatures lurk inside the pitch-black underground caves hidden below the seaside shores. The Nightwatch Mining Crew has mysteriously disappeared, and village rumors point to the eerie tunnels the town sits upon. But be warned, all who have entered have never resurfaced. Myths of the terrifying horrors that lurk within the cave have often been whispered but never confirmed.  Did the crew meet their demise at the hand of vicious creatures that live within the cave? Journey into the ominous caverns to discover if the superstitions revolving around the cave are true or not. 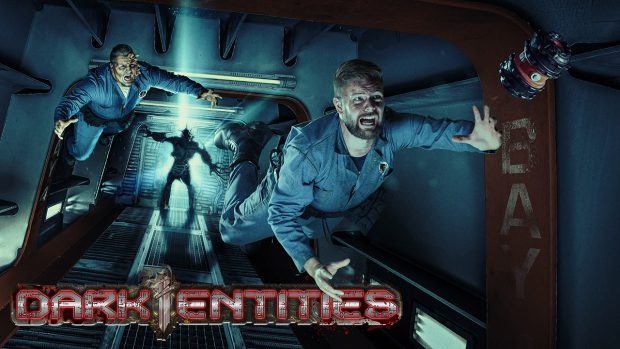 Dark Entities – Teleport beyond earth into a realm where the darkness is absolute. In the depths of space, a lone station faces terror beyond all imagination. An extraterrestrial mutation has invaded the station, and it’s on the prowl for new hosts. The unearthly inhabitants’ force increases as it feeds on its unwilling victims. Escape the dark entities before their deadly force eliminates all living forms aboard the station. There’s nowhere to escape when time is running out!

Knott’s Scary Farm is far more than a collection of haunted attractions.

Every night monsters spill out onto the streets and turn theme park midways into murderous scare zones.  From the world-famous Ghost Town Streets to the Boardwalk area filled with evil clowns, there’s nowhere to hide in Knott’s Scary Farm.

Ghost Town Streets is the original and largest, most terrifying scare zone that started it all.   Bands of half-human, half-animal monsters prowl the streets and inhabit the fog, and beware the notoriously stunning sliders, who lunge from fog-filled corners of the land.

On the Boardwalk, deviant clowns crave your undying attention in the CARNEVIL scare zone.

The Hollow scare zone will terrorize guests as the Witches of the Hollow, and their armies of creatures have risen once again to battle with the Witch Hunter.

The Lake underneath Silver Bullet recedes to reveal the Forsaken Lake scare zone, where gothic creatures ravaged by the dark and murky waters wander from their crypts preying on unsuspecting visitors, looking for victims to drag back to their watery graves.

Puppet Up! Uncensored (Show) – The Walter Knott Theater – Returning nightly to Knott’s Scary Farm for the 2021 season, Puppet Up! Uncensored is an outrageous, off-the-cuff show featuring a combination of improvisational comedy and the magic of puppetry performed by a cast of world-class comedian puppeteers from The Jim Henson Company. Created by legendary puppeteer and award-winning director Brian Henson and directed by Patrick Bristow (Ellen, Seinfeld, Curb Your Enthusiasm, Whose Line Is It Anyway?), Puppet Up! – Uncensored is no ordinary puppet show. The content is driven by audience suggestions and participation in proper uncensored form, topped with the zany antics and naughty shenanigans of the colorful and brazen puppet cast.  Puppet Up! – Uncensored will be performed three times each night at Knott’s Scary Farm and is intended for mature audiences.

You won’t believe your eyes when our skilled Illusionist takes the stage in the heart of Calico.  Get there early as seats have been known to vanish.

–  Single night tickets – Buy tickets at KnottsScaryFarm.com and save up to $39 off the regular main gate price of $89. Knott’s Season Passholders receive a discount on single-night tickets. Applicable taxes and fees apply to online orders.

– Knott’s Scary Farm Boo-Fet – Offered at Mrs. Knott’s Chicken Dinner Restaurant and Spurs Chophouse. Meals include a 2021 souvenir bottle, which gives unlimited complimentary refills on the event night and $1.00 refills for the rest of the 2021 season. After dinner, enjoy early entry into select areas of Knott’s Scary Farm a few minutes before it opens to other mortals. Boo-fet early entry will be to Paranormal Inc., Dark Entities, The Depths and Wax Works, and exclusive photo opportunities with the monsters. The Knott’s Scary Farm Boo-fet dinner is $45 + applicable taxes and fees when purchased online. Separate theme park admission is required and not included.

For more information on Knott’s Scary Farm, including admission, park hours, and events, visit knottsscaryfarm.com or download the Knott’s Berry Farm app for your smartphone. Join the scary conversation by using #ScaryFarm on Facebook, Twitter, Instagram, and TikTok.