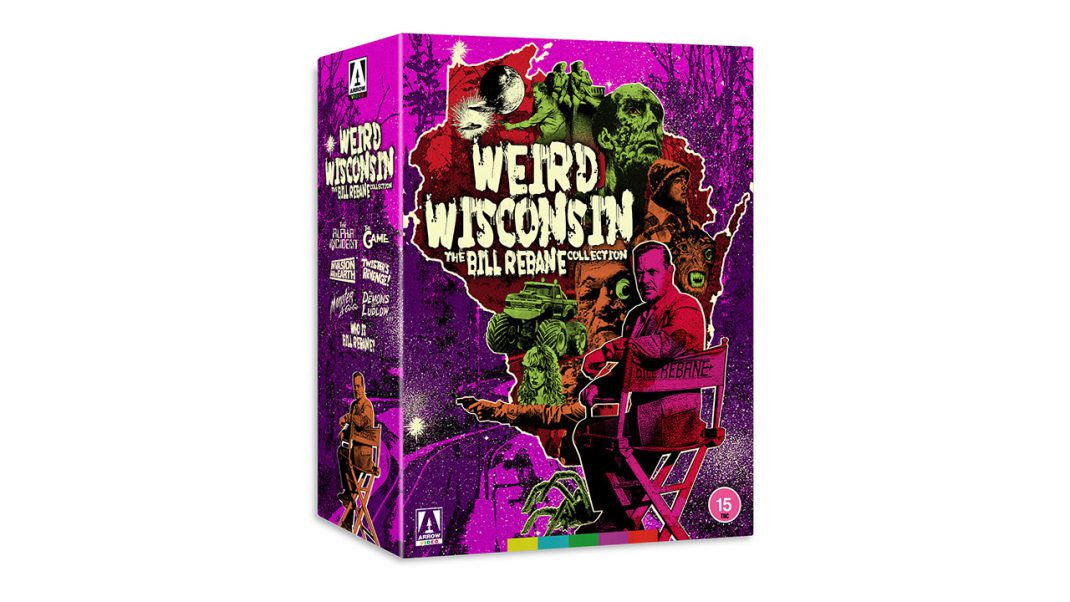 Independent filmmaker, international raconteur, Reform Party gubernatorial candidate… Who is Bill Rebane? Even if you’ve seen his work, chances are you don’t know his name. Arrow Video is out to change that with Weird Wisconsin – The Bill Rebane Collection, a celebration of a man endlessly fascinated by Hollywood and eternally working outside of it.

Much like last year’s He Came From the Swamp – The William Grefé Collection, Arrow Video has come through with another comprehensive look at a true grindhouse auteur with a level of care and craft usually reserved for Criterion’s art house box sets.

I’m going to get this out of the way up front- These are not good movies. But that’s okay! Movies like these, you know deep down if they’re for you or not. If these are your thing then chances are you’re not looking for “good” anyways.

Featured in this set are six films, just over half of Rebane’s body of work. Here are the descriptions from Arrow’s website:

Monster-A-Go-Go
American astronaut Frank Douglas returns to earth as a ten-foot-tall radioactive humanoid monster! Independent filmmaker Bill Rebane’s first attempt at a feature film began life as Terror At Halfday but was abandoned when funds ran dry. It was then bought by legendary exploitation pioneer Herschell Gordon Lewis who shot extra footage, added a voice over and released it to drive-ins as MONSTER A GO-GO! Rebane himself called it “the worst film ever made”, but it’ll still give you the wim-wams!

Invasion from Inner Earth
In the Canadian wilderness a group of pilots listen to reports of planes crashing, cars stalling and a deadly plague gripping the planet. As it becomes clear that the Earth is amidst an invasion, they barricade themselves in a cabin in the woods and wait for impending doom.

The Alpha Incident
A space probe returns from Mars carrying a deadly organism that could destroy all life on Earth! While being transported across country by train the micro-organism is accidentally released, resulting in the quarantine of an entire train station. Those trapped inside must wait for the government to find a cure while trying not to sleep, because that’s when the organism strikes!

The Demons of Ludlow
The population of a small, quiet town prepares to celebrate the bicentennial anniversary of its founding, but the town of Ludlow has a very dark past and when a piano arrives at auction, the ghosts its past return to seek retribution.

The Game
Three bored millionaires gather nine people at an old mansion to play “The Game” … if they can meet and conquer their fears and they’ll receive a million dollars in cash. But all is not as it seems!

What you’ll find here is a collection of genre work of mostly community theater and public access television quality. Broadly speaking, the acting is bad, the writing is meandering and expository at best, and the camerawork is little more than non-existent and that goes for all six movies. Bill Rebane was a businessman, however, and part of a group of filmmakers who didn’t so much set out to make good movies as make entertaining ones and these films definitely are entertaining in their own MST3K way (who not coincidentally happened to riff on two of Rebane’s films, Monster-A-Go-Go being one of them). There’s something great about seeing the seams in independent productions and Bill Rebane was a king of the DIY set. None of the films overstay their welcome either, with the shortest clocking in at just over an hour and none of the others cracking much more than the 90-minute mark. Grab some popcorn, crack a beverage of choice, and enjoy six-ish hours of so-bad-it’s-good weirdness. 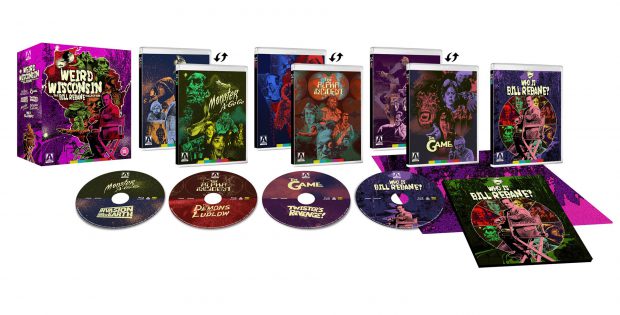 Each film here is a brand new 2K scan off of best possible elements. The transfers are as good as they’ll likely ever look, all things considered, and definitely better than any other home video releases you may have seen of these films before. Everything is in largely decent shape save for the odd scratch, hair, or discoloration that couldn’t be corrected in the transfer. The films are all presented in their original aspect rations, Monster-a-Go-Go in 1.33:1 and everything else in 1.85:1 with The Game giving the choose of either.

The audio is all original uncompressed mono, save for the stereo presentation of Who is Bill Rebane? Everything is clean and audible for the most part with any hissing or popping laying at the feet of the source rather than Arrow’s transfer.

Bottom line is you know what you’re here for and the quality of the source material adds to the charm of the films themselves.

Now this is where the set truly shines… 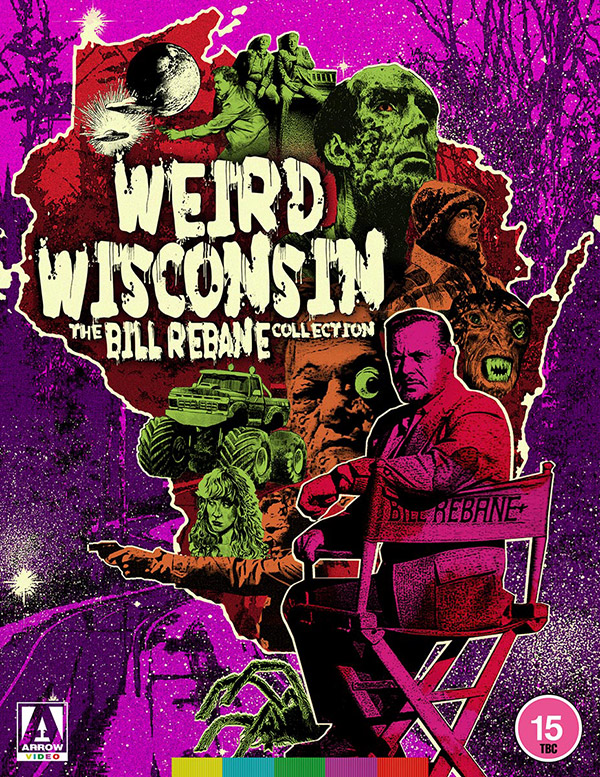 Weird Wisconsin hosts its six films and a feature length documentary across four individually packaged discs housed in Arrow’s standard high quality cardboard slipcase found in all of their usual limited releases. As per usual, each disc’s case has a double sided insert, although rather than the usual reversible new art/original art here you can choose which film to feature on the cover of each case. Finishing the set is a double sided poster and a hardbound book showcasing movie posters, original art, and From Latvia to Wisconsin: The Song Remains Rebane, an essay by Stephen Thrower.

Across all four discs are a comprehensive set of bonus features starting with trailers and still galleries for each film. Spread across all four discs are Straight Shooter, a series of interviews with Rebane himself where he offers insight and anecdotes into the making of each film. You’ll also find video essays by film historians Stephen Bissett and Richard Harland, short and industrial films from Rebane’s commercial work, and of course what Arrow release would be complete without an interview with Kim Newman?

The crown jewel of this set, however, is Who is Bill Rebane?, a feature length documentary occupying its own disc. Who is Bill Rebane? is a comprehensive look at his life, from a post-war Eastern European childhood to learning English by watching musicals at Chicago movie theaters, that puts his body of work into context. When diving into this set, I dabbled in the individual films here a bit before watching this documentary on its own. After watching Who is Bill Rebane?, I came back to the films with a new understanding and appreciation for Rebane’s creative output. With stories told by the people that worked with him, critics and historians, and the man himself, I’d recommend that anybody interested watch this first before taking on the rest of the set.

One thing of note- The documentary and many of the special features spend a great deal of time speaking of films not found in this set, The Giant Spider Invasion being most notable. These films do have quality releases from other distributors if you want to seek them out.

It’s rare that a collection of movies comes along that, while you’ve never heard of them, you know is one hundred percent your jam. I’ve been fortunate enough that Arrow Video has released two of them in the last year between this and last November’s excellent William Grefé collection.

Even though some of Rebane’s more notable films are conspicuously absent, this set more than goes the distance for low-budget genre enthusiasts, film history completists, or anyone whose curiosity gets tingling at the mention of haunted pianos and sentient monster trucks.

If this seems at all like your thing- trust me, you know if it does- don’t sleep on this labor of love for Bill Rebane, an unsung hero of the Midwest. 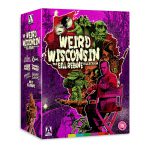