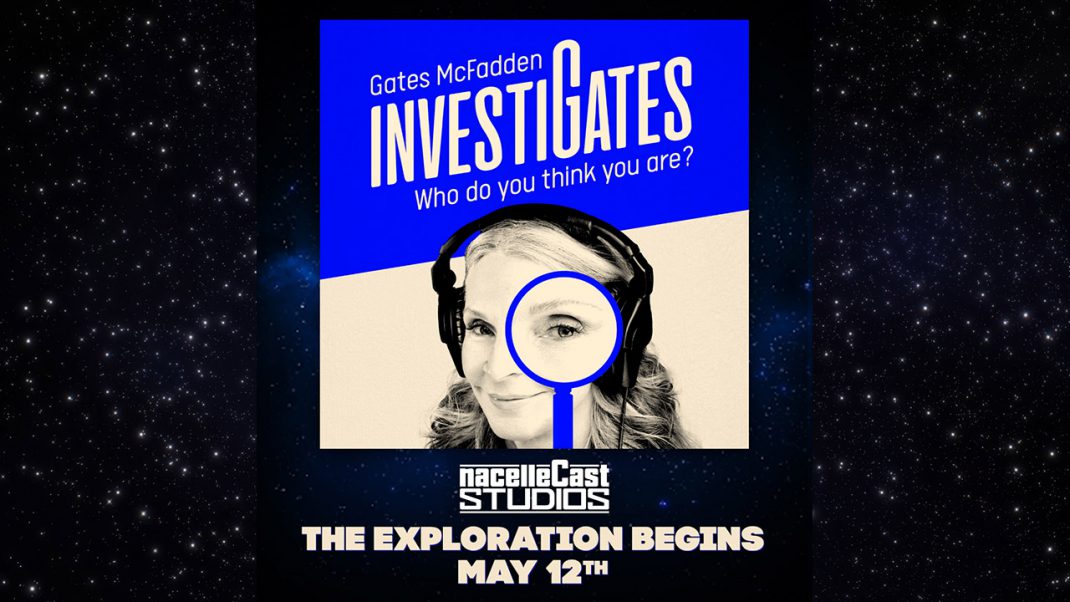 The Next Generation’s Gates McFadden Has Her Own Podcast

NacelleCast, the people behind Netflix’s The Movies That Made Us, The Toys That Made Us, and Down To Earth with Zac Efron, as well as Disney+’s Behind The Attraction announced that actress, director and choreographer, Gates McFadden, will debut her new podcast InvestiGates: Who Do You Think You Are? through Nacelle’s podcast network on May 12th. The company recently opened NacelleCast Studios, a state-of-the-art podcast studio next to their production offices in Burbank, which serves as the main podcast studio for all NacelleCast productions.

Gates McFadden InvestiGates: Who Do You Think You Are? is a limited podcast series where Gates invites some of her best friends such as Jonathan Frakes, LeVar Burton, Will Wheaton, Brent Spiner, Marina Sirtis, Michael Dorn, John Delancie, Robert Picardo, Michael Westmore, Nana Visitor, Denise Crosby and more to have one on one, intimate conversations unlike any Star Trek fan has ever seen or heard before. Whether you’re the biggest Trekkie, or a casual watcher, this podcast offers never before heard stories from some of the people who made Star Trek one of the most successful franchises in history.

Gates McFadden is an actress and choreographer best known for her portrayal of Dr. Beverly Crusher on Star Trek: The Next Generation, Star Trek: First Contact, Star Trek: Generations, Star Trek: Insurrection and Star Trek: Nemesis. Early in her career, Gates worked at The Jim Henson Company working behind the scenes as a Director of Choreography and Puppet Movement on films such as Labyrinth and Dreamchild.

For many years, she was a faculty member of some of the most prestigious university theatre departments in the USA, and was honored with the George Burns Teaching Fellowship while teaching at USC. A NYC actor who transferred to Los Angeles when she was cast on Star Trek, she nevertheless continued acting and directing in LA. While Artistic Director of EST/LA, she built the multi-space Atwater Village Theatre which has become a theatre headquarters in Los Angeles.

“I can’t say I know the ins and outs of podcasting, although I am learning, but I do know how to be funny and silly, serious and truthful, and ultimately, how to have lively conversations with my extraordinary group of close friends from the Star Trek series. An no, we don’t dissect the episodes, we speak about our lives,” said Gates McFadden.

“We’re deeply honored to be releasing Gates’ first podcast! I’ve been a Trekkie for over 35 years, and I’ve learned more from these shows than the last 100 conventions I’ve gone to combined!” said Brian Volk-Weiss, Founder and CEO of The Nacelle Company.

The podcast will be available on Spotify, Apple Podcasts, Stitcher, Podbean, Amazon Music and more starting May 12th.