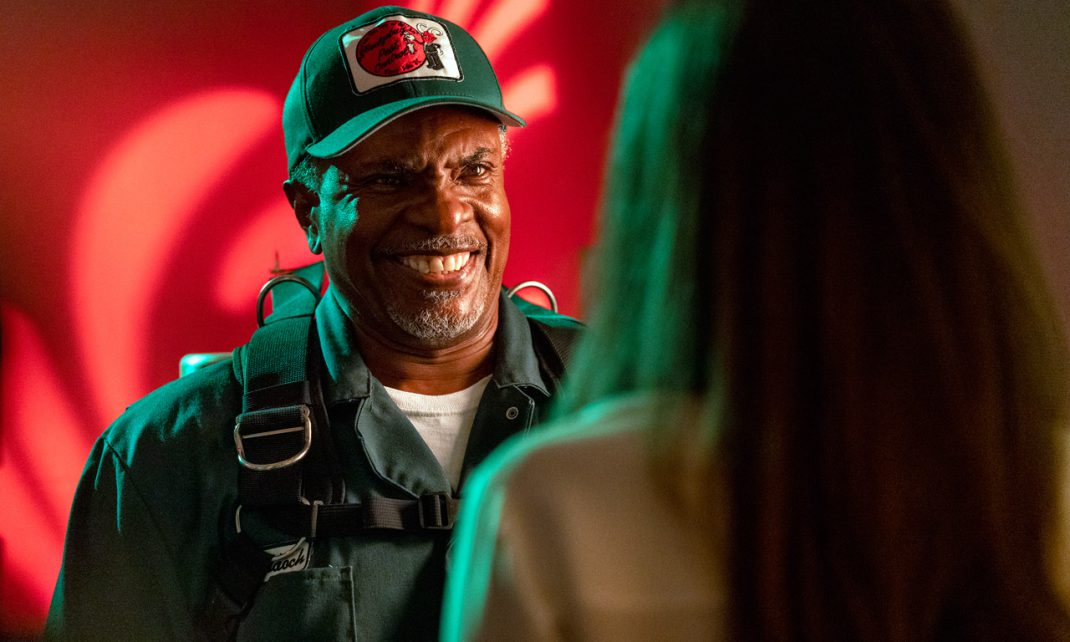 April showers bring a packed lineup of new horror films and series to Shudder, AMC Networks’ premium streaming service for horror, thriller and the supernatural, for its annual ‘Halfway to Halloween Month.’ With April marking the halfway point to Halloween, the streamer will celebrate its biggest month of programming yet with a loaded slate of Shudder original films and series, an exclusive documentary, a library of cult classic favorites and the return of ‘Halfway to Halloween Hotline.’

“Some do Christmas in July but at Shudder we celebrate Halloween in April to mark the halfway point to the greatest holiday of the year,” said Craig Engler, general manager of Shudder. “‘Halfway to Halloween Month’ is going to be the biggest month of programming in Shudder history with new movies, series, a killer documentary and more.”

Series and film details included below.

Based on the 1982 horror comedy classic, the anthology Creepshow returns for a second season and is still the most fun you’ll ever have being scared! A comic book comes to life in a series of vignettes, exploring terrors ranging from murder, creatures, monsters, and delusions to the supernatural and unexplainable.  You never know what will be on the next page. Executive produced by showrunner Greg Nicotero, Creepshow’s second season will feature guest stars Kevin Dillon, Iman Benson, Josh McDermitt, Keith David, Molly Ringwald, Barbara Crampton, Justin Long, and D’Arcy Carden, among others.

Four years after South Korea’s total decimation in Train to Busan, the zombie thriller that captivated audiences worldwide, acclaimed director Yeon Sang-ho brings us Peninsula, the next nail-biting chapter in his post-apocalyptic world. Jung-seok, a soldier who previously escaped the diseased wasteland, relives the horror when assigned to a covert operation with two simple objectives: retrieve and survive. When his team unexpectedly stumbles upon survivors, their lives will depend on whether the best—or worst—of human nature prevails in the direst of circumstances. Upon Peninsula’s premiere, Shudder will be the only service in which viewers can watch Yeon Sang-ho’s complete trilogy, including Train to Busan and Seoul Station, on a single platform.

London, 1974. As Britain prepares for electrical blackouts to sweep across the country, trainee nurse Val (Rose Williams) arrives for her first day at the crumbling East London Royal Infirmary. With most of the patients and staff evacuated to another hospital, Val is forced to work the night shift, finding herself in a dark, near empty building. Within these walls lies a deadly secret, forcing Val to face both her own traumatic past and deepest fears in order to confront the malevolent force that’s intent on destroying everything around her.

From acclaimed director Chris Smith (Creep, Severance, Triangle) comes The Banishing, which tells the true story of the most haunted house in England. A young reverend and his wife and daughter move into a manor with a horrifying secret. When a vengeful spirit haunts the little girl and threatens to tear the family apart, the reverend and his wife are forced to confront their beliefs. They must turn to black magic by seeking the help of a famous Occultist…or risk losing their daughter.

The hit original series returns with Briggs, the world’s foremost drive-in movie critic, presenting eclectic horror movie double features, interrupting the films to expound upon their merits, histories and significance to genre cinema. The show’s hashtag, #TheLastDriveIn, has trended in the top 10 on Twitter in the US during the premiere of every episode and special, often reaching No. 1.

In April 2021, Shudder partners with FANGORIA to bring the Chainsaw Awards, hosted by actor and writer David Dastmalchian, to fans across the globe. This year’s nominated films include The Invisible Man, Freaky, Relic, Color Out of Space and Possessor as well as actors Vince Vaughn, Kathryn Newton and Elisabeth Moss. Since 1992, the Chainsaw Awards have honored top achievements in horror film and television, with past recipients including Jonathan Demme, Sam Raimi, Robert Eggers, Toni Collette and George Romero.

Welcome to Six Mile Hill, a sleepy Irish backwater whose only claim to fame is the somewhat dubious local legend that Bram Stoker once spent a night in the local pub. It’s home to Eugene Moffat, a young man who fills most of his days drinking pints with his friends and pranking tourists who come to visit the gravesite of Abhartach, a legendary Irish vampire some believe to have inspired ‘Dracula.’ When a personal tragedy forces Eugene to go and work for his gruff, no-nonsense father, he finds himself on the site of a controversial new road development that threatens to destroy the town’s livelihood. But strange events unfold when Eugene and the crew tear down a famous cairn believed to be the final resting place of Abhartach, and they soon come under attack from a sinister force that has infected one of their workmates. As the night closes in, The Boys must fight for survival while discovering the true horror of a myth that hits much closer to home than any of them realize.

Building on the hit 2019 superdoc that Forbes called “a scary good magnum opus,” In Search of Darkness: Part II dives deeper into the fabled practical-effects decade of iconic and eclectic ‘80s horror movies that changed the course of film history. Packed with over four hours of brand-new interviews, including such legendary horror icons as Robert Englund (A Nightmare on Elm Street), Nancy Allen (Dressed to Kill), Linnea Quigley (The Return of the Living Dead), and special-effects wizard Tom Savini (Friday the 13th), Part II features 15 new faces alongside 40-plus returning members of the original In Search of Darkness cast to delve into more fan-favorite titles of ‘80s horror, year-by-year, expanding its scope to cover more international releases and spotlighting horror-career retrospectives.

An anthology of six interconnected horror short films, Deadhouse Dark is anchored by a woman who receives a ‘mystery box’ from the dark web, each item within it gradually unveiling a dark and troubling truth. A boxful of dark and chilling tales of terror inspired by frighteningly familiar modern trends including dark web mystery boxes, dash cam footage and Insta-fame hungry vloggers. Deadhouse Dark is a giant mystery box of chocolates – while there is something in there to suit a variety of different tastes, in the end chocolate is still chocolate. And who doesn’t love chocolate?

Every Friday in April from 3pm-4pm ET, members are invited to call Samuel Zimmerman, Shudder’s director of programming, to discuss all things horror: from their favorite genre films of all time to the most highly anticipated horror releases of the year.  From those conversations, Sam will then use his horror expertise to offer customized viewing recommendations from Shudder’s expansive film collection.

A new hotline phone number will be announced each Friday on Shudder’s social media platforms.

**While recommendations are provided for free, please note that normal phone and long-distance charges may apply. Call volume is expected to be high, so please keep trying if a busy signal is received. There are no guarantees that every call will be answered, but Sam will get through as many as he can within the hour.**

Coming to Shudder just in time for Easter, in this cult classic, an Arizona rancher dealing with massive rabbit overpopulation calls on a local college president, Elgin Clark, to help him. In order to humanely resolve the matter, Elgin brings in researchers who inject the rabbits with chemicals. However, they fail to anticipate the consequences of their actions.

After her daughter’s death, wealthy American homemaker Julia Lofting moves to London to restart her life. All seems well until she is haunted by the ghosts of other children while mourning for her own.

Chainsaw-wielding maniac Leatherface is up to his cannibalistic ways once again, along with the rest of his twisted clan. This time, the masked killer has set his sights on a pretty disc jockey, who teams up with a Texas lawman to battle the psychopath and his family deep within their lair, a macabre abandoned amusement park.

Best known as Mexico’s homage to A Nightmare on Elm Street, in this film, Michael is gifted a Ouija board from his best friend, Tony, on his seventeenth birthday. Tony unwittingly unlocks the evil forces of the board, unleashing a wave of violent killings, and the chief suspect appears to be Michael.

When the illegal human experiments of a Korean pharmaceutical company go wrong, one of its undead test subjects escapes and ends up in a gas station owned by the Park family. When the Park family uncovers the undead visitor, they hatch a plan to exploit this unexpected fountain of youth.

Known for being a pioneer in the found footage genre, this film centers on a typical fall evening in 1983 when a young man videotapes his niece’s 5th birthday party. As the night’s strange occurrences take place, he keeps his video camera running, recording the entire event.

Two cult favorites from the acclaimed Spanish master of horror who most recently directed and co-wrote HBO Max’s 30 Coins: The Day of the Beast (1995), in which a priest, TV psychic and Death Metal record store clerk team up to beat Satan and prevent the Apocalypse, and Dance with the Devil (a.k.a. Perdita Durango, 1997) starring Rosie Perez and Javier Bardem as a sadistic couple involved with human sacrifices, kidnapping, murder and fetus trafficking.

Jerry Blake is a family man, but he happens to have a series of families, with each one on the receiving end of his murderous ways. When Jerry sets his sights on a lovely widow named Susan and her headstrong daughter, Stephanie, it appears that his brutal pattern of killings will continue. However, Stephanie begins to suspect that there’s something wrong with the seemingly well-adjusted Jerry, and a violent confrontation is inevitable.

Leo and Elvis are cleaning up a particularly messy crime scene when Elvis accidentally finds a secret passage that leads to a subterranean living space. He encounters Thale, a beautiful young woman who sings but does not speak. The two are ill-prepared when others tracking Thale finally catch up to her.

A documentary about conspiracy theories takes a horrific turn after the filmmakers uncover an ancient and dangerous secret society.

A young woman is forced to return to her childhood home after being placed under house arrest, where she suspects that something evil may be lurking.

Eight people experience a strange phenomenon while waiting for a bus at a remote station on a rainy October night.

A single mother and her children are awoken nightly by an intense presence. She asks her scientist boyfriend to destroy the violent spirit that paranormal experts are too frightened to take on.

For centuries, a demonic cult has been plotting the destruction of mankind. When a small Colorado town is overrun by a legion of mutating demons, three non-demon hunter friends must use every skill their minds can fathom to stave off the demon apocalypse.

While travelling on the Trans-Siberian Express, an anthropologist and his rival must contain the threat posed by the former’s cargo: a prehistoric ape which is the host for a lifeform that is absorbing the minds of the passengers and crew.