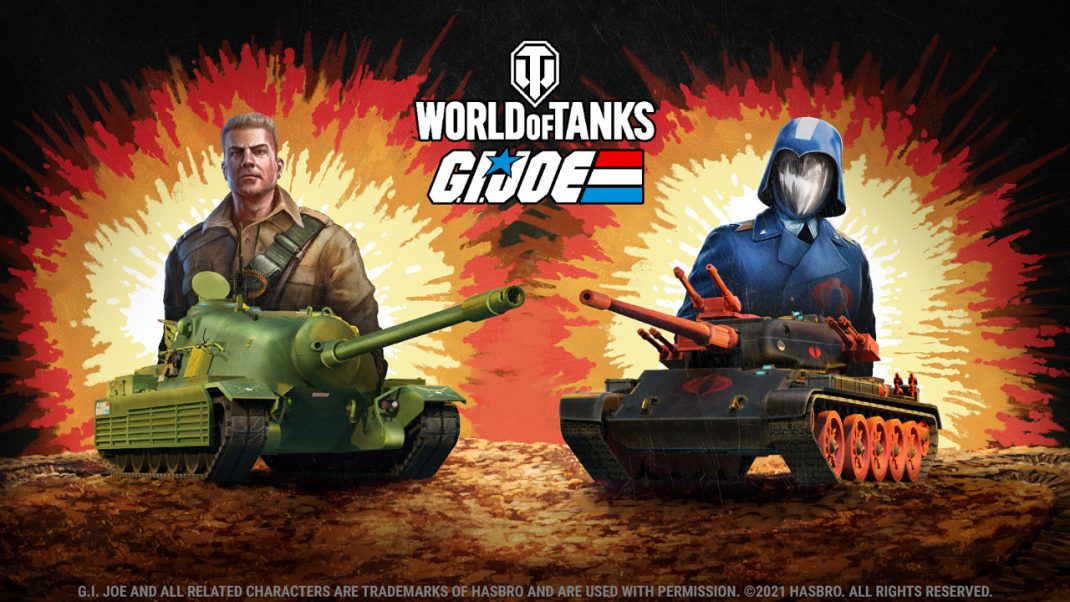 Wargaming is excited to announce that Hasbro’s iconic G.I. JOE characters, Duke and Cobra Commander, are joining the fight in World of Tanks. Today tankers will be able to get their hands on two extra special 3D styles: one for the TS-5 (G.I. JOE Team) and one for the T-54 first prototype (Cobra). Additionally, World of Tanks is delivering G.I. JOE-themed missions, decals and emblems to its players, and from March 18, two unique crew commanders will be available through Prime Gaming.

The G.I. JOE toy line was like none before it. It added backstories to its colorful heroes, menacing villains and featured intricately designed military vehicles to transport its soldiers into action. Now the adventure continues as millions of World of Tanks players can take command of the G.I. JOE B.T.T. (Breakthrough Tank) and the Cobra B.O.A (Battle Operational Assault) in
the struggle for freedom. Both vehicles are designed specifically for the World of Tanks battlefield and are unique to the game! The G.I. JOE B.T.T., based on the TS-5, will take the fight right to Cobra’s front door. In retaliation, Cobra has engineered the B.O.A., built on the foundation of the T-54 first prototype, to menace any who are foolish enough to face it. As an
exclusive to Prime Gaming Club members, Duke and Cobra Commander can be recruited as crew captains on March 18.

“For years, the characters of G.I. JOE have captured the playtime of an entire generation as they recreated epic battles with toys and imagination,” stated Max Chuvalov, Publishing Director, World of Tanks. “Now that generation is grown, and there is no better way for them to revisit the joy of G.I. JOE than in World of Tanks! It really is a perfect combination, and we are happy to deliver it!”

Alongside the B.T.T. and B.O.A., tankers will also get unique decals featuring the legendary G.I. JOE M.O.B.A.T. (Multi-Ordinance Battle Tank) and the COBRA H.I.S.S (High Speed Sentry) vehicles, as depicted on their original package art. In addition, G.I. JOE themed inscriptions and emblems are available by completing of a series of in-game missions. The iconic Cobra and G.I. JOE emblems will help players declare their allegiance on any tank in their garage. Since “knowing is half the battle,” head on over to the dedicated article for more information
about G.I. JOE in-game offerings for World of Tanks: https://worldoftanks.eu/news/general-news/gi-joe-customization/