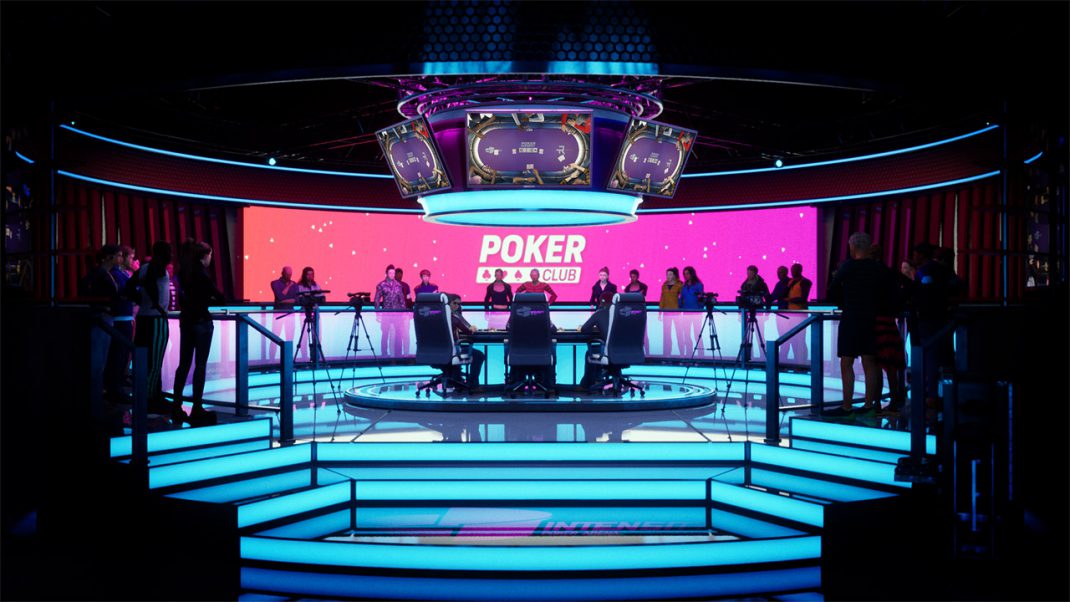 Texas Hold ‘Em is my absolute favorite card game. I’ve played for almost twenty years from small home games with friends to full on poker tournaments in Las Vegas. So when I heard how in-depth the brand new Poker Club was to be, I jumped on the opportunity to give it a go and see if the fun of Texas Hold’em translates in 2020 through a non-cash video game.

Poker Club delivers just that: Texas Hold ‘Em in different ways, be it a cash buy-in tournament, head-to-head one-on-one games, and a few other varieties that give Texas Hold’em a little more life than just your standard poker game. However, if you’re looking for anything else aside from Texas Hold’em, this isn’t the game for you. Only slight variances of the original game are offered in Poker Club.

One thing I noticed is how the tables and cards look incredibly realistic. Checking your cards will show actual lines in the paper cards much like real cards would have. It’s subtle but I noticed it instantly and thought things like that are an excellent touch to make it feel like you’re really there at a table. Aside from what goes on right at the table, other things however dont look as crispy. The character models are PS3 generational looking and many of them look identical. For a game that rewards things like in-game clothing and accessories for your character, I found myself bypassing unlockables altogether as there just wasn’t anything special about any of the items and no matter how much stuff you put on your character to look original, there’s a good chance he or she will look just like the person next to them with some slight changes in hair style and clothing colors. Plus, when an item is unlocked in the store, you still have to use the in-game currency to purchase them, the same currency purse you draw from to pay for tournament entry fees or to buy-in on games that might already be rolling. While the amounts to purchase the unlockables isn’t terrible, it’s pretty much pointless when player characters are constantly mirroring others from table to table. 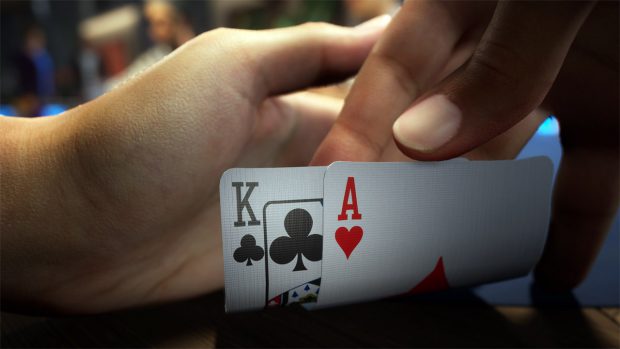 The game variations are fun and laid out in a menu style that reminded me a lot of Bugbear’s excellent demolition derby title “Wreckfest”, where all the different matches and tournaments are listed out that you can join and you’re free to play them as you choose, or skip some entirely. You dont need to plow through every table in order to unlock more which is good for those who may not want to play in a head-to-head match and would prefer more along the lines of a full table. One thing it doesn’t tell you though is what tournament or table you’re currently bought in for if you were to turn the game off then come back later. I cant count how many times I’ve loaded all the way into a table just to be ejected because it’s not the tournament I left when I last played. Going back to how Wreckfest laid out it’s similar menu, if you were to try and enter a race which was not the one you had last entered but not completed, the game will inform you that you’re already signed up for a race and that you can choose another one and lose your progression in the process of the one you’re already in. Poker Club doesn’t do that and instead allows you to sit there as the table loads up, just to be forced back to the main menu.

Speaking of times, be sure you have a lot of spare time to play Poker Stars because there’s quite a lot that adds to the time of just a single hand. The amount of time AFK players have before they’re skipped is a bit long but even such things as dealing out the flop after everyone has placed their bets take extra beats where nothing at all is happening on screen. While it’s just a few seconds, these seconds add up when it comes to players checking their hands, being AFK, taking their time in general to check, bet, or fold, and the like. Poker Stars can really up it’s game by cutting these seconds across the board and tightening up just how long it takes to play a single hand. While I was able to win an 18-person tournament at one point, it took about three hours for the game to complete and coming from having played massive Texas Hold’em tournaments, sometimes with upwards of 40 people, a tournament with that many people running at the speed Poker Club takes to deal out hands would cause those matches to be days long. Along with that, winning the tournament got me some $ towards more tournament entries and items, there wasn’t anything worth actually winning. I felt after hours of sitting there and being patient, playing my hands like I normally would, and actually winning the tournament, some sort of special cosmetic item might drop as a reward for taking the top prize in an 18-man tourney. Instead it was back out to the main menu to choose the next table. Winning something like a multi-table poker tournament in a video game should be much more rewarding than the same prize you get no matter what table or variant you play at. It honestly felt that, while I did win, that it had been a waste of time because where’s the fun in winning something like that in a videogame? 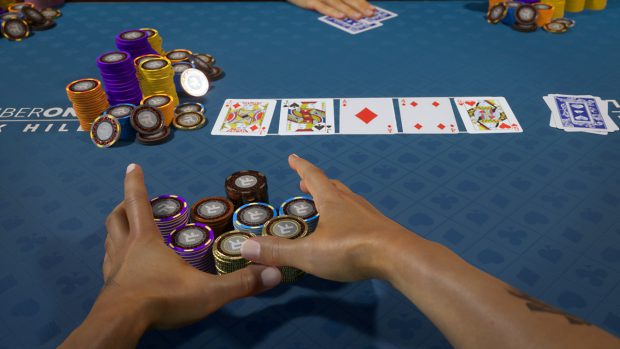 One thing I absolutely fault Poker Club for is a complete lack of a soundtrack worth listening to (Yes, it’s my typical gripe for any game). For a game that does indeed take hours at a time to play sometimes, some decent background music to listen would be fantastic. Instead, Poker Club offers generic sounding background noise and ambiance which of course puts you in the world of a poker tournament but do absolutely nothing to keep you entertained. I have Spotify constantly running in the background due to how long these matches can be so that I can have something actually decent to listen to while I play. Another stand out issue is that, while you are playing with real people (and a few bots at times), there’s no actual real money exchanging hands at any point so you’ll always get people going all in at strange times or with weird card combinations on the table, and I feel that some of these players might be doing this because the game itself is so slow and they just want to get the game moving and get people eliminated so a final table can be made earlier, the game can be finished faster, and the like. It’s almost too easy if you’ve got enough patience to simply wait people out to make bad plays simply because they’re impatient. It takes a lot of the realism away from a poker game that’s hampered by the fact that you’re not actually playing for real money.

Poker Club is a lot of fun if you’re a big Texas Hold’em player and have a lot of free time to burn while the game cranks away from one hand to the next. I did have fun playing Poker Club for a little while but the lack of rewards and creative options for your characters, as well as how slow the tables run once you’re actually sitting at them really made the game more of a chore after a while than something worth playing. If Poker Club can go back in with a lot of freshness added to character models, rewards, and accessories, and trim the time down from hand to hand, there’s definitely something special here and could be a lot of fun, especially for friends who want to get together in the age of COVID for a fun poker tournament.