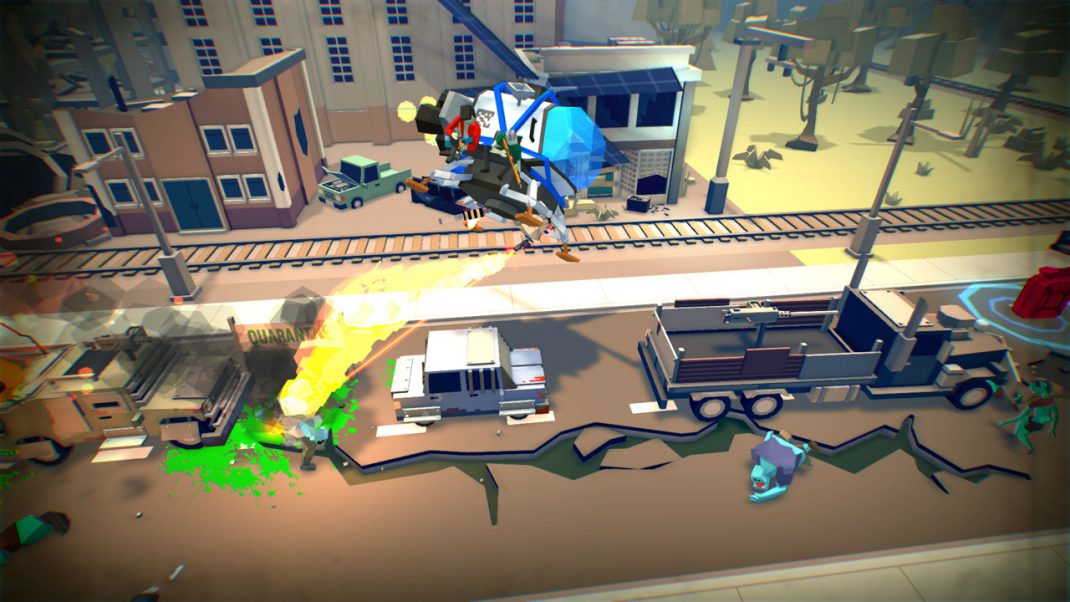 Dustoff Z is an upcoming flying, shooter from developer Invictus Games and Zordix Publishing.  The latest game in the Dustoff series, Dustoff Z is set during a zombie apocalypse where you pilot a helicopter to rescue survivors, find supplies, or take on zombie bosses.   This being my first Dustoff game, I had no idea what to expect going in, and I can say that I was pleasantly surprised with what I found.

The one thing that Dustoff Z does poorly is tell a compelling story.  I hate to start off with a negative during this review, but promise that it will be all uphill from here.  The intro to Dustoff Z starts off with the protagonist sitting near a police helicopter, when zombies appear and attack.  You fly off, with your partner firing at the zombie horde and the game begins.  However, the game doesn’t begin right were the intro ends, instead you are now flying a makeshift helicopter, made out of car parts and other junk, and are safely within a fortified area while the rest of the world burns in the zombie apocalypse.

The story line progresses from there, kind of.  There are some cutscenes, but they really don’t tell you about a story or what your goals are as a whole, more like they are designed to break up the game levels with something different.  For me, the lack of an intriguing story isn’t a deal breaker.  I have played and loved many games that were about as deep as a frying pan.  When a story is almost non-existent, however, the game has got to grab you in other ways, and Dustoff Z does just that. 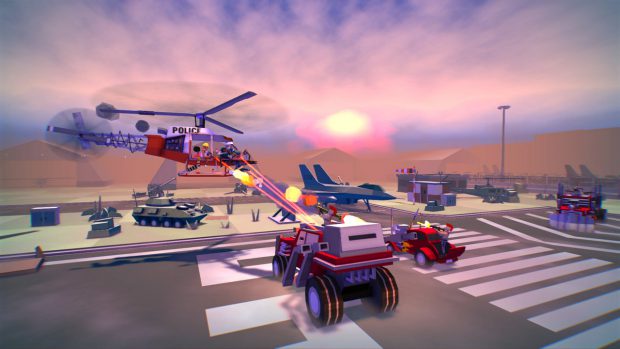 One of the main reasons why Dustoff Z really grabbed me is how similar it is in game play to one of my favorite games as a kid, Choplifter.  The essential game play of Dustoff Z is centered around flying your helicopter around and completing objectives.  These objectives will vary depending on the level, from picking up survivors, to escorting convoys, and picking up supplies to build walls.  Most of these levels will award you 0 to 3 stars, depending on how well you accomplish what you needed to do.  Other levels will see how well you did something and award you based on that, then allow you to replay that mission to beat your score.  For instance, how long can you escort a convoy under heavy attack.

The basic game play seems simple enough, but the devil is in the details with Dustoff Z.  As you fly around, you have to manage three things:  your fuel, your health, and your ammo.  You also need to hire your gunners for each mission, and each gunner has different weaponry with different stats and abilities.  To refill any of these meters, you must kill zombies beneath or above you and they have a chance to drop items that will refill one of the three meters.  The other option is to land at a helipad if you run across one and save your progress.  Once saved, all your meters are automatically recharged.  At the end of each mission, you earn money, food and gears that will allow you to upgrade your gunners and helicopter.  You can also find and unlock different paint jobs along the way.  As you progress in the game, you will unlock different helicopters and gunners, all with different abilities and stats.

Where Dustoff Z really shines for me, though, is the physics of the game play.  Sure, you can shoot at the zombies below you, but man is it a little more satisfying to drop buildings or containers on the lot of them.  Environments are interactable and items can be grabbed with the winch of your helicopter and swung around.  However, swinging items like that will also affect the flight path of your helicopter, making it tougher to maneuver.  Having zombies climb up and grab your helicopter affects the way it flies as well, and having too many zombies grab you will drag the copter down to the ground.  Death is a minor set back, however, as you can pay 50 coins for an immediate resurrection right at the spot you died, or choose to save your money and restart the level.

I’m not sure if it was purely the nostalgia feeling of Dustoff Z reminding me of playing Choplifter on the Apple IIe or what, but I really enjoyed the game play and the physics of this game.  The early levels were deceptively easy, and had lulled me into a false sense of security.  As the levels progressed, so did the difficulty curve, whether it was more zombies being thrown at you or having to maneuver your copter through tighter and tighter spaces. 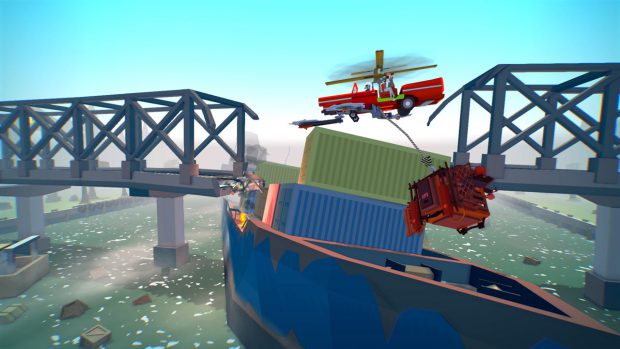 Dustoff Z’s aesthetics are a series of interesting choices.  Most of the game looks like Crossy Road got invaded by the undead and armed itself.  The people have no real faces to speak of; no eyes, no noses, but will have facial hair.  The zombies are the same way, but look more like you are being attacked by a horde of orcs rather then the actual undead.  The zombies are varied in their appearance, which is great.  You will run into zombies with wings, zombies with bombs, zombies with machine gun arms, zombie sharks, and 50 foot zombie bosses wielding shields.  The graphics are done in a very cartoony way, but one that fits the overall aesthetic and makes the game enjoyable rather then detracts, like other games that I have played within the last year.

The sound design is done well.  The sound effects do the job in making the game riveting.  The music is pretty much unforgettable, so nothing really special there.  I was surprised to hear that the characters are fully voiced over during the cutscenes and gameplay.  This was a welcome surprise, however, I did find that the gunner chatter became repetitive during the gameplay.  The voice acting isn’t the greatest there is either, but it does the job.

Dustoff Z is a fun, arcade style game that offers a nice challenge in quick and easy bites.  It’s the type of game that you intend to play only for a few moments while you have some spare time, but find yourself sinking in far more than you expected just to beat the level that’s been giving you a headache for the last ten minutes.  While nowhere near perfect, Dustoff Z is just pure fun, but that may be due to its similarity to one of my old favorite games that I played as a kid.  There is no real storyline, no real character arc, and the voice acting is pretty bad, but Dustoff Z is still worth a look, in my opinion, especially if you are looking for a light arcade type shooter.  Dustoff Z will be released for PC on October 15th on Steam.