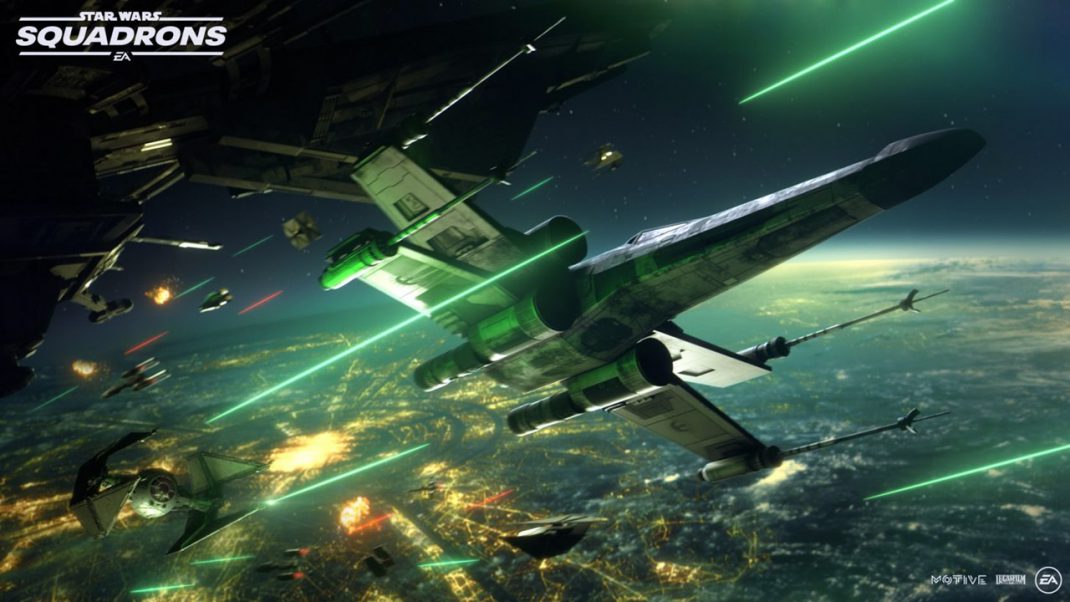 Strap in pilots, and prepare for battle! Today, Electronic Arts Inc. (NASDAQ:EA), Motive Studios and Lucasfilm released the highly anticipated immersive, first-person, Star Wars™ space dogfighting experience, Star Wars™: Squadrons. The game features thrilling 5v5 multiplayer starfighter combat along with an original Star Wars story set after the events of Star Wars: Return of the Jedi™. Polygon even says, “Star Wars: Squadrons is every inch the spaceflight simulation that fans have been dreaming of for a generation.” In the authentic new story, players will speed to the frontlines of an escalating conflict experienced from the alternating perspectives of two customizable pilots, one serving the New Republic and the other the Galactic Empire.

Star Wars: Squadrons offers the option to play in thrilling Virtual Reality on PS4 and PC, enabling players to feel every drift, evasion and maneuver as if they were in the cockpit. Mastering the skills and controls to become an ace pilot in the Star Wars universe is no easy feat and players looking to test their abilities and fully embrace the pilot fantasy can tune their difficulty in-game and take full control of their ship with hands on throttle-and-stick (HOTAS) support on PC, PlayStation® 4 and Xbox One.

“As a lifelong Star Wars fan, it’s been an incredible journey to bring the space combat experience to life in a way that is true to the legacy of the franchise,” said Ian Frazier, Creative Director, Motive Studios. “It all starts in the cockpit, the center of the action. We’ve worked hand-in-hand with Lucasfilm to hone in on the pilot’s perspective, and match the aesthetic from the films to create an authentic Star Wars gameplay experience that will transport fans into the pilot’s seat. We’re thrilled to bring this experience to players around the world, who can now join together in battles across the galaxy.”

Players can start their adventure in Star Wars: Squadrons and develop their piloting skills in a fulfilling single-player story showcasing daring pilots and rival commanders, flying for freedom with the New Republic or upholding the Galactic Empire’s vision of order. At the heart of the story is Project Starhawk — a starship project critical to the New Republic and one the Empire seeks to eliminate. Across multiple missions in a full campaign, players will report to two leaders: Lindon Javes, commander of the New Republic’s Vanguard Squadron, and Terisa Kerill, commander of the Galactic Empire’s Titan Squadron, whose deep-seated rivalry will fuel many of the encounters throughout the story.

Star Wars: Squadrons features intense 5v5 multiplayer combat in two key modes, Dogfight and Fleet Battles. In Dogfight, players will work with their squadron to execute the best tactics and destroy as many opponents as possible, while in Fleet Battles, players join their squadron in large scale, strategic back-and-forth battles to demolish opposing flagships. Squadrons will also give players the chance to bring their own personality to their starfighters with customization options that are earned solely through gameplay.

“We are always looking to bring new Star Wars stories and experiences to our fans,” said Douglas Reilly, Vice President, Lucasfilm Games. “Star Wars: Squadrons places players at the apex of one of the most uncertain times between the New Republic and Galactic Empire, where the scales of power could be tipped in either direction, and the fate of the galaxy is still unclear. We’re thrilled to give players the opportunity to play their Star Wars pilot fantasy and experience this original story.”

As players earn their stripes and progress in the game, they will be able to collect components including Primary Weapons, Auxiliaries, Countermeasures, Hulls, along with Shields and Engines to fine tune the performance of their starfighters, which can be equipped with up to three passive components and four active components. Star Wars: Squadrons features eight iconic New Republic and Imperial starfighters from four starfighter classes: Fighters, Bombers, Interceptors, and Support ships, with a power management system that allows players to divert power to particular subsystems including engines, lasers or shields to outsmart opponents.

After launch players can expect additional online experiences including daily challenges to earn Glory, an in-game currency earned solely through playing, to unlock starfighter and pilot cosmetics, and Operations, which are 8-week cycles bringing their own set of cosmetic rewards to be earned along with new challenges. Players will also earn experience through play, and as they level up, will unlock Requisition points that can be used to unlock ship components to modify their playstyles.

Additionally, the official soundtrack for Star Wars: Squadrons from Walt Disney Records is now available at digital service providers including Spotify, Amazon Music, Apple Music and more. Composed by the masterful Gordy Haab, and recorded with a world-renowned orchestra, the soundtrack includes 26 pieces from the game with a retro, stylized feel reminiscent of the iconic films that launched the Star Wars franchise decades ago.

Star Wars: Squadrons is now available both digitally and in stores for $39.99 on Xbox One, PlayStation® 4 and PC via the EA Desktop App, Steam and the Epic Games Store, with Virtual Reality (VR) support on PlayStation® 4 and PC. EA Play* subscribers can enjoy up to 10 hours of playtime at launch, along with 10% off the purchase of the full game and immediate access to additional in-game perks including cosmetic items like the Interceptor Elegance Helmet and the Ashen Monarch Paint Job Set. EA Play* Pro subscribers will get full access to Star Wars: Squadrons on PC along with all the benefits of EA Play for as long as they subscribe. For more information on Star Wars:Squadrons, please visit: https://www.ea.com/games/starwars/squadrons