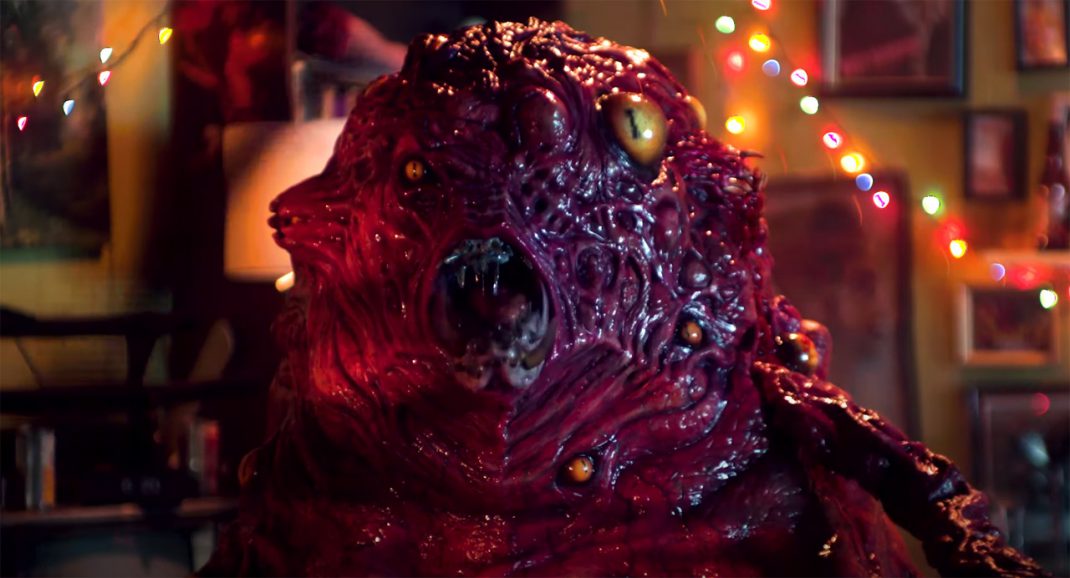 In CARRION, you play as a creature being studied deep in what looks like some hidden science facility. You creep through a 2D, side-scrolling world full of soldiers and scientists, slowly taking over the lab one dark corner at a time. The Carrion creature you play is a sort of blob, full of tentacles and pseudo-pods that launch out in all directions and keep you floating above the ground. Some of your tentacles will obey commands and help open up door, ducts, humans, that kinda thing. Carrion’s creature looks like a mix between something out of a John Carpenter movie and Meatwad from the Aqua Teen Hunger Force… but with lots of extra mouths and so many teeth. We can’t forget those shiny whites as they chew up everyone in sight! 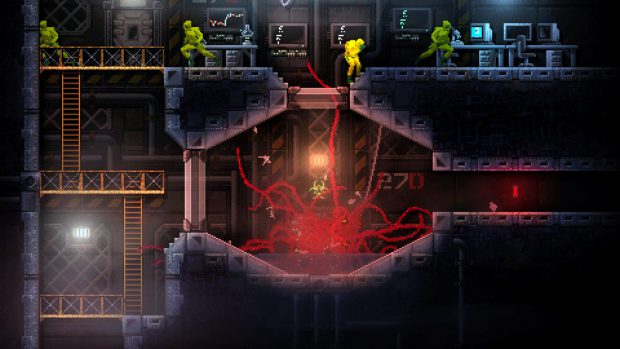 The main power you start off with is pretty impressive and easy to get used to along with cruising around, getting used to opening things and eating everyone in sight. The learning curve can get a little steep when you get more powers and abilities – especially when some require you to “change your mass”.  This means finding more people to eat to get the creature’s mass up to a size – or – leave part of its mass in a puddle to do things at a smaller scale. After completing the task you needed to shrink down for, you get your mass again and work a bigger skill. Figuring out what you need to do for different parts can be a bit challenging sometimes but it all feels worth it when you show off your powers, tearing a lab and its occupants to itty-bitty pieces.

Enemies ramp up in difficulty, which is to be expected, but a couple of enemies in and you start to hit ones that have shields and flame throwers. They can be killed, after a lot of work, but you can’t consume them to help recover from the fight. I had a decent amount of deaths from a couple of them that were walking a room together and they weren’t even close to being one of the big baddies. Coming back after dinner and getting more play in, I had to get my moves back down again after getting a little rusty from taking a break. It’s worth it though for the satisfaction of using those skills to cause lots of little people on the screen to scream. 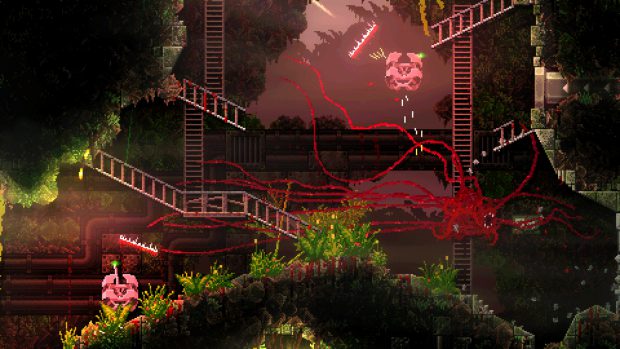 Graphics and audio for a game like this could have gotten some grief but the developers played it smart by setting the whole game in a retro graphics style. The music can get intense, the bodies get ripped apart into bits with a little blood and some barely identifiable body parts. It helps make the game silly and fun instead of a serious and repulsive. It can be considered anti-horror in some ways since you are playing the creature who is trying to ensure its future by spreading itself into little pockets all over the station while the guards are looking for you. It reminds me a lot of Universal Monsters films in that way since you can feel somewhat sympathetic for the creatures. Even the name of the creature, Carrion, has a certain stigma to it since carrion is dead and decaying flesh. It makes you wonder if it needs to feed on dead and decaying flesh or is that what it is composed of, just a big wad of red, rotting meat. There may be moments where you change your form a bit to get past some obstacles which makes for a nice change even if the new forms made my skin crawl a bit.

The background is nice and crisp and has a retro look helps add to the creep factor in the game. I also like that there is a decent variety to the rooms – but not quite enough to keep me from getting lost a lot. When I would get lost I would think that I wasn’t lost I just wasn’t changing my mass or entering in a grate in front of me. Then, after wandering around in what just seemed like circles a while, I would find a puzzle I needed to do that I had been missing. My only other issue in the game was sometimes the tentacles didn’t grab what I wanted, I would come into a room full speed trying to flank an enemy and instead of locking onto him the tentacle just kinda went a different way leaving them the opportunity to turn and blast the heck out of me while I made a run back for the grates. I thought it was me at first but after dying a few times only to have it “just work” makes me wonder… 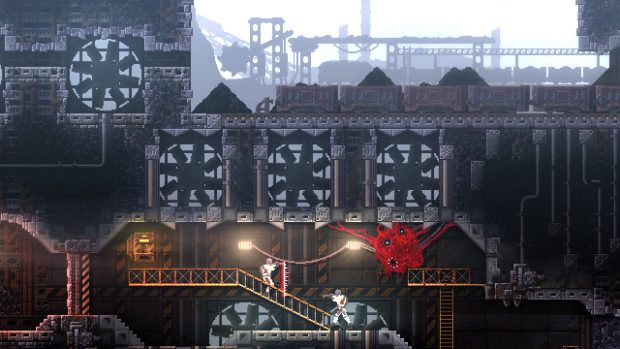 Carrion is a wicked fun game where you get to be the beast instead of the brunch and cruise smoothly along on tentacles eating every scientist and soldier you see. The play time isn’t that long but it has nice replayability where you choose how to clear the halls and make your new home. The 2D retro style adds a lot to the game taking what could be serious horror to a campy feel instead with little puzzles and powers that progress along with you. I know I’ll be playing it again with a big smile on my face as the red tentacles fly. 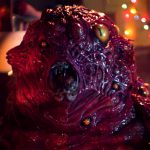