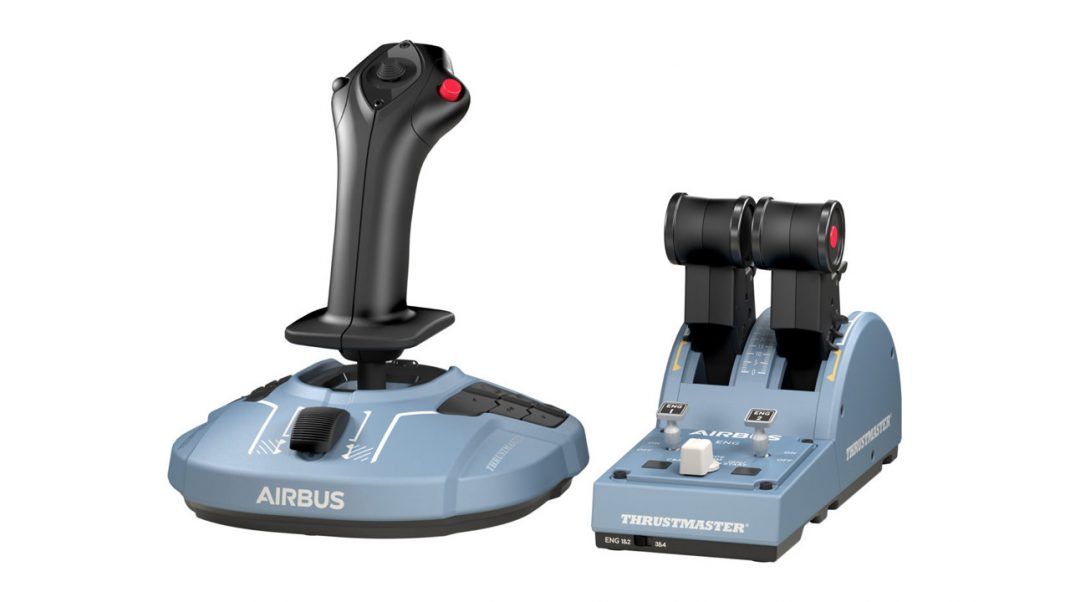 Rennes, June 18, 2020 — Now cleared for takeoff with its brand-new range of civil aviation flight sim accessories, Thrustmaster is thrilled to be getting its new partnership with Airbus off to a flying start by launching four exciting new officially-licensed products compatible with PC (Windows® 10, 8)*, in addition to its eagerly-awaited TM Flying Clamp, to mark the occasion. It’s also the perfect way to celebrate Thrustmaster’s milestone of thirty years in the business: the manufacturer has honed its skills and developed a unique level of know-how in the world of flight simulation, cementing its reputation as one of the global leaders in this high-tech sector.

Designed for flawless integration in civil aviation games including X-Plane 11 and Microsoft Flight Simulator, this ergonomic replica Airbus sidestick is a versatile ally for virtual pilots in all types of flight simulation.

Featuring multiple remappable action buttons, a modular design and a wide range of powerful new features, amazing flight adventures — from space simulation to air combat — are now accessible to all users at an affordable price point.

INSPIRED BY THE REAL AIRBUS SIDESTICK

The TCA Sidestick Airbus Edition is an ergonomic replica of the Airbus sidestick (A320/A320neo type, 1:1 scale) featuring 12 remappable action buttons offering a multitude of possibilities, plus a built-in throttle axis including a unique feature found on airliners.

The design of the joystick’s head is both versatile and modular, thanks to its swappable button modules. You can easily adjust the sidestick’s configuration before each takeoff, for the best fit: captain, co-pilot, or with the sidestick in the central position for solo flight.

The throttle built into the base of the joystick includes a thrust reverser function, a unique feature on airliners. This is a major advantage in terms of helping you master related maneuvers, and ensures that your landings are always perfectly controlled.

The rudder (Z-Axis) can be used by rotating the sidestick’s handle, to make flying easier for multitasking pilots, or for a more realistic airliner flight experience.

To properly celebrate the launch of its civil aviation product range, Thrustmaster has taken the opportunity to create a fantastic companion device for its new sidestick: the TCA Quadrant Airbus Edition.

The TCA Quadrant Airbus Edition features 8 ergonomic physical action buttons (plus 8 virtual buttons on the thrust levers, for a total of 16), which are replicas of Airbus airliner controls (A320neo type). Feel realistic sensations when using the buttons, detents and other controls — just like a real airline captain.

For even more realistic use with four-engine aircraft (Airbus A380 type), two throttle quadrants can be linked together!

PILOT ANY TYPE OF AIRCRAFT

The stepped mode is inspired by its counterpart found on Airbus airliners, with iconic detents.

Mechanical selectors let you disable the detents and thrust reversers for flexible piloting of any type of aircraft.

The TCA Quadrant Airbus Edition is also compatible with the Thrustmaster TFRP and TPR rudder systems (sold separately), for even more immersive and full-featured flight.

If you are looking for a truly complete experience, allowing you to function as a virtual airline captain, Thrustmaster has got you covered.

For all those who really want to take their piloting experience to the next level in one fell swoop, the TCA Officer Pack Airbus Edition lets you get your hands on both new Thrustmaster TCA products — the sidestick and the throttle quadrant — at the same time.

1- Ergonomic 1:1 scale replicas: sidestick and throttle quadrant inspired by those found on iconic Airbus airliners, officially licensed by Airbus.
2- Joystick featuring 4 swappable head button modules, 12 remappable buttons, built-in throttle, plus rudder control by rotating the handle (lockable/unlockable).
3- Throttle quadrant featuring 2 navigational axes, with 16 buttons and controls (detents, switches and even a thrust reverser mechanism) for a multitude of possibilities during takeoff, in flight, upon landing and when on the ground.
4- Contactless magnetic sensor technology, with no potentiometers, for an unlimited lifespan and optimal precision.
5- Compatible with the Thrustmaster T.Flight Rudder Pedals (TFRP) and Thrustmaster Pendular Rudder (TPR) rudder systems, as well as with the TM Flying Clamp (all sold separately).
6- Just plug and play: both devices are automatically recognized in the games Microsoft Flight Simulator and X-Plane 11.

The TM Flying Clamp is the cherry on top of this wide-ranging launch.

Long requested by Thrustmaster’s fans for inclusion in its range of products, the TM Flying Clamp will now be joining the brand’s advanced flight sim ecosystem.

Crafted of 100% metal, the TM Flying Clamp is a must-have for gaming sessions without a cockpit, ensuring realistic, safe and comfortable use.

Developed to facilitate enhanced gaming ergonomics for all users, the TM Flying Clamp is a solidly-built solution for use with popular Thrustmaster product ranges (TCA Airbus Edition [Sidestick, Quadrant and Quadrant Add-On], and T.16000M FCS [joystick and throttle]).

This adaptable, non-slip system can be installed and removed quickly, easily and securely. The TM Flying Clamp is an ambidextrous system, and can be used in two different ways — either to the left or to the right of the virtual pilot.

With T.A.R.G.E.T you can even merge all of your different compatible Thrustmaster accessories so that they’re recognized as a single USB device, for enhanced modularity and customization of gaming controls.

Be sure to follow Thrustmaster on social media, to stay up to date with all of the brand’s latest gaming news: