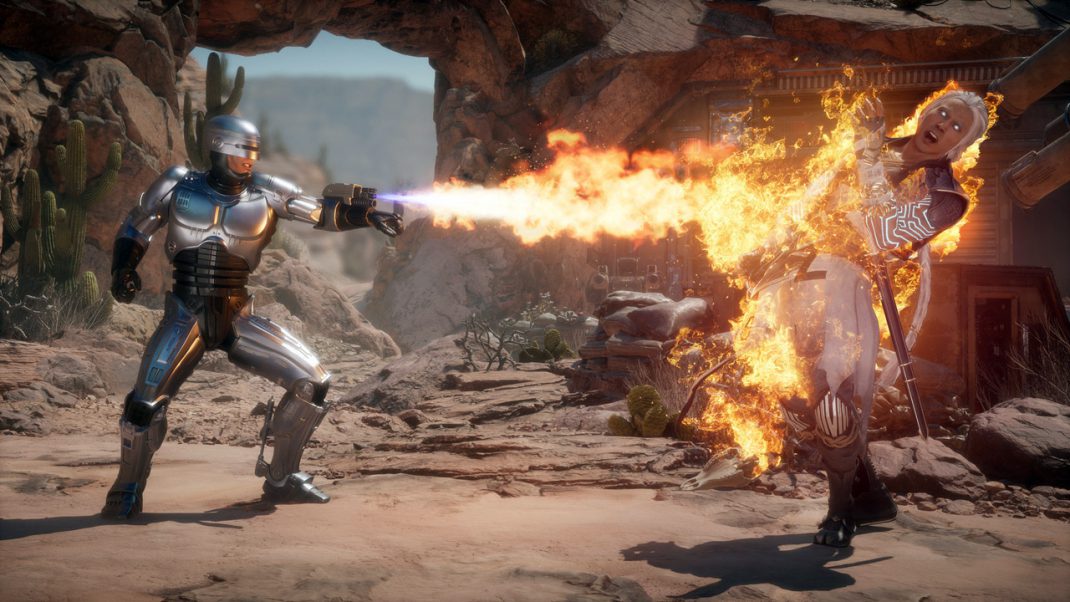 A little more than a year after the release of the main game, Netherrealm studios has released Mortal Kombat 11‘s biggest expansion to date with Mortal Kombat 11: Aftermath.  MK 11: Aftermath has a lot of content within it’s dlc package, but not all of it will cost you money.  Everyone who owns MK 11 will get three new content updates to that game for free:  new stages, stage fatalities, and friendships.  These much needed additions are a fantastic change and are very welcome as free add-ons.  This review, however, will focus on the other content that you can only get by paying the $40 to purchase the other half of the MK 11: Aftermath dlc content:  story expansion, 3 new characters, 3 new character skin packs, and a Johnny Cage exclusive skin.  Is it worth your hard earned money?  Let’s dive deeper with our full review of Mortal Kombat 11: Aftermath.

The story for MK 11: Aftermath picks up the second that the main storyline in MK 11 ends.  After Kronika’s defeat, Fire God Liu Kang and Raiden are trying to repair the damage to the timelines by using the hourglass, when they are interrupted by Nightwolf, Fujin, and Shang Tsung.  These three combatants were removed by Kronika early in MK 11’s storyline and put into the void due to keep them from interfering with Kronika’s plans.  The trio inform Liu Kang and Raiden that Liu Kang needs Kronika’s crown in order to wield the sands of time, but since he destroyed the crown during his fight with Kronika, Liu Kang must travel back in time to retrieve it.  It is decided that Liu Kang must stay with the hourglass to try to repair the timeline, and that Nightwolf, Fujin, and Shang Tsung would be sent back in time to retrieve the crown. 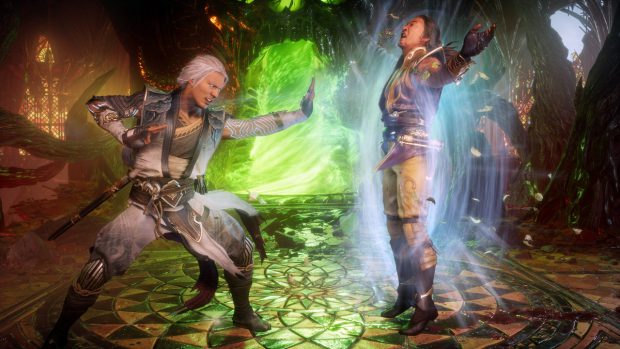 MK 11: Aftermath’s story campaign essentially has you replaying events throughout MK 11, but with some twists based on the actions of the three characters that were sent back.  There are five chapters that you will play through, playing as Nightwolf, Sheeva, Fujin, Sindel, and Shang Tsung.  Only two of the five chapters allows you to choose between two characters, the most important being the last fight of MK 11: Aftermath that determines the ending of the expansion.  Of the expansion characters, only Sheeva gets her own full chapter to shine, while Fujin must share his chapter with Sindel.

The three-hour story is a good addition to MK 11: Aftermath’s dlc content, but it does not do anything to further the storyline of MK 11.  The ending will give you a glimpse into the future, depending on who you choose for the final battle, but you will be mostly playing alternative versions of the same events that you played through in the core game.  Still, it is a very enjoyable three-hours spent and it is fantastic to get more storyline with a dlc for MK 11.   Hopefully, we can answer whether or not the $40 price tag is worth it for you by the end of this review.

Most of MK 11: Aftermath’s game play content update is free to everyone. What you get extra with your $40 is three new characters, and new skin packs.  In MK 11: Aftermath, you will receive Fujin, Sheeva and Robocop to play as in various modes.  Like other non-Mortal Kombat characters, Robocop does not make an appearance anywhere in the story for MK 11: Aftermath, but is a fun addition nonetheless. 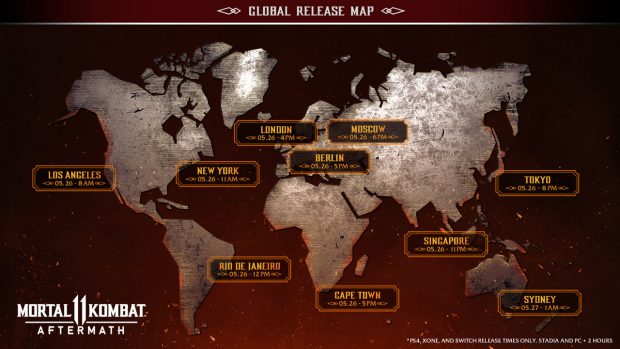 Out of the three new characters, Sheeva is easily the most interesting and needed for me.  Making her first appearance in Mortal Kombat 3, Sheeva is a fun addition to play as in MK 11: Aftermath.  Sheeva’s combos feel satisfying to pull off and she is naturally a huge close range threat, with her jump-stomp attack helping to close a range gap when needed.  Like all other new characters, she has three variations to work with, each focusing on a different aspect of Sheeva’s pool of moves.

Fujin is a little less exciting for me, but still interesting of a character to get for this dlc.  Fujin first playable appearance was in Mortal Kombat 4 and has been a minor player in the background of the MK series ever since.  Fujin is the Shinto God of Wind and is brother to Raiden, so his move sets are all based on his wind powers and sword abilities.  Fujin also has a crossbow, that can be fired in a bouncing trajectory, but is a pain in the but to pull off when needed (at least for me).

Robocop is the final new character that you get with MK 11: Aftermath, and is the most interesting in concept yet the most dull in execution.  Following the recent tradition of adding in new popular culture characters as dlc characters, everything about Robocop is based off of his movies back in the 80’s.  For those of you that don’t know, Robocop is a cyborg that was created by the OCP corporation, using the body of a slain police officer, to patrol Detroit in the future.  Voice by Peter Weller, the original screen actor, Robocop has all the moves you would expect based on his appearance in the movies.  Even his first fatality recreates some of the famous scenes from Robocop.  However, everything about Robocop feels plain.

The last content items you get with MK 11: Aftermath are three new character skin packs and an exclusive Johnny Cage skin.  While the three skin packs have yet to be released, the Johnny Cage skin is an interesting one.  It’s essentially a black and gold outfit with an open jacket, similar to some of the other skins that Johnny Cage wears.  The jacket itself can be either black or gold, and has the Netherrealm Studios logo on the back.  It’s a nice addition, but one that brings little value to the dlc.  Since the other packs have yet to be announced, I have no idea if those will bring more value for me or not. 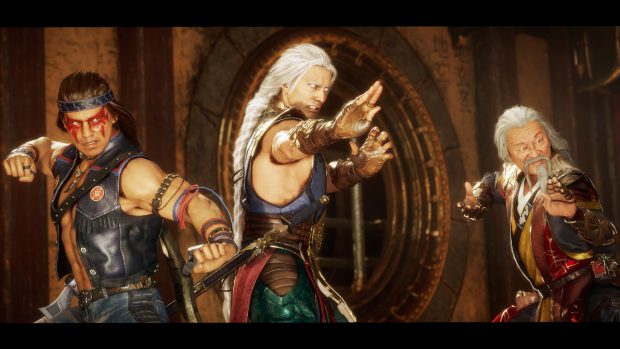 The aesthetics for MK 11: Aftermath is exactly the same as the original game.  There are no graphical upgrades, or changes in sound to mention.  The voice acting for the expansion is very well done, but the stand out is Cary-Hiroyuki Tagawa.  Cary-Hiroyuki Tagawa, the voice actor for Shang Tsung, really carries the entire storyline for MK 11: Aftermath.  He brings to the front the smugness and confidence that Shang Tsung needs for this story and is absolutely perfect in tone and in execution.  The other voice actors are just as good as you would expect from the main game.  Mortal Kombat has had one of the most convoluted storylines of any video game that I have ever played, with many reboots, restarts, and alternative timelines mixed in.  It is due to the amazing voice actors that I care as much as I do about these characters still, after 11 or so games in this universe.

MK 11: Aftermath is a hard expansion to really rate, for me.  Being a huge fan of the series, anything that adds a story element to the main game is already a must-buy for me.  But looking at this expansion objectively, is there really enough content here to justify the $40 price tag?  We don’t even know what costume packs we are getting in the future, but I guess that isn’t any different then buying into a season pass for a game anymore.  The storyline is fantastic, and the three new characters are great additions, but $40 just seems a little steep for me, for what you actually get in this expansion.  If you are a massive fan of the Mortal Kombat series, then I have to recommend that you pick up MK 11: Aftermath, it is a great addition to a great game and continues the story from the original perfectly.  If you didn’t like the story, or are not interested in any of the characters that are available in MK 11: Aftermath, then I feel that the free content of this expansion will serve you well and you can pass this by.  Overall, your mileage will vary with MK 11: Aftermath, as will your desire to pick it up at the $40 price tag.  MK 11: Aftermath is available now on Steam.