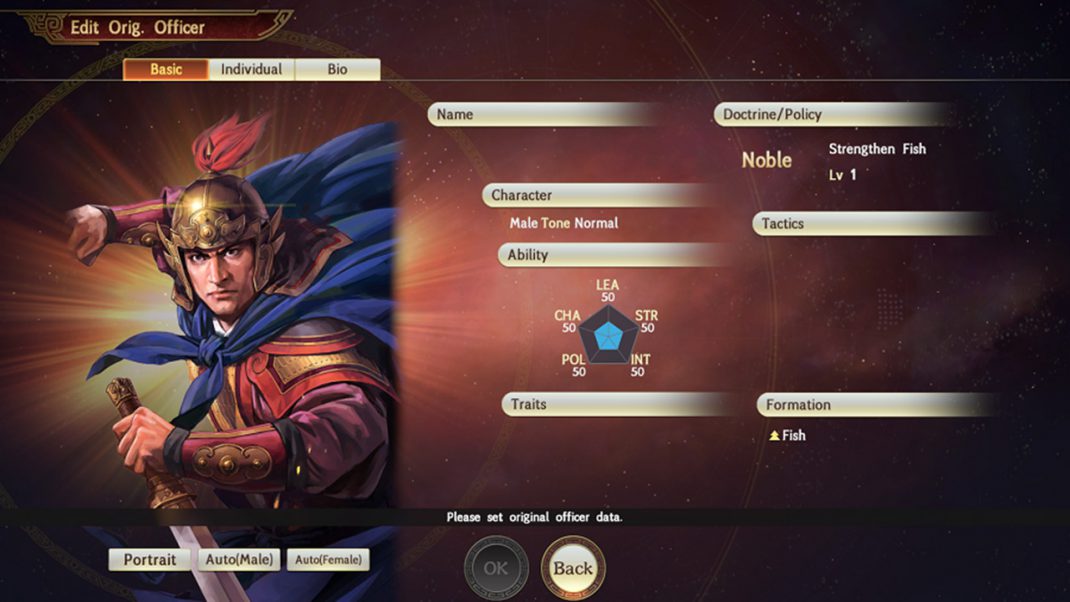 Create A Custom Officer in Romance of The Three Kingdoms XIV

Burlingame, Calif. – December 19, 2019 – Today, KOEI TECMO America and famed developer Kou Shibusawa introduced all-new gameplay elements to their greatly-anticipated strategy game, Romance of The Three Kingdoms XIV (RTK14), including the first information on officer creation, promotion, and search. The return of the iconic franchise is set to launch across the West on February 28, 2020 for the PlayStation®4 Computer Entertainment System and digitally on Windows PC via Steam®.

Over 1,000 officers are featured in RTK14, each with their own traits and characteristics to help crush opposing armies and outwit enemies. But if following the likes of Liu Bei or Guan Yu isn’t what you’re looking for, gamers will also be able to freely create new officers from scratch. Creation tools include everything from the officer’s name to their abilities and face. Additionally, specific settings such as the officer’s politics, character traits, tactics, and favorite formations will also be customizable to help create the officer of your choice, whether it’s purely from imagination or the polygonal resurrection of some of history’s more famous military minds.

If creating officers isn’t your thing, gamers will also be able to search for officers with unique character traits, recruit them, then deploy them in battle. Take command of officers with character traits such as “Insightful” or “Recruiter” to scout other officers who may become helpful allies in your quest to control Ancient China. RTK14 requires a lot of specialized personnel in order to conquer the map, so searches and recruitment are vital conditions to advancing your army, especially when it comes to utilizing the officer’s set character traits. For example: Officers that possess traits such as “Duelist,” “Heroic,” or Vigorous” can execute duels on the battlefield, and during the automated duels, officers with the traits “Duelist” and “Vigorous” are given the upper hand.

When defeated in battle, the losing officer may be wounded, captured, or may even die, and the units of the losing side will have their morale severely lowered. When a unit’s morale reaches zero, it is annihilated, so the character traits Duelist, Heroic, and Vigorous become extremely powerful in battle. Other traits like “Divination” will help prevent disasters like plagues and locusts from attacking your base, while a trait like “Abundant Harvest” will help increase supply income. Meanwhile, some officers will also feature character traits such as “Reckless” and “Irritable” and while powerful, these officers will be difficult to control. To find ultimate success in RTK14, gamers will need to figure out how to effectively find or create the right officer for the right position.

As officers become more and more successful throughout the game and begin to take over cities, the imperial court will bestow a “Royal Rank.” The bestowed Royal Rank will provide various benefits such as increasing the number of commands that can be executed during diplomacy or being able to designate the timing to trigger optional tactics to the troops. When the Royal Rank is “Duke” or higher, attack targets can be set by province, and campaigns can be executed to district units across multiple bases. Regular marches require a single order for each unit, whereas campaigns can be executed thanks to a single order across all units, helping strategies unfold in a more dynamic and effortless fashion, establishing Royal Rank as key to officer and army success in the ultimate quest to take control over Ancient China.

Romance of The Three Kingdoms XIV is now available for pre-order. Those who purchase any version of the game within the first two weeks of launch will be able to download the additional scenario ‘Battle of Yiling’ for free.