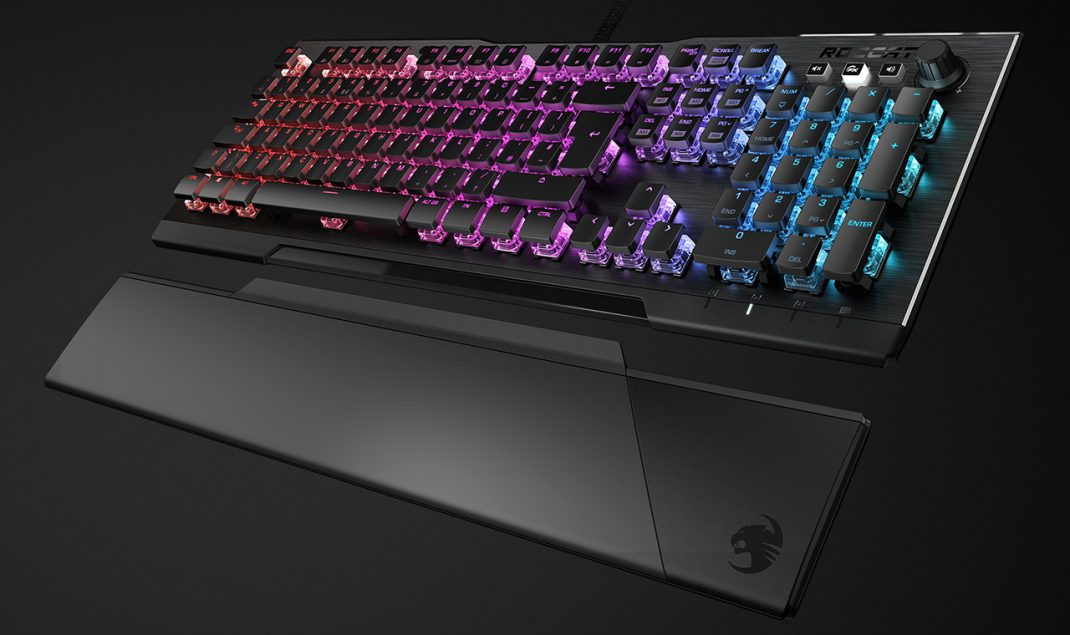 SAN DIEGO, Sept. 24, 2019 — ROCCAT, Turtle Beach’s (Nasdaq: HEAR) Hamburg, Germany-based PC division today announced two new versions of its acclaimed Vulcan series mechanical PC gaming keyboard are now available for PC enthusiasts looking to up their keyboard game. The Vulcan 121 AIMO features a sleek Ash Black aluminum plate and debuts a new, speed-optimized version of ROCCAT’s proprietary Titan mechanical switches. Named Titan Switch Speed, these new switches register key strokes up to 30% faster than standard switches. Additionally, the Vulcan 122 AIMO is the new Arctic White version of the original award-winning Vulcan 120 AIMO – named Best Gaming Keyboard of 2019 by WIRED. Featuring an anodized aluminum plate and Titan Switch Tactile mechanical switches that register key strokes up to 20% faster than standard switches, while giving gamers a key stroke that is swift, precise, and tactile. Both the Vulcan 121 AIMO with Titan Switch Speed switches and Vulcan 122 AIMO are available now at participating retailers across Europe and Asia and will be available in the U.S. in October for a MSRP of $159.99.

“ROCCAT’s Vulcan series keyboards look and feel fantastic and give PC gamers an edge over the competition because they are faster, which is why we believe they are the best gaming keyboards available,” said Juergen Stark, CEO, Turtle Beach. “Since its debut the Vulcan has already become one of the top three best-selling gaming keyboards in Germany and a best-selling product in its price tier, and has received numerous awards, including the 2019 iF Design Award for its product category, as well as the latest ‘Best Gaming Keyboard’ accolade from WIRED.”

René Korte, General Manager of PC Products at Turtle Beach added, “We introduced the original Vulcan 120 AIMO at Computex 2018, and the immediate praise it earned from attendees and reviewers alike was a powerful testament to the great product it is. Our Vulcan series keyboards are sleek, precise, and beautiful gaming tools designed to give you an edge over the competition. Adding the new, even faster Vulcan 121 AIMO and Vulcan 122 AIMO variants was the answer to what fans have been asking for, and now they have more options to find the right Vulcan to fit their style.”

Following the success of the Titan Switch Tactile introduced with the original Vulcan 120 AIMO, ROCCAT now offers a new, even faster option with the Vulcan 121 AIMO. Built for speed, the Titan Switch Speed boasts a shortened 1.4mm actuation point (3.6mm travel distance), which helps it react over 30% faster than standard switches, pushing the boundaries of speed without sacrificing precision. The switches are actuated with a hefty 45g of force to minimize accidental key presses, making the keyboard perfect for gaming. Additionally, completing its current Ash Black and Artic White theme, ROCCAT’s Vulcan 122 AIMO is the Arctic White version of the award-winning Vulcan 120 AIMO. Like its predecessor, the Vulcan 122 AIMO features ROCCAT’s own Titan Switch Tactile mechanical switches with an actuation point of 1.8mm for a total travel distance of 3.6mm. It is well balanced between crispness and speed – 20% faster than standard – and is silent, yet with a noticeable bump.

The Vulcan 121 AIMO and Vulcan 122 AIMO also feature a magnetic detachable palm rest and low-profile design for improved ergonomics, making them suitable for long periods of game time, and serve as the best platform for ROCCAT’s unique AIMO lighting engine. Each Vulcan keyboard switch features an individually configurable, long-life LED capable of displaying 16.8M colors in a variety of special effects, and its functionality grows based on the number of AIMO-enabled connected devices. The AIMO lighting reacts organically based on usage, presenting state-of-the-art illumination scenarios without the need for configuration.