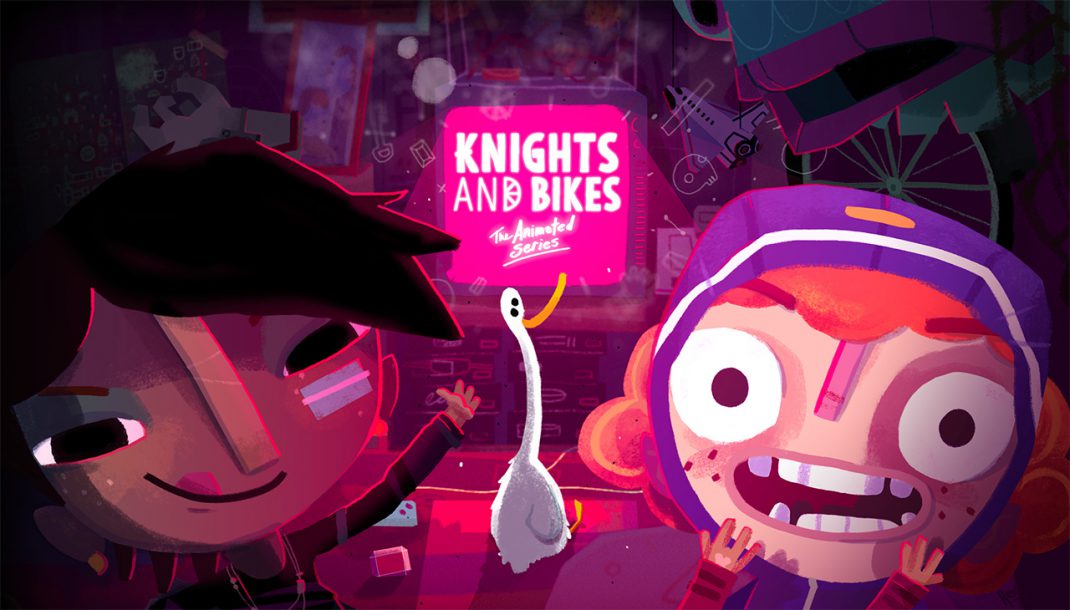 A hand-painted action adventure, set on an island with a heart-warming friendship at its core. Demelza is dragged out of her everyday life by her new best friend Nessa, on a quest to find legendary treasures and solve ancient mysteries. The duo ride their bikes, solving puzzles, causing accidental mayhem and generally having the best holiday-adventure possible. They’re accompanied with Frizbees, water-balloons, their trusty bikes and their loyal pet goose Captain Honkers. In a story where freedom, friendship, collaboration and ingenuity are at its heart. The game has been rated by PEGI for players 7 years old and higher.

Rex Crowle, co-creator: “The energy, humour and joy that continually bursts out of TV animation was a large inspiration in creating Knights And Bikes, not just in the way it looks, but also in the themes and tone of the game. It’s a fantastically fun new development for us to be working with Tiger Aspect on a Knights And Bikes animated series, and taking things full-circle. In fact I wonder what future games this series will inspire?!”

Tom Beattie, Head of Kids and Family at Tiger Aspect Productions: “Having been a huge fan of Rex and Moo’s previous games, it’s a no brainer for us to develop the world of Knights and Bikes as an animated series.  With a funky female duo at its heart, a stunning world to explore and two brilliant books from Knights Of – we’re thrilled to be part of the adventure”.

Inclusive children’s publisher Knights Of published the spin-off books by Gabrielle Kent with more books planned in the series. David Stevens, publisher, commented that he is “excited that the brilliant world Rex and Moo created, and Gabrielle has expanded, will be bouncing off the page with the brilliant team at Tiger Aspect.”