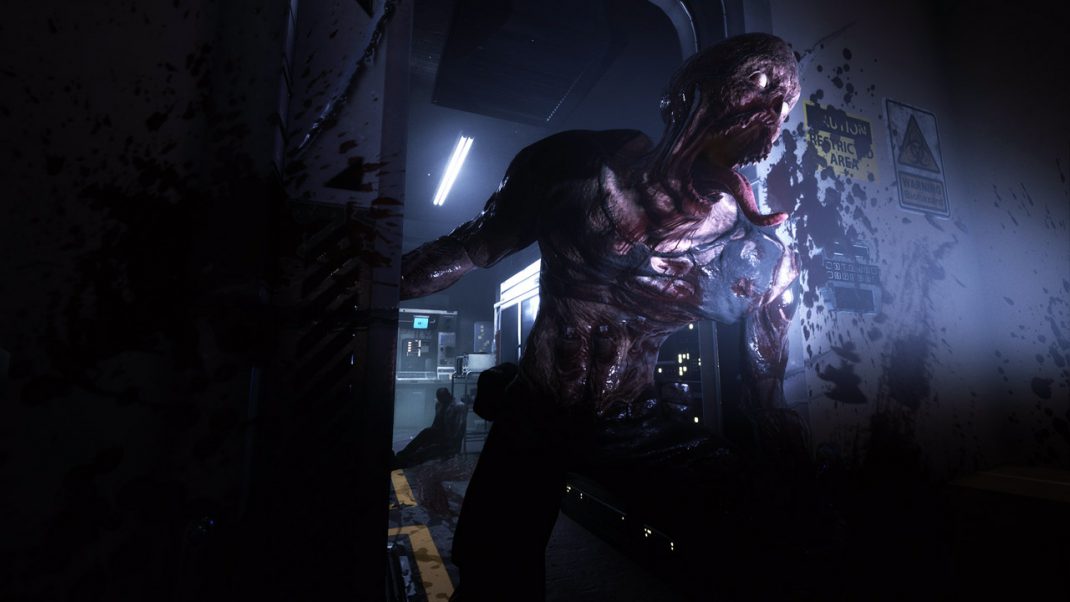 While this is a review of Daymare: 1998, one must explain how this game came into being… One of my favorite games of the 90’s is Resident Evil.  I knew absolutely nothing about the game when I bought it in 1996, it just sounded like a good game to get into.  Aside from bad dialogue writing (“master of unlocking”?) and the horrible static camera, Resident Evil was a huge hit on the original Playstation, setting the foundation for a series of sequels, spin offs, and remakes.  Lately, Capcom has been remaking their original games, with Resident Evil 2 just being released early this year.  Prior to Capcom developing this remake, Invader Studios was developing a fan-made remake of Resident Evil 2 that was canceled.  Instead of trashing their game engine, Invader Studios created their own homage to the Resident Evil franchise, called Daymare: 1998.

Daymare: 1998 is set in Keen Sight, Idaho in the year 1998 (it was the year that Resident Evil 2 was released).  You begin the game as Liev, a member of H.A.D.E.S. which stands for Hexacore Advanced Division for Extraction and Research, en route to a research and development center that has encountered a viral outbreak.  Within moments of entering the facility, we quickly realize that Liev is not a nice guy and that H.A.D.E.S. are not there to rescue any survivors, but to quickly recover the canisters and any data relating to this virus.  The facility is in shambles, and the virus has turned some of the survivors into zombies.  As you proceed with your mission, you encounter more information as to what was going on at this facility,  but continue to complete the mission objectives as ordered.  As the team extracts the containers from the facility, there is an altercation, which causes the helicopter and the containers to crash into a small town near by.  This damages the containers and floods the town with the same virus that infected the facility, turning the residents into zombies as well.  This is where we are introduced to our second playable character, Samuel. 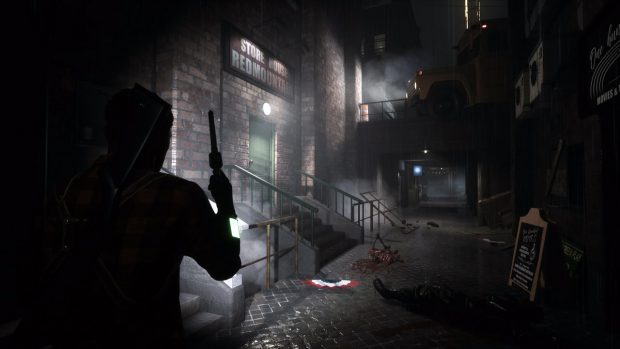 In Daymare: 1998 you will be playing as 3 characters; Liev, Samuel, and Raven.  Each character will play the same, but will have different story elements that are driving their motivation.  For instance, Liev is driven by duty to H.A.D.E.S., while Samuel is driven by revenge and is influenced by hallucinations.  Each character offers different viewpoints of the same events, like it did in Resident Evil 2, and will give you the whole picture once you have played through the entire game.  Unlike Resident Evil 2, however, is that you must play through each characters campaigns, so this will lessen the amount of replayability that Resident Evil 2 had right out of the package.

The story for Daymare: 1998 is right out of Capcom during the 1990s, down to the cheesy dialogue as well.  I’m not sure if Invader Studios expertly crafted the cheesy dialogue to make Daymare: 1998 feel like a Resident Evil game, or if it was just bad writing and it feels right due to the focus of the game.  In either case, this feels like it’s a Resident Evil storyline, which means it’s just as confusing in parts as it is tense.  Expect a faithful recreation of a 90’s Capcom story and you will not be dissapointed.

The game play for Daymare: 1998 feels very modern, while the rest of the game feels like it was made in the 1990s (more on that later).  Daymare: 1998  is a third person game, so the camera will hover just off of whatever shoulder you feel comfortable with.  I played Daymare: 1998 with only a mouse and keyboard (didn’t want to dig out the controller) and the controls felt very responsive and tight even without a controller.  Your character and walk, jog, and run, with running draining a stamina bar that is only used for running.  Bringing out a weapon puts the reticle on the screen, and by holding the right button you can aim the weapon, focusing the reticle to be smaller and more accurate. 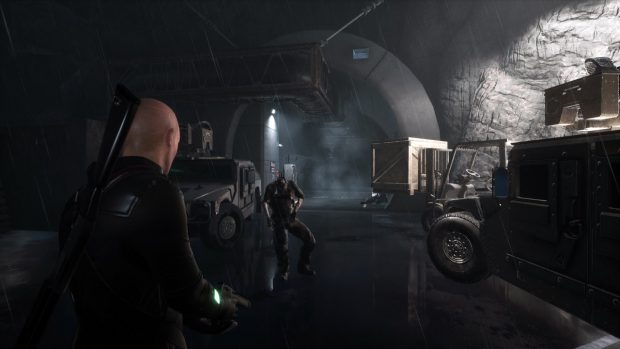 Each character will have a wrist computer that will serve as the games HUD.  This computer will show you your health status and inventory, as well as objectives.  Your inventory is very limited, and you will need to manually reload your spent magazines to keep your weapon full.  This really matters!  You can reload your gun one of two ways; quick reload and long reload.  A quick reload will swap out a spent magazine for a full one, but will drop the spent magazine on the floor.  A long reload will do the same thing, but the spent magazine will go into your inventory.  You begin the game with only the one magazine in your weapon, so managing this will be vital.  Ammo is not plentiful and so you will need to watch your shots and decide when to run.

There are a few puzzles in the game, this wouldn’t be a Resident Evil style game without them.  However, Invader Studios made many of the puzzles feel more like something a person would run into in the real world, instead of what we saw in the old Resident Evil games.  The first puzzle you come across is dividing the current energy available for the facility into the rooms that are needed to open a door, while the second one has to do with raising and lowering temperature gauges to open a cryo pod.  They require some brain power to work through them, but they do make sense.  Then there was the Greek password puzzle for the director’s office.  Yeah, good luck with that one, that one sucked.

The game play for Daymare: 1998 is the true gem here.  While the game feels like a 90’s homage to video games, it does not play like it.  Gone is the horrible camera, you will see exactly what is eating you.  The first mini boss was a good example of how tight the controls are, even on a mouse and keyboard.  You need to kite the boss around, quickly turn and get a few shots off before running again.  I was able to do this without feeling like I was getting stuck on anything, or that I was fighting the controls the entire time.  Daymare: 1998 should feel like a 90’s game, but shouldn’t play like one.

Annnnnnd here’s where Daymare: 1998 begins to fall flat for me.  There are certain aspects of the aesthetics for Daymare: 1998 that look and sound just fine, but where Daymare: 1998 falls flat, it hits hard.  Let’s take the visuals first.  The environments looks great.  The atmosphere is proper creepy, and the lighting does a great job of hinting but not showing.  There was some lower quality graphics when you start off in the forest with Samuel, but I felt that the facility and the town looked great. The ambient sound and sound effects also were done very well.  The zombies made enough noise to be creepy and certain sound effect cues did the job of startling the player.  But the bad ended up being, well, bad. 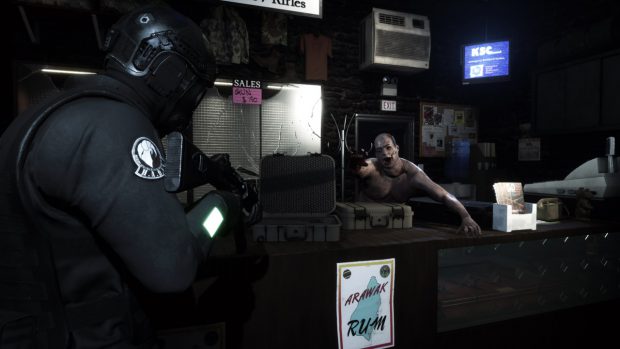 The character models are down right ugly.  I’m not sure if they are supposed to be stylized or not, but there was just something about the humans in this game that I found even more creepy then the monsters and zombies.  I think it had to do with the way the eyes were rendered.  They seem to be too far apart and don’t blink enough.  It’s not a deal breaker, but it was something that I did notice.  I also mentioned before about the bad dialogue, well the actors give that dialogue the treatment that it deserves.  Everyone in the game delivers their lines with the same flat, disinteresting tone of voice.  Again, not sure if this was on purpose to fit the original feel of Resident Evil 2 or if it was what just came out due to the actors that were hired, but it was noticeable.  Again, not a deal breaker, but it will either make you feel like you are playing a 90’s Capcom game, or you will be playing with the sound off and subtitles on.

Daymare: 1998 is a fun, good game.  It delivers on the promise of giving the player that Capcom 1998 experience, but with the modern game play so you won’t want to toss your computer out of a window.  Where Daymare: 1998 falls flat, it’s hard to tell if this was a purposeful design decision to mimic that 1998 experience, or if the developers actually fell short of their goal.  The game play is fun and very tight feeling, the environments are mostly well done, but the voice acting, dialogue, and character models all fall short compared to other games out today (or perfectly replicate that 1998 feeling, depending on what you are comparing them to).  Overall, I absolutely recommend this game to anyone that is a fan of the original Resident Evil games, but not if you are a fan of the newer games.  Daymare: 1998 is all about nostalgia, and you need to have that desire or experience of playing a Capcom game in the 90’s to get the most out of Daymare: 1998.  Daymare: 1998 will be available through Steam on September 17th.  As of this writing, I could not locate the final price for Daymare: 1998.

Price not available at time of writing 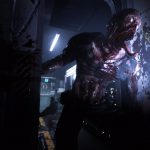