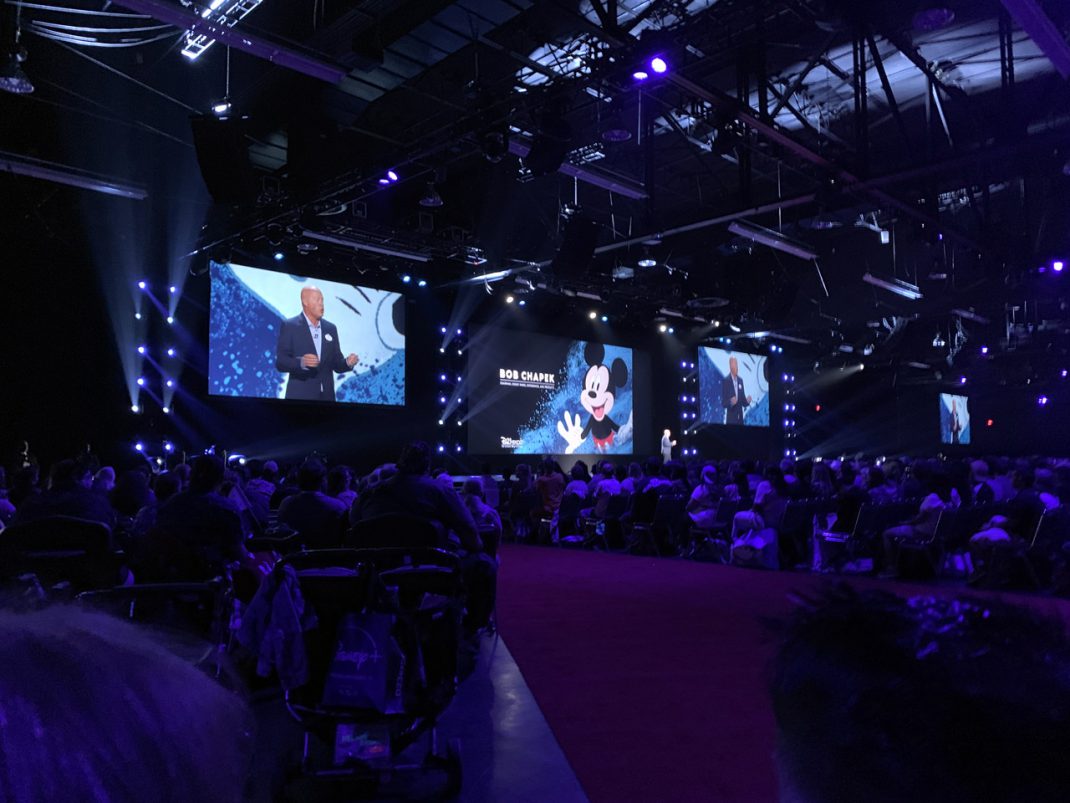 ANAHEIM, Calif. (Aug. 25, 2019) – Today at D23 Expo 2019, Disney Parks, Experiences and Products Chairman Bob Chapek unveiled details on how Disney is bringing the next generation of immersive storytelling to life.

Chapek welcomed thousands of fans as he shared more about the ambitious plans in store for one of the most extraordinary periods of expansion in Disney history. From Star Wars: Galactic Starcruiser and the timeless transformation of Epcot at Walt Disney World Resort, to the Avengers Campus coming to both Disneyland Resort and Disneyland Paris, to the Disney Wish arriving on the high seas in January 2022, there are more ways than ever for guests to be front and center in their favorite stories.

“It was Walt’s vision for our theme parks to be places where Disney stories come to life in amazing ways, and with the world’s most creative and talented team of artists and dreamers, there’s no shortage of inspiration,” Chapek said.

The audience was amazed as Disney Legend Dick Van Dyke joined Chapek onstage for a sweeping performance of “Step in Time” to announce the first Mary Poppins attraction at a Disney park, coming to Epcot. Live music continued to swell in the auditorium as award-winning composer Pinar Toprak performed her new anthem for Epcot on piano. Noted singer Jordan Fisher also surprised guests with a sneak peek of the musical score for Disneyland’s new parade.

The morning was full of exciting announcements on plans for Disney parks, resorts, cruise ships and beyond:

Super Heroes Assembling Around the World

Guests can suit up alongside their favorite Super Heroes at the Avengers Campus, beginning in 2020 at Disney California Adventure park and later at Disneyland Paris. Both campuses will feature the first Disney ride-through attraction to feature Spider-Man. The attraction will give guests a taste of what it’s like to have actual super powers as they sling webs to help Spider-Man collect Spider-Bots that have run amok.

As Super Heroes continue to assemble at both campuses, one of the iconic buildings in California will be the Avengers Headquarters. The building will become the future entrance to a brand-new E-Ticket attraction where guests will fly alongside the Avengers in an epic adventure to Wakanda and beyond when it opens in the next phase of development.

Avengers Campus will feature Pym Test Kitchen where Pym Technologies is using the latest innovations to grow and shrink food.

Guests will also find heroic encounters throughout the campus, including Ant-Man and The Wasp, Doctor Strange, the Guardians of the Galaxy, Super Heroes from Wakanda and Asgard, and Iron Man. Guests may even catch a glimpse of the Avengers along the rooftops of the Avengers Headquarters.

At Disneyland Paris, guests can extend their adventures at Disney’s Hotel New York – The Art of Marvel, opening next summer. The hotel will celebrate 80 years of Marvel art and artists, with more than 300 stunning pieces on display. Rooms will include one-of-a-kind themed suites featuring favorite Super Heroes like Spider-Man, and guests can even meet these legends in a dedicated space. 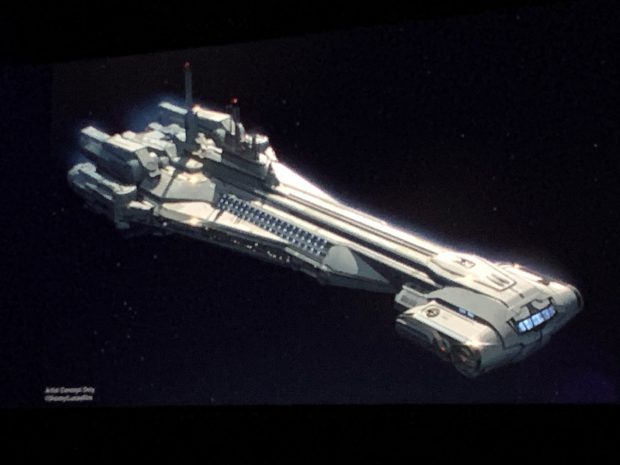 A Star Wars Voyage Unlike Any Other

Guests are eagerly awaiting the immersive Star Wars vacation experience coming to Walt Disney World Resort. Star Wars: Galactic Starcruiser will be a glamorous ship – the Halcyon – where every window features stellar views into space. Guests will embark together on a two-night adventure that includes special activities, incredible dining, and a “spaceport” day on Batuu at Star Wars: Galaxy’s Edge, inviting guests even deeper into their own Star Wars stories.

Disney Cruise Line Magic On and Off the Ships

With three new ships coming to the Disney Cruise Line fleet, there’s so much to look forward to on the high seas. Today, Chapek announced the first of the three ships – the Disney Wish – will be delivered in late 2021 and will set sail in January 2022. Reflecting the theme of the vessel, Rapunzel will grace the stern, representing her character’s wish to see the world. D23 Expo attendees also got a first look at the ship’s three-story atrium, inspired by the beauty of an enchanted fairytale.

Guests can also look forward to a signature island experience that celebrates nature and the spirit and culture of The Bahamas at a new Disney port of call located on the breathtaking island of Eleuthera at a place called Lighthouse Point.

Chapek shared more of the ways Epcot will stay true to its original vision while bringing timeless Disney storytelling to life with the magic of possibility. The park will be unified with four neighborhoods that each celebrate a unique aspect of what makes Epcot so special: 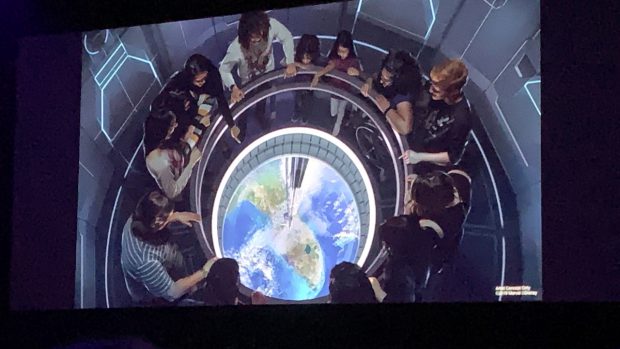 Anniversaries are serious fun at Disney parks – and the 50th Anniversary of Walt Disney World Resort will be one of the biggest ever. For the first time, the celebration will extend beyond Magic Kingdom to each of the resort’s four theme parks with highly anticipated attraction openings and new entertainment, food and beverage, merchandise, and more.

Planned to debut in late 2020, Disney Genie is a revolutionary new digital offering that will enhance the way guests plan for and experience a trip to Walt Disney World Resort. Disney Genie will make planning easier and more fun by providing guests customized itineraries geared to princesses, thrill seekers, foodies, families and more. Guests will even be able to tell Disney Genie what they want to experience, and it will quickly evaluate millions of options to present them with an optimal day.

Next Generation of Animated Stories at Disney Parks

Set to debut in spring 2020, the new Magic Happens parade will come to life with an energetic musical score and a new song produced in partnership with singer-songwriter Todrick Hall. Celebrating awe-inspiring moments of magic that are at the heart of so many Disney stories, the parade will feature stunning floats, beautiful costumes, and beloved Disney characters from “Moana,” “Coco,” “Sleeping Beauty,” and more – all led by Mickey Mouse and his pals.

Attendees got a first look inside Mickey & Minnie’s Runaway Railway, coming to Disney’s Hollywood Studios at Walt Disney World Resort in 2020 and Disneyland in 2022. Chapek also revealed a first look at the new area of Mickey’s Toontown at Disneyland that will be home to this exciting attraction, which will take guests on a journey inside the wacky and unpredictable world of Disney Channel’s Emmy® Award-winning “Mickey Mouse” cartoon shorts.

D23 Expo fans heard more details about the “Zootopia”-themed land coming to Shanghai Disney Resort. In addition to a major new attraction that blends storytelling and state-of-the-art technology to bring this favorite film to life, guests can expect immersive entertainment, merchandise, and dining options that can only be found in this mammalian metropolis. 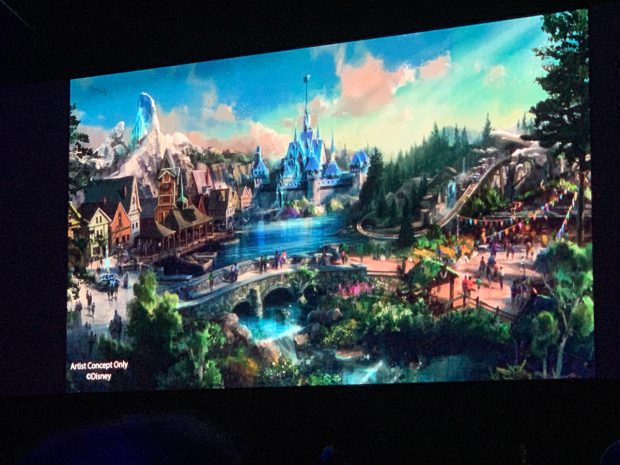 Hong Kong Disneyland will celebrate some of the greatest animated stories of all time when the park’s castle transforms into the Castle of Magical Dreams. Drawing inspiration from 13 beloved Disney stories featuring princesses and heroines, the castle will feature adornments like Snow White’s apple, Cinderella’s coach, and Belle’s rose. The castle will be a canvas for new entertainment, including a daytime show and nighttime spectacular, and will be home to a new Bibbidi Bobbidi Boutique where children can receive royal transformations.

As part of the multi-year transformation of the park, guests will be able to visit the world of Frozen, complete with all its sights, sounds, cuisine, and traditions. The area will feature two incredible attractions – a new coaster called Wandering Oaken’s Sliding Sleighs that takes guests on a winding journey through the kingdom, and Frozen Ever After, inspired by the incredibly popular family attraction in Epcot’s Norway pavilion at Walt Disney World Resort. Also, for the first time (in forever), guests will experience the full force of Elsa’s powers as she creates a beautiful “winter-in-summer” day.

A first-of-its-kind show will celebrate the magic of Walt Disney Animation Studios in a touching story brought to life by Cirque du Soleil, Walt Disney Imagineering, and legendary Disney animators. It will combine Disney storytelling and heart with Cirque du Soleil’s signature artistry. Previews will begin March 20, 2020, leading up to the world premiere on April 17.

Bringing Magic into the Daily Lives of Families and Fans

The audience was the first to hear how Target and Disney will come together with a creative retail collaboration that encompasses experiential retail and merchandising – including the launch of 25 Disney stores within select Target stores nationwide on Oct. 4, with 40 additional locations opening by October 2020. The “shop-in-shop” will feature an enhanced Disney assortment of more than 450 items, including more than 100 products that were previously only available at Disney retail locations.

With so many exceptional experiences set for Disney, the best is yet to come.