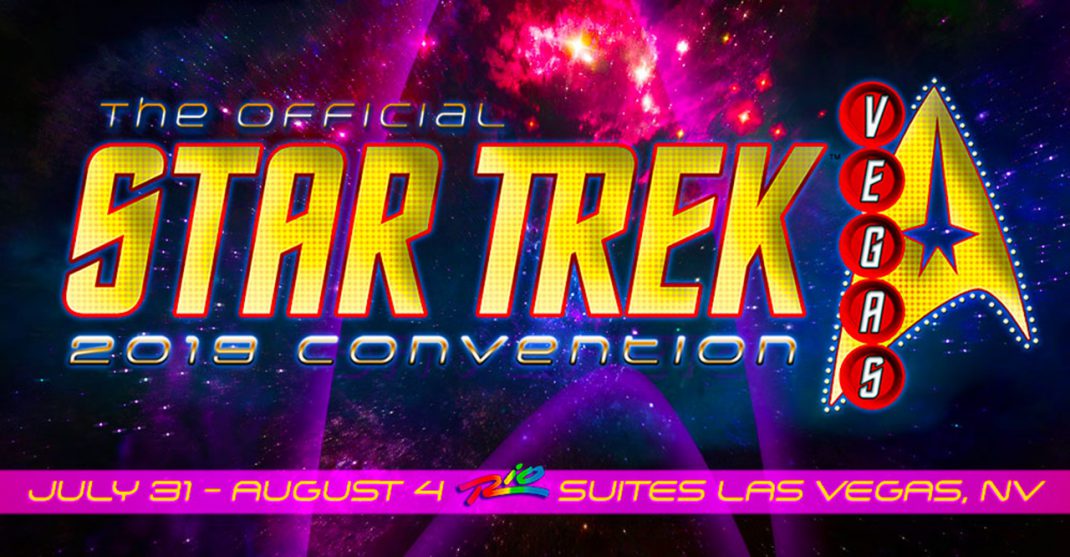 The Official Star Trek Convention is almost here and tickets are still available! Check out the full details below – personally, we’re most excited for the celebrity appearances and the Rodenberry VR Nexus!

(Las Vegas, NV. . . July 20, 2019) Star Trek fans from around the world will be beamed to Las Vegas on July 31 – August 4 for the galaxy’s largest annual Official Star Trek Convention. Organizers anticipate that over 15,000 attendees will convene at this decade-long Las Vegas tradition at The Rio Suites Hotel.

This Official Star Trek Convention will be highlighted by special presentations including:

In addition to celebrities, the non-stop theatrical show will include behind-the-scenes presentations, costume and trivia contests, no-minimum bid auctions of unique collectibles and one-of-a-kind items, and special fan-made music videos.

Along with nighttime Star Trek themed parties, the Star Trek Saturday Evening Gala Celebration will return, starring Star Trek: The Next Generation’s Brent Spiner and his live band, performing a selection of unforgettable songs.  This concert will take place Saturday, August 3 at 9:30 p.m. (a separate ticket of $60 is required for general admission).

Want to get married in Las Vegas, Star Trek style?  Now you can say “I do” on the Original Series Bridge or The Next Generation’s 10 Forward replicas.  Wedding packages start at $1000 (include ceremony and photo session at location) and can accommodate up to 50 guests.

For cosplayers, Saturday is the day!  The Costume Competition with celebrity judges, special on-stage costume panels, the annual Costume Parade throughout the convention, and a number of cosplayer meet ups are all scheduled. Garak’s Tailor and Repair will be returning to handle any emergency costume repairs for free throughout the weekend.

Attendees can walk down the “Creation Promenade” and purchase photos in front of maximum-sized backdrops including The Original Series Transporter Pad and the Agonizer Booth from Star Trek: Discovery. They can also take photos and selfies in front of The Borg Regeneration Chambers.

Located just off the Promenade, the Jean-Luc Picard: The First Duty exhibition will showcase original props, costumes and other artifacts tracing Picard’s life and Starfleet career. Items on display include his cherished Ressikan flute, the legendary Picard family album, his Starfleet uniforms, models of the ships Picard captained and all that remains of the “Borg Queen.” The gallery will also feature exclusive first looks at costumes and other items featured in Star Trek: Picard.

Attendees will want to take a tour through the Roddenberry archive, in VR Nexus, courtesy of Sansar, as well as sign up to attend virtual meet and greets with Star Trek celebrities during the convention in the Tropical Room.

Want to shop, the exhibit hall will boast companies and distributors selling and displaying Star Trek and sci-fi collectibles from across the nebula.

For further information, call Creation Entertainment, 818/409-0960, or visit our website at www.creationent.com.

Become a part of the community, and follow the convention online  –