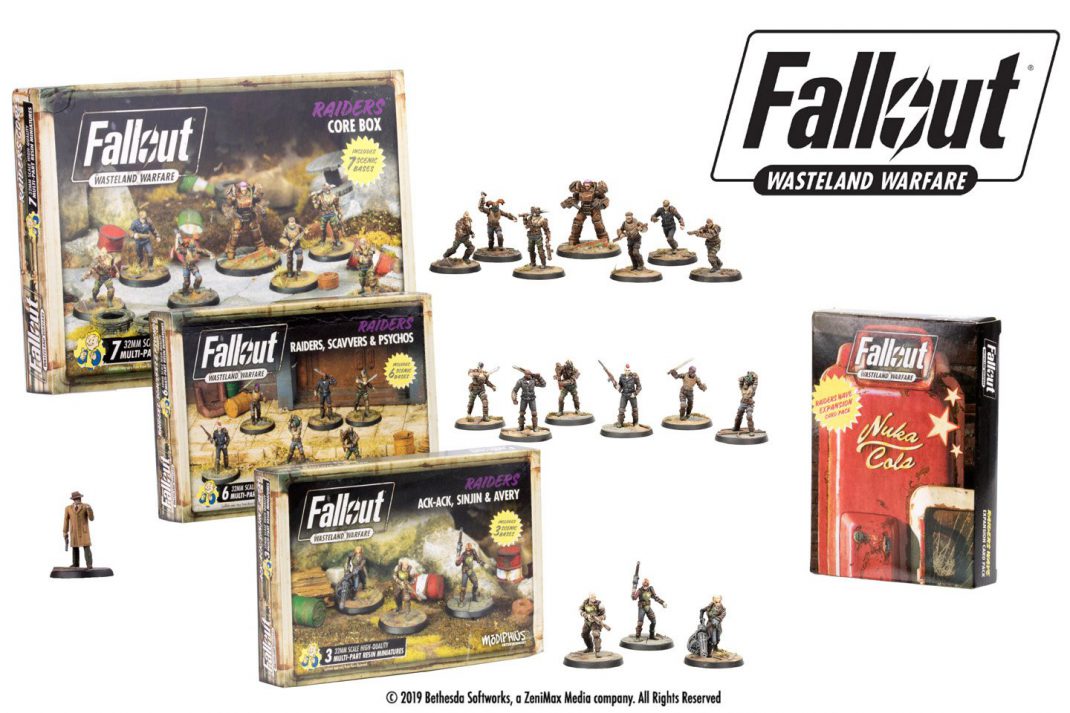 Modiphius is delighted to announce the release of our brand new Raiders Bundle, a collection of three awesome resin miniature sets which brings the Raiders faction onto the tabletop for use in Fallout: Wasteland Warfare. These are in stock and ready to ship!

Here are the details on this very special bundle which is part of our Fallout: Wasteland Warfare Collection. Be Sure to check all the new details on our Fallout Blog where James, Jon and Adam, provide background, insight and commentary into this fascinating new faction!


Raiders Core Set
Ruthless and aggressive, gangs of Raiders can be found across the Wasteland scavenging and stealing to survive. Led by the strongest and most cunning among them, Veteran Raiders have often managed to piece together rusting suits of scrap Power Armour. Comprises:
Raiders, Scavvers and Psychos
Raiders bring are mix of cheap and somewhat disposable troops armed with basic scrap ranged weapons and blades. Chem-crazed Psychos race to close with the enemy and tear them apart in melee, or else send their foes reeling with grenades. Meanwhile, the savvy Scavvers hang back and pick off chosen targets with accurate rifle fire. Comprises
Ack-Ack, Sinjin and Avery
Some of these gangs are led by iconic villains such Sinjin and his right hand woman Avery who bring high ranged ability unique buffs to support their followers and make good leader choices for any game. Ack-Ack and her gang set up base in the Olivia Satellite Station. Known for her raids on local farms and settlements, which are always punctuated by the rapid fire of her favourite Minigun.Comprises

Who is this mysterious trenchcoated figure who always appears out of nowhere and seemingly at exactly the right time? None can say, but their help is always a boon in the Wasteland’s savage environment.

This promo figure is only available for a limited period as part of the bundle, and will not be available in retail until Wave 3 (the Institute).

Wave 2 arrives with a new faction in the Raiders, as well as new profiles for Creatures and Robots to allow players to further increase their forces. Joining them are the Mysterious Stranger and notable equipment like the X01 armour suit and the Gauss Rifle.

You can also expect a pile of downloads including updated Force Lists for the Brotherhood of Steel, Super Mutants, Survivors, Item & Unit Costs, Wave 2 Scenarios plus Leader, Mod, Perk, Power Armor, Reference, Unit and Weapon cards files for those of you who want to get testing out the faction before your order arrives.

We hope you enjoy this latest addition to our Fallout: Wasteland Warfare collection, the individual mini sets which comprise this collection are currently expected to launch in your local retailers and our webstore from August 9th.