Conan Unconquered is a real time strategy survival game that its creators Funcom and Petroglyph compare to games like They are Billions. On the subject of Conan Unconquered’s creators, there are few you would trust more to work on a Conan-inspired RTS than the crew that brought us Command And Conquer and Star Wars: Empire At War. The question still remains though: does it live up to the legacy of the studios behind it?

Conan Unconquered is a real time strategy/city builder that can be played different ways like you would in StarCraft or StarCraft 2 where you can make a bunch of cheap fighters to zerg across the map. Or, you might try building up a strong defense to repel invaders. Or, perhaps you would go the research route for better technology and unit abilities? The choice is yours.

The real way it stands out more than just a “Command and Conquer” on steroids is in the brutality of the attacking enemy waves. You can look up to a UI element and see what is coming and they let you know what kind of critters and troops targeting you next. Did I say critters? Yes I did and, by Crom, they are perfect for Conan Unconquered. They are great in choice of type but also the great visuals that bring them to life. Conan Unconquered displays its carnage in eye-catching form. 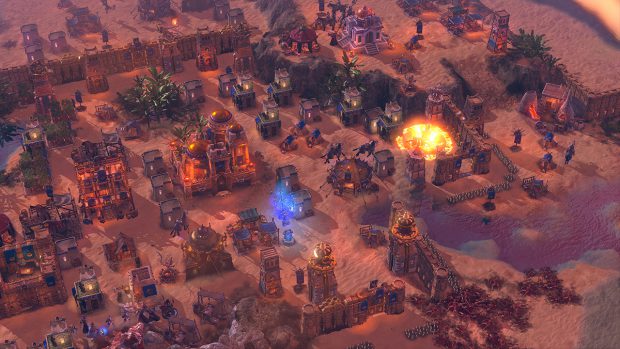 Of course, the best graphics won’t do anyone any good if the gameplay suffers. Thankfully, I found the game’s AI opponents to be solid and challenging and the cities that open up as your progress have challenging maps laden with the fog of war. When you start, you have only one hero to choose from (unless you get the Deluxe Edition) but as you progress up through the towns you unlock things like more heroes who have their own play styles. My favorite unlock of the game is the comic book game mode. It’s laid out like a virtual comic book so that with each city you open you also open another chapter of the comic. I’ll admit I got frustrated with one city partly because I wanted to get past it to the comic. It’s well written and I hope the DLC slated for it has more chapters of the comic too.

Though the game is a real time strategy it has a built-in pause feature that allows you to hit the space bar once and set up multiple commands to take effect as soon as the time starts again. This is extremely helpful and makes an easy option between the hardcore player and the more casual, if you want more of a true real time challenge just don’t hit the space bar and it will be true real time. If you want an easier to manage game then use the space bar as well as make sure you choose the easy to hard game setting of your choice.

Conan Unconquered has online co-op play as well so you can get together with a friend and play in a match where you share a town and resources and divide the tasks by your choice. The game is still getting it’s name out there and is still in pretty heavy updates so there aren’t many games hosted by someone else so that you can join in but if you start a match there’s a good chance someone will join in though really your best bet is talking a buddy into playing too. 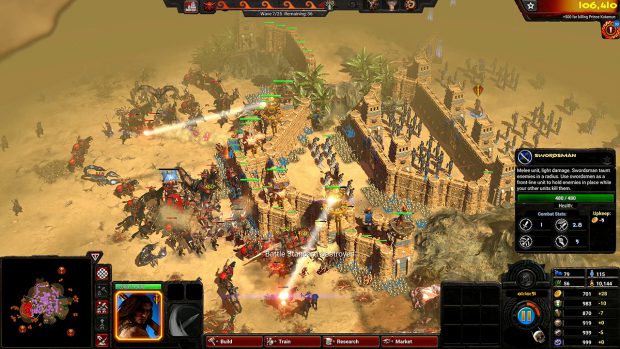 While playing Conan you can complete feats such as killing a certain number of spear men and most of the them carry over between matches. So let’s say you almost kill the number of spear men you need for the achievement/feat in your first match but you lose. You still get credit for your score and for the number of kills you got. So the next time you play it continues the count from the previous match as well as adding to your overall player score which leads to more unlocks such as Veteran status or if you are playing it through Steam you get Conan Unconquered trading cards. This really helps take away the sting of not surviving a city.

Not surviving the city, unless you are a ranked professional player you will probably find yourself doing this plenty, especially when you are first getting going. Much like They Are Billions, Conan Unconquered is not very forgiving of tactical mistakes. Enemies come in massive swarming waves that pour over your defenses looking for something to exploit and the AI is good at it. There were a few times where I got caught up in building and researching only to have missed that one of the wall sections hadn’t gotten fully repaired and the enemy has breached it or some similar style mistake. You are always tight on funds, the levels never give you the chance to do whatever you really want on them because it’s all about surviving waves not creating well fortified highly developed and researched massive army comprised of the highest ranked units possible. You just do the surviving and a little bit of offense during map clearing, how much of which is also up to you. The game by design also has time limits in it, the waves come at a predetermined time from a predetermined direction(s), when the last wave is stopped the level is over.

If your Hero dies he respawns after a certain amount of time so at least it doesn’t end the level. However the respawn time can be really brutal if your defense hinges on him being around. If I had attacks coming from three directions I might have my defenses built heavily on two sides with a support defense built on the third side with my Hero intercepting the attackers. As you play through a level your Hero levels up as well and when they get to a certain point it unlocks their Hero Talent for the match, it’s usually an AOE to help you take out a section of a wave. This timer on the special attack ends when your hero respawns so if you realize you hero is gonna be a goner then use the attack quickly, as soon as they are back you have it again. Your Hero only levels during the match so don’t be surprised when it starts at level one on the next map. 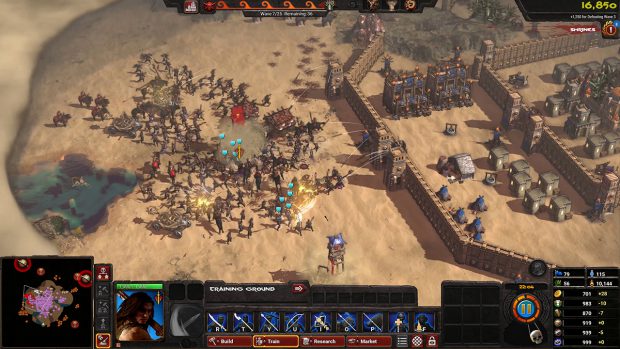 My biggest concern in the game was the save system and it kept me concerned and paranoid the whole time I played. When I first started playing it seemed forever between saves so the only way to save your game was to “quit and save”. Right before you go into a rough wave the game now autosaves so if you are paying attention you will notice the autosave when it happens which is kinda a nice reminder that the enemy is at the gates, or walls or towers, whatever your play style. The game would be even better with a save function that can be used or not used by player’s choice or for completing challenges. I wouldn’t have minded speed control in the game either but that really effects the “real time” in a Real Time Strategy game so when it comes to that it really feels like developer’s choice. I think it would be interesting to make it so that you can do all the saves you want… up to a certain wave. So when wave 12 of 15 hits make it so that there are only autosaves by the game (or even not that) from that point on.

Conan Unconquered is a great game, one of the best RTS games I’ve played in recent memory. It’s not for everyone, you need to be a bit hardcore (and/or very patient) and fine with restarting levels but it can be quickly addictive. The icing on the cake has to be the well done virtual comic that accompanies it. Plus I can talk barbaric while walking around the house without looking too loony. Maybe I’ll even shed a tear because “He is Conan, The Cimmerian, he won’t cry. So, I cry for him.” 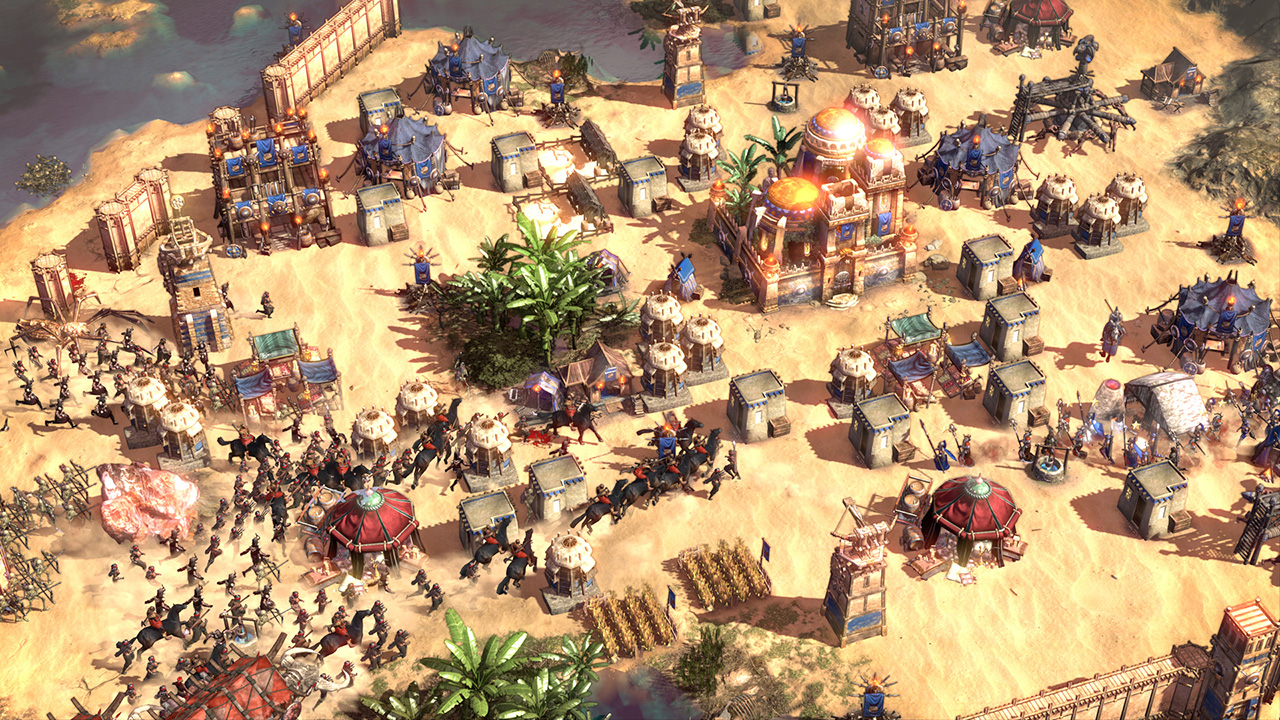