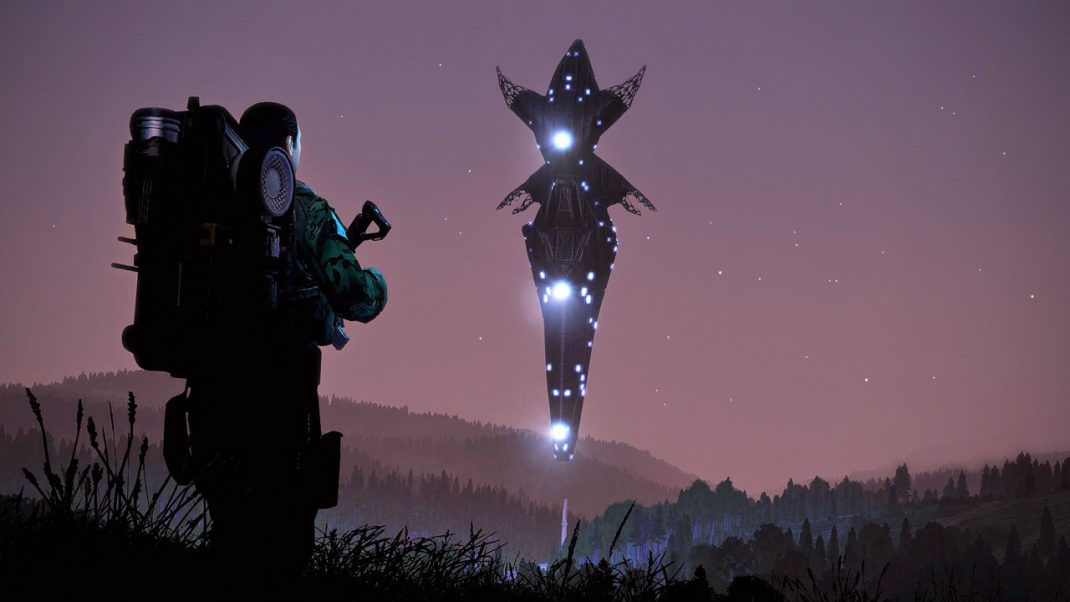 May 23, 2019 – Bohemia Interactive is excited to present: Arma 3 Contact – a spin-off expansion for their military simulation game Arma 3 (watch trailer). Scheduled for release on Steam (Windows PC) on July 25, the Arma 3 Contact expansion features a military science fiction singleplayer campaign, which will arrive together with a fresh new sandbox terrain, factions, weapons, vehicles, gear, and more.

In the “First Contact” singleplayer campaign, players will assume the role of NATO drone operator Aiden Rudwell, who is deployed to Eastern Europe as part of a military training exercise. When a massive alien vessel suddenly enters the atmosphere, you are sent to investigate the extraterrestrial visitors and determine their intentions. However, amid the tension and chaos, armed conflict inevitably unfolds. Over the course of the campaign, players will engage in field science, electronic warfare, and combat reconnaissance, in an experience delivered in authentic Arma style.

Although conventional infantry engagements can be expected, a significant portion of the campaign will focus on non-shooting gameplay. This involves operating a mini UGV sampling laser and CBRN defense equipment to study strange alien anomalies, as well as controlling the electromagnetic spectrum with the aptly named Spectrum Device. This advanced modern tool – depending on what antenna is fitted – can be used for navigation, intelligence gathering, and deception.

Besides its story-driven campaign, the upcoming Contact expansion also brings various additions to the greater Arma 3 sandbox. One highlight is the massive new 163 km2 terrain set in the fictional Polish-speaking country of Livonia. With this new locale come two smaller yet capable fighting forces: Livonian Defense Force and Russian Spetsnaz. These new factions are equipped with their own combat fatigues, vests, and helmets. Furthermore, the expansion packs 5 additional weapons, 2 new vehicles plus variants, extra gear, and more.

“Many of us have wondered if humanity is alone in the universe. I, for one, want to believe we are not. The premise of intelligent life visiting Earth from outer space has fascinated me since childhood, and combining that with the military authenticity of Arma 3 always seemed like it would make for a very cool and unique experience”, said Arma 3 Contact Project Lead, Joris-Jan van ‘t Land. “After our team’s previous project – Laws of War DLC – proved that players enjoy gameplay that’s a little different, our team felt motivated to go for it. I am personally very grateful for the opportunity to explore this theme, and I want to thank all Arma 3 players for their support and making it possible for this dream to come true.”

The Arma 3 Contact expansion is scheduled for release on July 25 and will be distributed as DLC for Arma 3 on Steam. It is already available for pre-purchase on Steam and the Bohemia Store for 24.99 EUR / 27.99 USD / 21.99 GBP (with a temporary 10% discount up until one week after release). Those who pre-order will also receive Sneak Preview Access to the new Livonia terrain as of today.

People who are entirely new to Arma 3 can also decide to pick up the Arma 3 Contact Edition on Steam or the Bohemia Store, which bundles the Arma 3 base game and Contact expansion at a much lower price than when both are bought separately. Fans might be interested in the Bohemia Store-exclusive Arma 3 Contact Collector’s Edition (available here). This limited-edition also includes the base game (Deluxe Edition) and Contact expansion, plus more than five unique collector’s items such as a rugged field case, topographic map, two-way radio transceivers, tin foil hats, and more.

For more information about Arma 3 Contact, visit www.arma3.com/contact. Here you will also find the system requirements for Arma 3 and answers to some of the most Frequently Asked Questions about the new expansion. To keep track of all the latest news, also be sure to follow Arma 3 on Facebook, Twitter, YouTube, and Steam.