CHICAGO, IL – February 5, 2019  — Stern Pinball, Inc., a global lifestyle brand based on the iconic and outrageously fun modern American game of pinball, today announced the location of the 2018/2019 Stern Pro Circuit Championship.  Partnering with eBay, the International Flipper Pinball Association (IFPA), and the Replay Foundation, the Stern Pro Circuit Championship is the premiere competitive pinball event of the year. 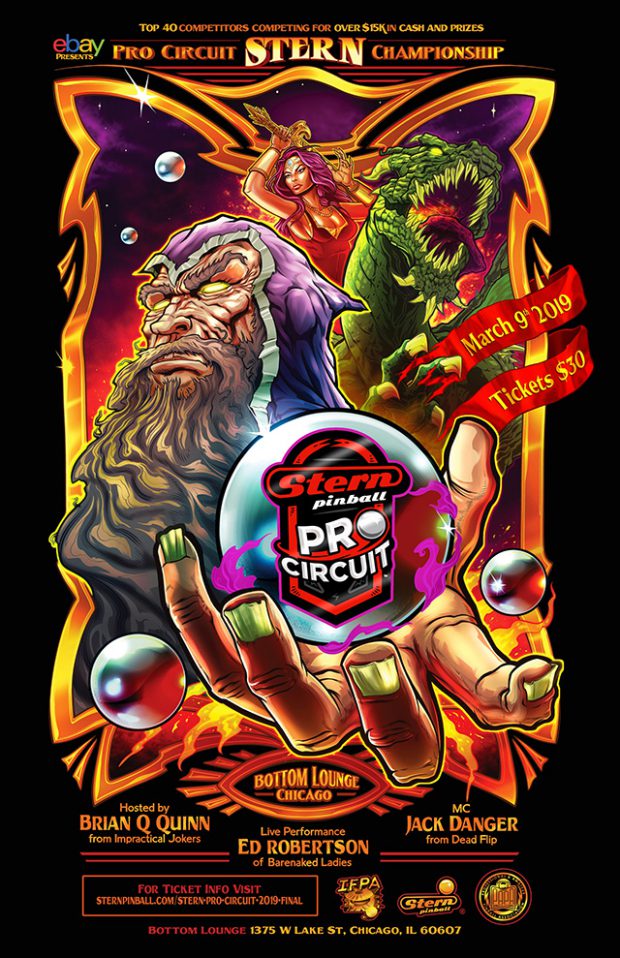 This year’s Championship will feature the 40 highest ranked pinball players in the world competing for the coveted Stern Pro Circuit Championship Belt at the Bottom Lounge in Chicago, Illinois on Saturday, March 9, 2019.

Tickets are $30 for the general public and can be purchased through this link: https://www.ticketweb.com/event/stern–pro–circuit–championship–bottom–lounge–tickets/9157335  Doors open to the public at 5:00 pm.

The tournament will be an elimination format where the last person standing will be crowned the champion.  Machines used in the tournament will be a mix of classic and new Stern Pinball titles.  When only two players remain, they will compete in an exciting head-to-head match-up to determine the 2018/2019 Stern Pro Circuit Champion.  For additional information about the 2018/2019 Stern Pro Circuit Championship please visit: https://www.sternpinball.com/stern–procircuit–2019–final

The Stern Pro Circuit is comprised of 20 sanctioned tournaments around the globe held during the course of a 12-month season.  The 40 highest ranked players at the end of the season compete in the championship.  Individual players compete for cash, prizes, a new Stern Pinball machine, and designation as the Champion of the Stern Pro Circuit.

“We’ll have the best players on the planet competing for the championship belt and great additional entertainment from Q, Ed and Jack Danger,” said Gary Stern, Chairman and CEO of Stern Pinball. “This is going to be a really fun event.”