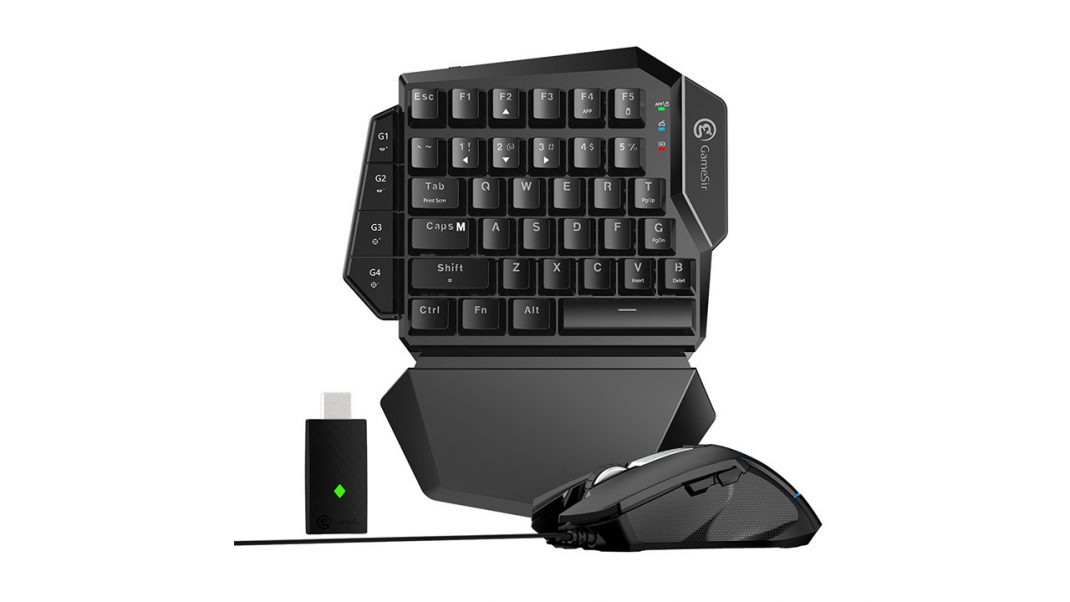 The Gamesir VX AimSwitch is a wireless half keyboard with a programmable mouse and the VX Dongle for the optional connection and in case the device doesn’t have Bluetooth. It is pretty much plug n’ play on the console, with the XBox One you plug the mouse into the half keyboard then plug the dongle into the system. These are pretty much the directions for all consoles. It can vary a little bit on the next step which is to plug into a controller and then have the controller turned off. This will bring up a screen asking you to reconnect the controller but the AimSwitch then just takes control, you can make moves with the keyboard and mouse that are super accurate. If you are playing a game with on the fly moves that allow for aim-assist that would probably help with quick shots but otherwise the fun is in having the mouse shooting accuracy.

Xbox One Titles That Support Keyboards (At the time of this posting):

A big point in the GameSir VX AimSwitch’s favor is that no matter how I am connected to the console/system I didn’t see a latency difference between the keyboard and mouse when it came to wireless or wired. That is a huge deal because bad latency is a peripheral and game killer. As long as you don’t need to type sentences, you really don’t miss that other side of the keyboard either. You may want to go back to the controller when you aren’t in a game playing since the system menus are definitely designed for controller navigating. Once you get used to it though you may not find yourself wanting to switch off it. 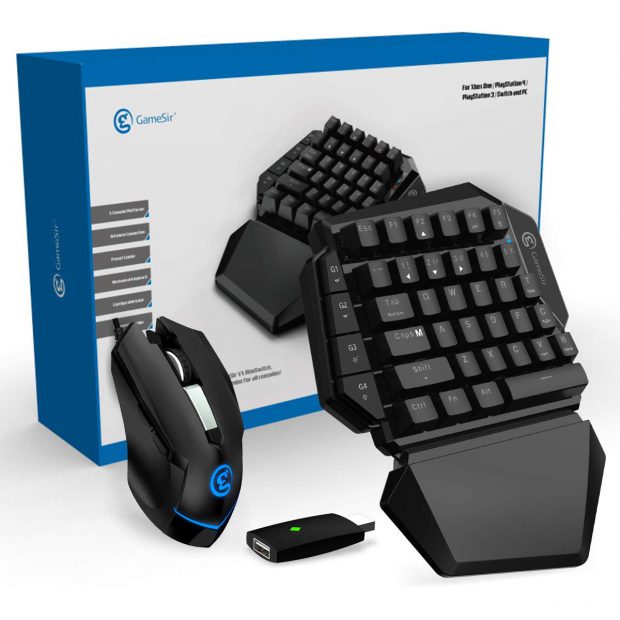 The biggest problem with wireless running is needing to charge periodically, when you are deep in a game and start measuring playtime in days rather than hours it might be a bit of a pain if after hours on the keyboard you had to switch off to a controller that you are not used to at the moment. This could result in you needing to plug into the system and hoping you have a long enough cord to sit in the comfortable position you had to get into during the marathon game session. A trick I like to do is keep a USB battery nearby (other batteries are available), then I plug into it and get a charge faster than plugging into a console and they tend to hold such a great charge that I can play hours with it tethered next to keyboard. I still get the wireless experience without the drawback then.

I really like how they decided to attach the wrist rest, it has a ratcheting side-to-side movement. That way it won’t become unattached if you are playing on your legs or something and it customizes to where you would normally have your hand on a mouse pad (a lot of folks let their left hand drift more to the right to accommodate hitting middle keys, especially small hands). It seems like a simple touch but I am typing on a really nice quality keyboard right now and the wrist rest slides sometimes even with a magnetic connection. Some people’s left hand also drifts because their right might be working a numbers keypad for moving. I try to stick with my keyboard for all uses so I don’t tend to miss the number pad. The keys are mechanical so you get that nice solid feel and click you have come to expect with mechanical keys.

I found the GameSir VX AimSwitch stands out great for 3rd person shooters, FPS, and RTS games. It almost seems like they were the initial target which makes sense with battle royale games like Fortnite being so big and games like Minecraft showing they have legs. X-Morph Defense is a solid tower defense game and its map coverage is immense resulting in dizzying fast moves with precision stops which I have always found is more doable on a keyboard. It works with the Nintendo Switch even, which I have a hard time with because I have huge, sausage-like fingers and big hands. When I think of it, Halo Wars sound pretty good – guess I know what I am playing next.

They even have their own app called G-Crux so you can set keys via your cell phone! You can have presets that you load when you are about to play one game and a different setup for when you play another. This too helps you customize it for the game types mentioned above. You can also update the GameSir VX AimSwitch’s firmware via your phone’s Bluetooth connection.

The only concerns I know of is that it takes some getting used to where the action buttons are, the ones that change weapons, fire weapons, etc. when it comes it console play. Another concern, which I hope will prove to be invalid but you never know, this may be considered a benefit to game play accuracy which might become a banning situation in some online games eventually. The AimSwitch is that impressive on the console once you get used to the keys, especially with all the key mapping and binding you can do. Also both the keyboard and the mouse have extra buttons that are just dedicated programmables.

The Gamesir VX AimSwitch wireless half keyboard and mouse combo is great for folks who like the play of a keyboard but want to get the most out of their console’s play.  It works well RTS, FPS, and 3rd person shooters and anything you may want a keyboard and mouse, when you think about it that is a pretty large number. It has a great Plug N’ Play setup and works great both wired and wireless on some pretty big games out right now. With it’s extra programmable buttons along with the standard half keyboard setup you can make your gameplay even smoother and more accurate. The Gamesir VX AimSwitch may just be the video game snipers best friend. 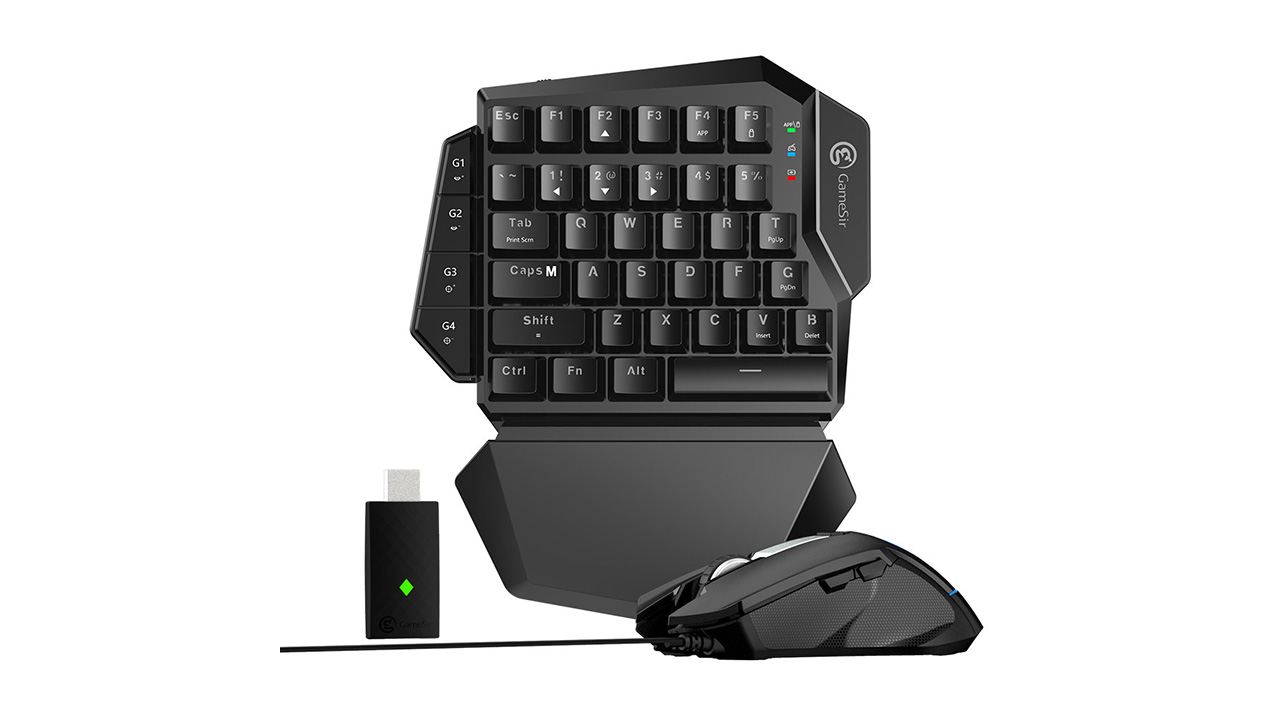