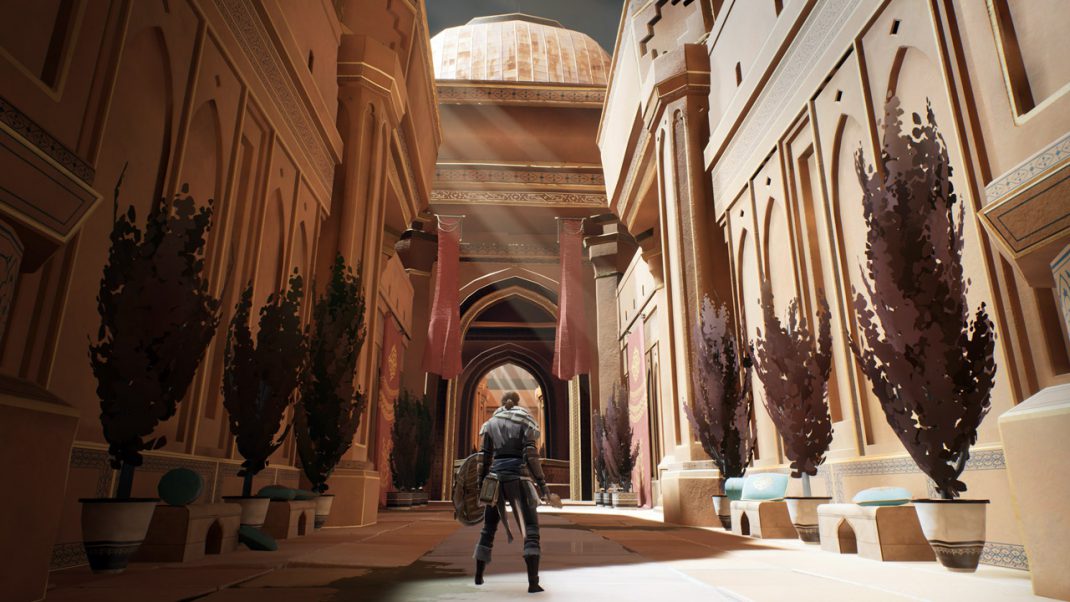 Ashen – A Review (Xbox One)

Developed by New Zealand studio A44 and published by Annapurna Interactive, Ashen is the latest action role-playing game to try to step into the ring with Dark Souls.  Many games have been compared to Dark Souls in the past, and have come up short.  Does Ashen have what it takes to survive the comparison and establish its own identify?  Or will Ashen end up forgotten in a few months?  Let’s take a closer look.

The story begins with you, a nameless and faceless character, listening to how your world began.  This origin story tells of how your sunless world was created and the inhabitants of this world.  It also tells the story of how your world became sunless with the disappearance of the Ashen, a figure of god-like power and ability.  While you are listening to this story, there is a sudden explosion of light that shines over the land, allowing the people to see clearly for the first time in decades.  This light could be the rebirth of the Ashen, and could mean a new era of light in this sunless world.

Immediately, you set out to discover the source of this light with your first companion, Jokkel.  Just down the way from where you start, you set up your home base in Vagrant’s Rest, after clearing the area of bandits.  You see, not everyone is happy that light is coming back to the world and there are plenty out there that will try to stop you.  From your base, you begin to set out and gather more people that would like to see the Ashen return.  These individuals will head to Vagrant’s Rest when recruited and help you in any way that they can.

Ashen’s story does feel very Souls-like in the sense that you are tasked with bringing light back into a dark world.  However, the story in Ashen centers around community and how you are finding people to help you in your quest to help strengthen this community.  Dark Souls always felt like you were fighting a hopeless battle, that even if you succeeded you were only putting off the inevitable.  With Ashen, I always felt like there was hope.  Success meant that the world was going to be much better off.  The story is compelling, and draws you in every bit as much as Dark Souls does, but with a very notable shift in overall tone.

Ashen’s game play is very similar also to that of Dark Souls at first glance. Everything from the combat system, the unique bosses, the open world, and the inventory system can be compared to Dark Souls, but these systems also have their own brand of uniqueness stamped on them.  Yes, at first glance Ashen plays a lot like Dark Souls, but as you get deeper into Ashen’s mechanics, you start to see the differences and they are brilliant.

Let’s start by looking at the inventory system and combat, since this is what you will be doing a lot in Ashen.  You start the game off with a single handed club that will get you used to the combat system.  As you explore and kill enemies, more items and weapons will drop for you to compare and utilize.  Your character can equip a single handed weapon and a two handed weapon in her/his right hand while holding a shield and a lantern in her/his left hand.  You can switch between these two loadouts quickly by a simple button press.  You also have a quick access bar for items that can replenish your health and your stamina.

Combat in Ashen is stamina based.  This means that everything you do in combat will cost you stamina, and if you run out of stamina you have opened yourself up to a butt kicking.  Stamina management is a must-have skill in Ashen.  A few times I went in to hit an enemy and realized that I no longer had any stamina.  Unlike Dark Souls, you cannot increase your characters stats.  Everything is based on your current equipment and weapon loadout, which you can improve by visiting your townsfolk.

Another huge difference between Dark Souls and Ashen is how the multiplayer is done.  You can absolutely choose never to participate in Ashen’s multiplayer system if you wanted to.  Your companions are good enough to get you through the game without ever needing the help of another human being.  However, if you wanted to tackle the game with others, then Ashen can make that happen as well.  Other human players will join your game and take over one of your NPCs from town.  Similarly, if you join another person’s world, you will do the same.  There is no voice communication in Ashen, so everything must be done non-verbally.  This means you will need to stay close to your companion and really pay attention to their situation.

Ashen is a gorgeously designed game, both visually and auditorily.  From the beginning, Ashen looks different then anything else you will play this year.  The voice acting in Ashen is very well done as well.  The actors deliver their lines perfectly, and the narration fits the tone of the story.  Sound and music design both delivers the world of Ashen to you.

The visuals are cell-shaded, which is nice to see make a comeback without getting overused again.  It was also an interesting design decision to not put faces on anyone in the game.  At first that distracted me a little bit, but as the game progressed I found myself really loving the difference in aesthetic.  The world you explore is beautifully designed, and I cannot express how much I loved the light effects in the areas of darkness.  Being able to drop your lantern to continue a fight with a two-handed weapon was great, but seeing how the shadows and light played around the fight at hand was simply amazing.

Being a huge fan of the Dark Souls games, I was very interested in Ashen from the beginning, but that interest was always tainted with a small amount of worry that Ashen wouldn’t live up to the Dark Souls comparison.  Whether that comparison is deserved or not, games like Ashen will always have to face that when it comes to how gamers will see this game.

What I can say now is that Ashen not only compares well to Dark Souls, but establishes its own identity as a beautiful and tough action role playing game.  If you were interested in playing a Dark Souls game before but felt that the difficulty curve or tone of the game just didn’t sit well with you, then Ashen might be what you are looking for.  While Ashen is not as hard as Dark Souls is, it isn’t a cake walk either.  Multiplayer options can help with some of the harder parts, but I did find that the game’s A.I. was capable for most of the game.  The only negative I can come up with for Ashen is the lack of being able to control your A.I.’s inventory.  You may have to fight a tough boss battle with a companion that just does not have the right gear.

Ashen is a must own for anyone that is even remotely interested in Dark Souls.  Ashen is available now for the Xbox One.