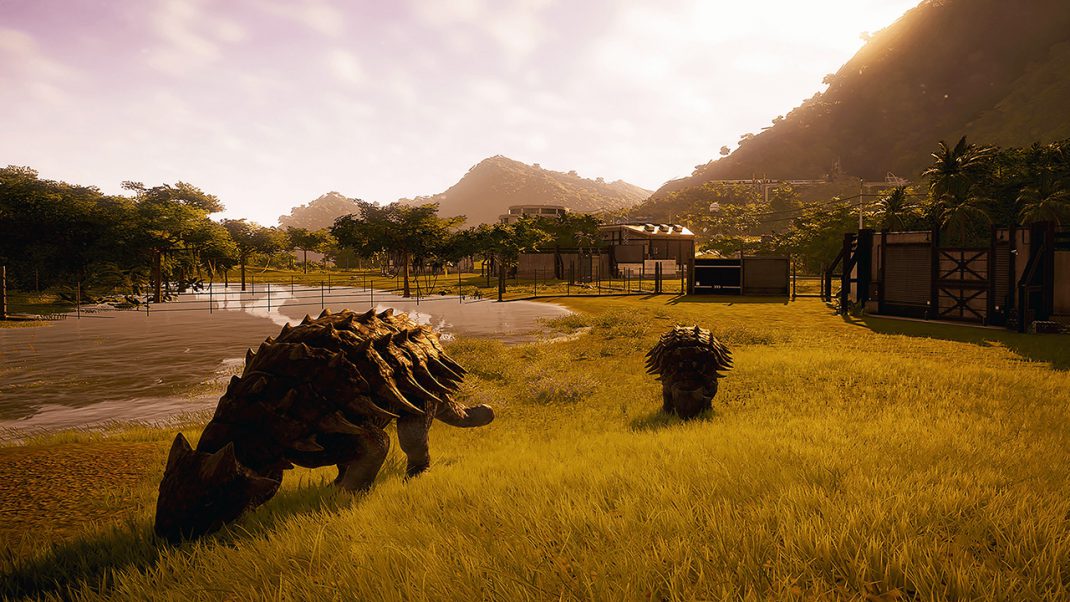 Jurassic World Evolution starts off wonderfully with the beautifully detailed island jungle underneath the helicopter as it heads toward the landing pad.  Then Ian Malcolm, voiced beautifully by Jeff Goldblum fills us in on what’s in store, reminding us that the island chain will be playing on is known as the “Five Deaths” and we don’t know how it earned it’s name in the first place but once the Jurassic team had shown up it lived up to the name thanks to lots of dinosaurs with big pointy teeth.  This means that this game is more than just a glorified zoo sim, there aren’t a whole lot of animals in a standard zoo that go out and kill people for fun.  Well, some do but not on the scale that the Jurassic critters do.  The voice acting is key to the game’s enjoyment and suspension of disbelief so it is nice that they got most of the cast from the movies to lend their voices to the characters.  The same can be pointed out as being key when they don’t have the actor’s voice in the case of Chris Pratt’s Owen where the person who did the voice work in his place was really bad, laughably so.  I think it almost would have been better to have someone else’s character or a fresh one to speak in place of Owen.  Luckily with the excellent voice work of all other characters and the beautiful scenery of the island it is easy to forget about Owen until they decide to use him again. 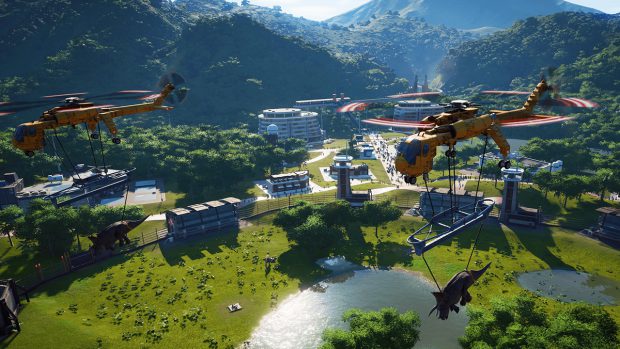 The gameplay is fairly similar to most city or zoo sims with maybe a bit more simplification. You don’t have to worry about trash cans and bathrooms but you do need to consider souvenirs and hotels as well as transportation once the park grows in size.  Starting off just about all of the contracts and objectives are designed to set up the basics of the park as well as to train you on how to use the menus which is good because the menus aren’t as intuitive as one might hope for, mainly because the game’s biggest weakness is some of the learning curves.  For example you can run powerlines over near a property and it will declare that there is no power going to it.  So you open up a menu that gives you a map that shows where the power is going to.  You then have to quit that map and go to the main view and make powerline adjustments.  You then have to go back into the menu to see how the coverage is until you get it just the way you want, then when you build new buildings you have to do it all over again.  Repetition results in a learning curve but when you just want to have fun making dinosaurs you definitely wished you could make corrections on the menu map.

At the beginning of the game there is a decent amount of start then wait for things to be done moments. However, don’t fret as, once the game gets going, you will find you are running around taking care of all kinds of things at once keeping you constantly occupied.  Enjoy the easy pace while you have it! 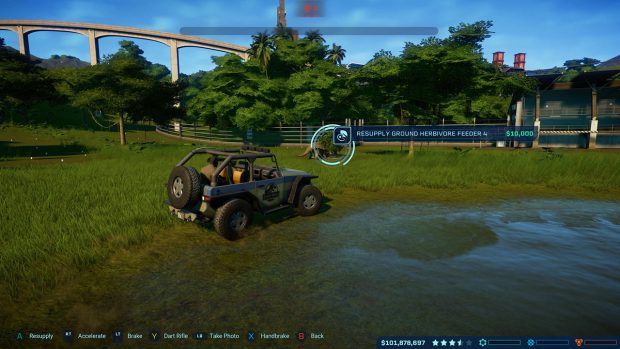 You need to think of the Hammond Research Center as being your command building.  If you want to build a t-shirt shop you need to research in the Hammond Building for example.  If you want to build dinosaurs that happens through the Creation Center but you need to send out dig teams from the Expedition Center to get fresh Dino DNA and the more and better quality of it you get the better the chance of the dinosaur surviving the birthing process.  All the starting buildings serve a purpose to get those dinosaurs hatching, after that most of what you do is developing a park while sending out regularly to get more Dino DNA, you definitely want to be careful when juggling buildings and building upgrades with funds to go on expeditions and creating new dinosaurs.

There are three main branches that give you contracts to fulfill and they are Science, Entertainment and Security.  Anytime you do a contract for one you lose popularity with the other two even if it should have been positive for them.  If the scientist asks you to build a new dinosaur that should make the Entertainment division happy but no matter what the other divisions are unhappy.  Also you might make a triceratops for one division and then the next division will ask you to make a triceratops and even if the first one fits all the criteria the game doesn’t recognize the step as already having happened.  You have to make it all over again to fulfill that contract.  Science won’t be happy even if that new dinosaur improves on the one you already have wandering around if the dinosaur is made for Security or Entertainment. 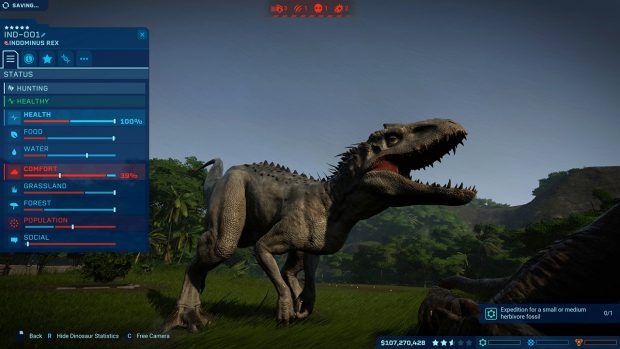 You can go into the dinosaur DNA and alter it using the DNA of other creatures to make them live longer, be more aggressive, to be able to eat a variety of foods and other such things.  You might add turtle DNA to make the brain power of the dinosaur to last longer.  Most of the DNA changes you make are to help the dinosaur’s health though some can alter the aggressiveness of them as well.  DNA manipulation can result in the dinosaur rating dropping and the dinosaur aspect of the park to drop as a whole so keep an eye on such things, it might even effect the percentage of chance that the hatching will provide a viable dinosaur (hint: it almost always gets changed).  So if you decide to try to make the dinosaur version of a platypus it won’t be very viable and actually you can only get so far in that direction.  The longer you play the more DNA juggling you can get away with as well as unlocking more dinosaurs.

If you picked up the Dinosaur Pack DLC as well then you will find yourself that much happier with Styracosaurus, Crichtonsaurus (one of my all time favorites), Majungasaurus, Archaeornithomimus, and Suchomimus being added to your ultimate dinosaur list.

When it comes down to it, everything I have mentioned as an issue is one that is easy to overcome with practice and let’s face it: most of us are playing it so we can make dinosaurs and see them be released into their enclosures and start running around it.  This game has behavior traits built into the dinosaurs as well as allowing you to make variations of them through their DNA resulting in watching the little dinosaurs start running around eating and drinking to the big dinosaurs that stand off against each other in great battles.  You can watch the dinosaurs from a couple of aerial maps or you can lock cameras onto a dinosaur to watch it from a ground point of view or you can order a helicopter or jeep in and watch the action from third person or man the camera and look at them first person from a distance and take “pictures” which are screenshots the game saves to your drop box.  Watch a meat eater trying to take a bite out of a triceratops is pretty exciting, especially if you have altered their DNA to make them behave or survive differently. 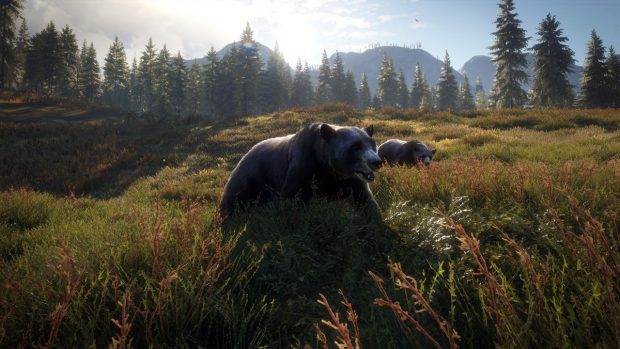 Jurassic Park Evolution has a learning curve to it but once you get past it there is a great and continuous excitement hatching and taking care of the dinosaurs.  True, you are supposed to concentrate on the fact that it is a theme park sim. To paraphrase Samuel L. Jackson, you have all the problems of a zoo and a major theme park, but don’t let that distract you from the joy of dinosaur-making and watching your creations come to life and run around behaving like we believe the dinosaur would in modern day.  When you get far enough in you can open sandbox play and get unlimited cash at which time you really can concentrate on dinosaurs.  Until then make t-shirts for the guests who survive the island to take home as souvenirs, if any survive that it. 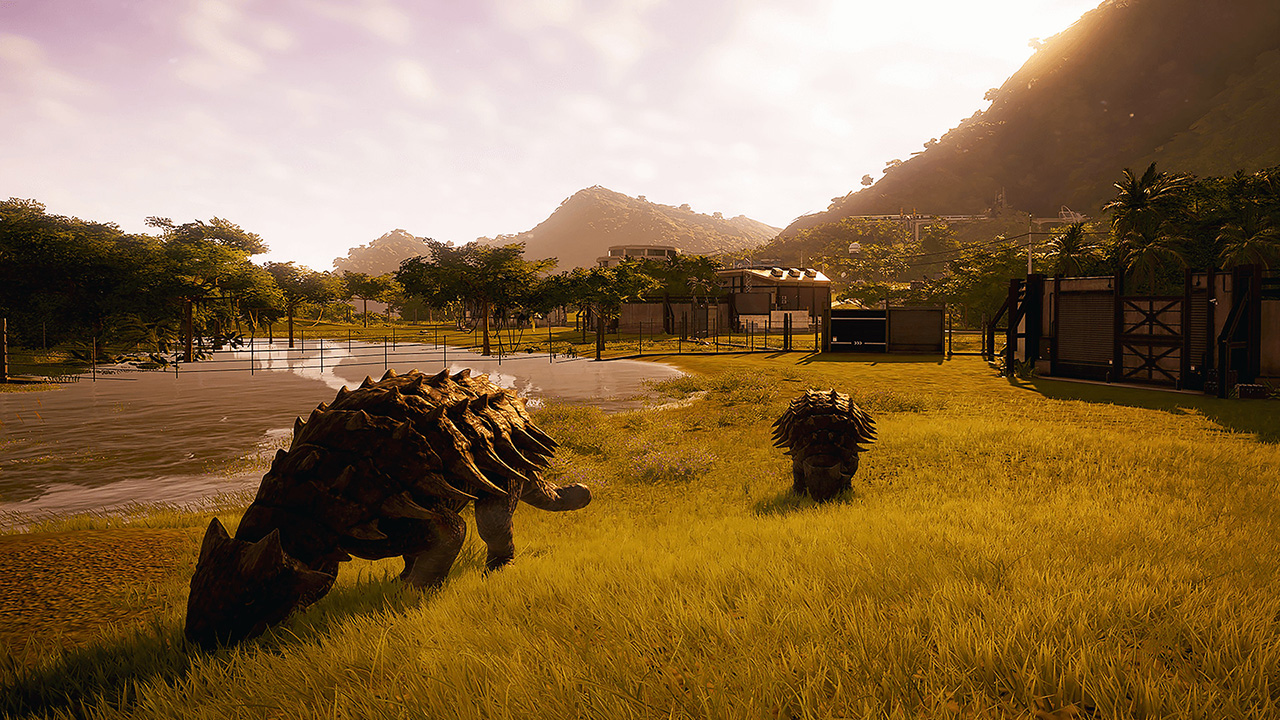