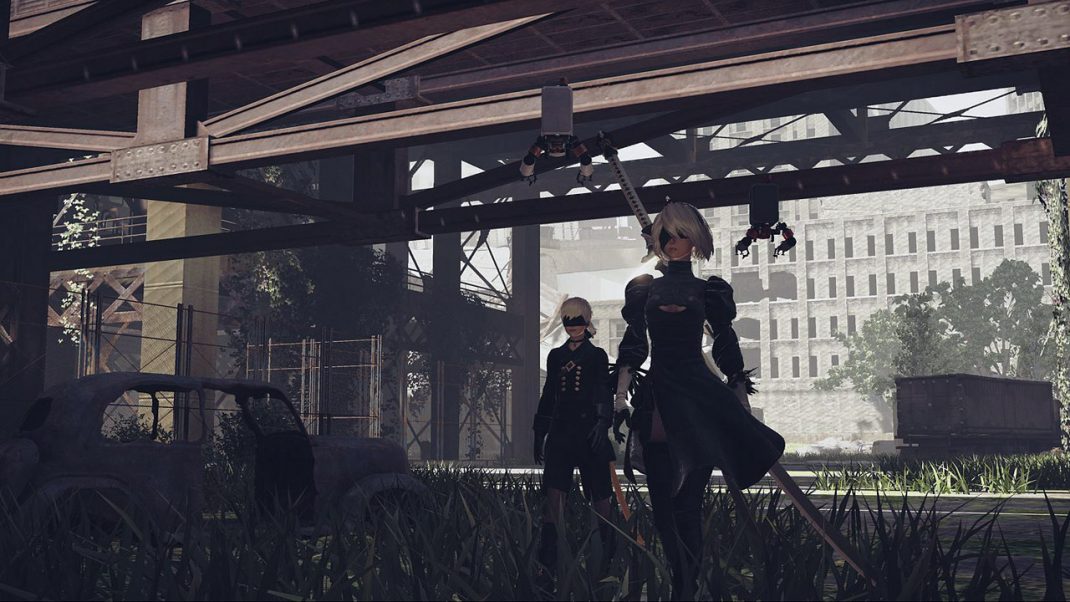 Nier: Automata Become As Gods Edition is one of those few games where I want to start a review saying you should get it.  Normally we wind through the review and somewhere near the end I will give you my verdict.  I will here too, don’t worry in case you were on the fence but, if you are into JRPGs and haven’t heard about this game, I think you should get it. Nier: Automata has a kinda crazy, beautiful story about Man being driven to the moon by his mechanical creations when they become sentient and take over the world in 119445 A.D.  Humanity sends down a small squad of sword-wielding warriors who are soon whittled down to two units, 2B and 9S.  This may seem like a spoiler but all this happens in the opening prelude to the game.

In no time you find yourself playing 3rd person behind 2B passing through a gorgeous but heavily industrial landscape fighting through a wide variety of robots.  The robotic playground that the Earth has become shows great strives forward in areas where machines might build other machines such in robot assembly rooms and mechanized arms. However, areas where humans would need to tread such as ladders and stairs have fallen to great neglect to the point of being broken away and impassible.  This is where the otherwise almost open world feel of the game (you can do a considerable job of backtracking if you think you have missed something) does show that it has a path that requires following but there are side paths and side missions that can be completely skipped and still get the player to the end.  These side paths often add side enemies too but that is kinda the point of the game for the most part. 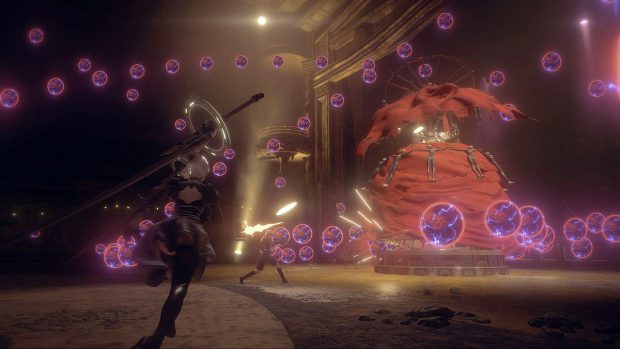 Techically 2B and 9S are robots too but they show traits of emotions; pride, embarrassment, concern beyond just mission parameters. It reminds me a lot of “Do Androids Dream Of Electric Sheep” (the main basis of the movie Blade Runner) and “There Will Come Soft Rains”.  Without giving anything away it brings up the question how close do androids need to get to their human counterparts before they might be considered alive – even to have a soul.  It is a deep question but one that the game offers up to you if you choose to think beyond hack and slash (not that there is anything wrong with that kind of play).  A lot of games that promise you multiple endings and make playing through again almost feel like a chore.  Nier: Automata Become As Gods Edition is one of those games where you are tempted to playthrough again anyway, new endings are just the bonus.

Whenever a game has side choices and missions the length of the game is harder to nail down.  If a player just likes to play fast and furious then they might complete the game in a few hours.  If a player instead likes to take their time, take in the visuals of the game and do side missions as they can be dug out of the scenery then the play is a lot longer.  Gameplay starts off top down fighter style, goes to 3rd person, goes side scrolling and even goes top down dungeon style so that the game makes sure you won’t get bored with your view anytime soon.  This is one of the first things I noticed and it is done so smoothly it is easy to not take much note of, it doesn’t feel like it is being done for the sake of doing it but rather doing it because that fits the message at the moment.  It doesn’t force a point of view on a section, nor does a section feel like it has been made solely to use a point of view.  It all just flows with the narrative.

The fighting style is almost as varied as the view style, you technically have a sword and a robotic floating sidekick who shoots guns but you can create combos with the sword which causes it to send your sword flying out boomerang style before 9S even comes into play.  You can also set the fighting for auto fire on your little floating buddy and the blocking and combos set up to auto too.  When you setup the play at the beginning of the game, or if at anytime you decide the game is too easy or too hard you can adjust the level of difficulty starting off with easy where pretty much all the more difficulty of the fight is taken out so you can concentrate on the storyline to the hardest setting where everything is manual, save is near impossible and if you get hit once you’re dead.  Luckily there are a few choices of difficulty between these two to choose from, most of which I think fit the average player. As you play you can customize your style by using different chips to change your narrative.  Mixing and matching playstyles as well as weapons result in some very different experiences and maybe some achievements as well. 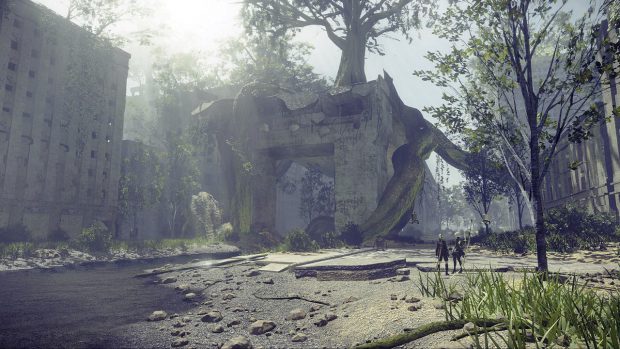 The music score is really beautiful and flows nicely with the scenery.  The voice acting is topnotch and helps pull you into the moment rather than out of it.  There is only one thing with annoyed me a bit but is purposely part of the difficulty of the game: there are no player saves.  There are places you can find where the game with save your progress but if you don’t find them you don’t come back to them and that can sting in the pants if you have fought your way up to a boss without seeing one and that boss lays you flat.  Game over man, game over.

The Become As Gods Edition of Nier: Automata has a little extra content, some costumes and, more importantly, some more missions.  The big sell to a lot of folks though will be the fact that it is 4K and HDR.  The game was pretty before but this drove it over the edge to gorgeous environments.  Part of me thinks part of the “Become As Gods” is the amazing clarity of the game now.  The changes for each run-though are fairly far in so don’t think that maybe you aren’t on a different path because it all looks the same, in the end, or near it, you will see things a new way.

Nier: Automata Become As Gods Edition is a pleasure to play and a feast for the eyes.  The game is as deep as you are willing to dig for it and if you just want a really hard video game it is more than willing to offer that, if you care about story you will play it again and again, probably not on hardest because a one hit kill with no player saves sounds nasty at nicest, it would make getting to the end more than once seem a bit crazy.  No matter your playstyle, the difficulty you choose or the build you use Nier: Automata Become As Gods Edition is a must have for the JRPG player. 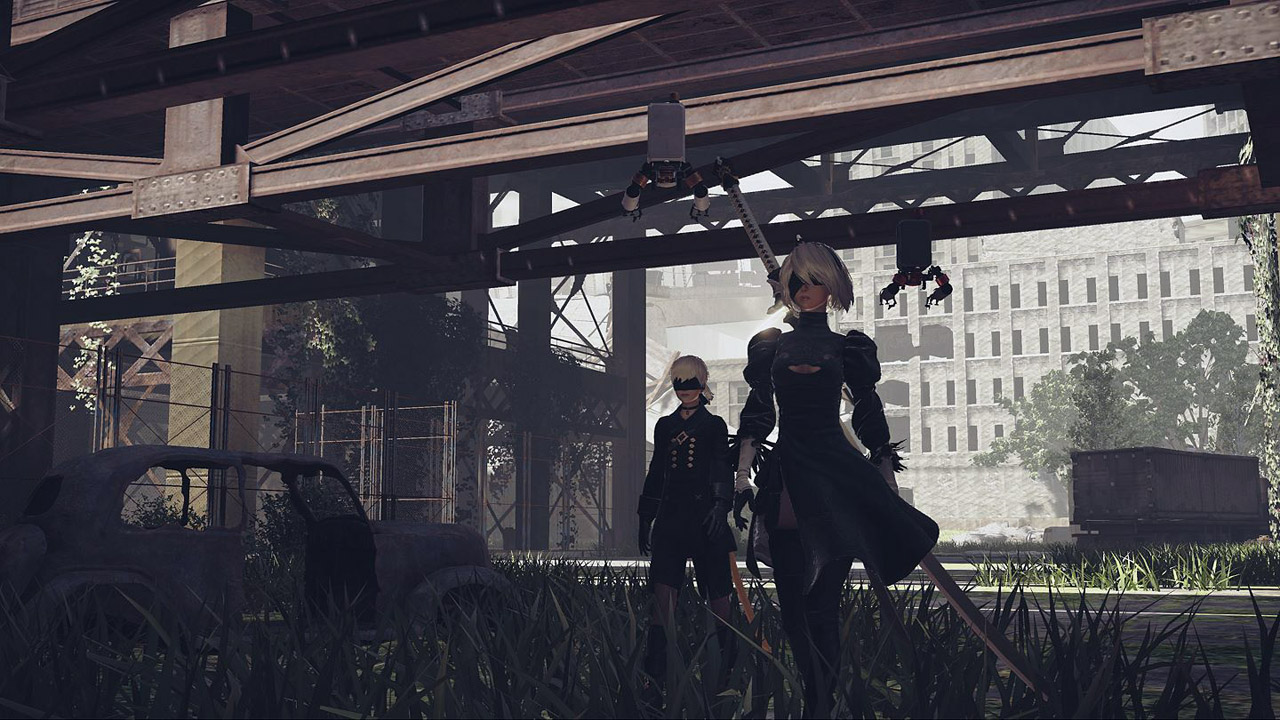