I have been looking forward to Lust For Darkness for a bit with its trailer presenting an adult-themed puzzle game.  I have been playing puzzle games for a really long time, including such famous older ones like Myst from 1993 with its breathtaking graphics. In recent years there has been a surge in video games with adult or explicit themes. Games like Grand Theft Auto V and The Witcher 3: Wild Hunt have very mature storylines.  Movie Games new Lust for Darkness is a puzzle game aimed at a mature audience, bringing us a dark, sexual world that feels like a combination between Stanley Kubrick’s Eyes Wide Shut and Sam Mendes’ American Beauty, but in a sort of Lovecraftian setting.  When you consider how wide of a berth those three descriptions are you get an idea of where Lust for Darkness treads.

Lust for Darkness starts out with a woman in a sealed room with a note waiting for her telling her someone has spirited her away and locked her in, but it only takes looking at the other item on the desk to get a key and leave the room.  You are in a basement, first person point of view, and everything is lit by little tea candles on the floor.  There are a couple little puzzles to do then you find yourself in a room with sex machines, artificial male genitals, a ball gag and masks. Masks tend to be an important theme in the game much like in Eyes Wide Shut. If you are a fan of Lovecraftian worlds, this game really brings the atmosphere of a Cthulhu setting home as the robed people aren’t just in it for the sex (though they certainly don’t shy away from it either).  Idolatry is really the moving purpose of the game and it becomes fairly self evident by the bronze statues and elements throughout the game.  Yes, you have puzzles to solve but most serve a purpose to drive the story forward rather than just having a random puzzle to be solved and increase the play time of the game.  There are actually not that many puzzles to solve if you just want to finish the game’s main story. However, if you want a richer experience by doing the side stories your game experience will be much longer. 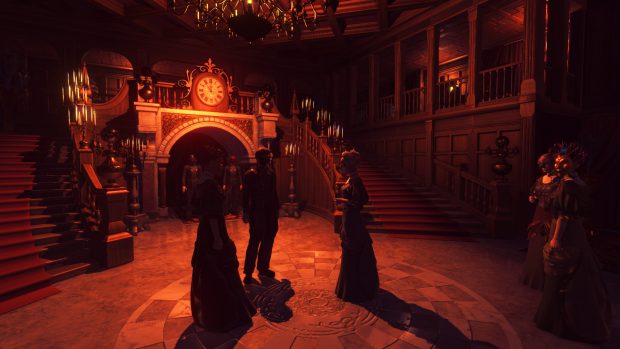 A few days ago the developers put out a note to the community addressing concerns brought up by players who review the game for Steam and the chief concern was the length of the game. However, the playtime stats referenced by the devs showed that most players hadn’t done the side missions.  If you search around for side stories the game length gets longer really quick and the motivations of some of the characters come into light.  If a player wants to just see how fast they can blow through it, they should realize that they aren’t getting the full game experience.

The game has both really nice graphics as well as musical score, both of which help create the Lovecraftian horror as well as the adult/sexual situations.  Lots of detail work has been done on the idols, masks, and horror elements but a little less detail in the sexual participants – though it is always quite obvious what sex act is being performed (and any “toys” used are detailed as well).

The biggest drawback to the game I saw was that there were no manual player save points, the only game saves are when the game loads a new section.  After it loads and you hit continue that will be your save spot until the next continue.  This can be a little frustrating to discover if you play pretty far past the save spot and go to quit game you will lose all the progress you gained.  Basically each time a continue comes up you need to be sure you can either play until the next one or can leave the game open on your desktop while you do whatever life throws at you. 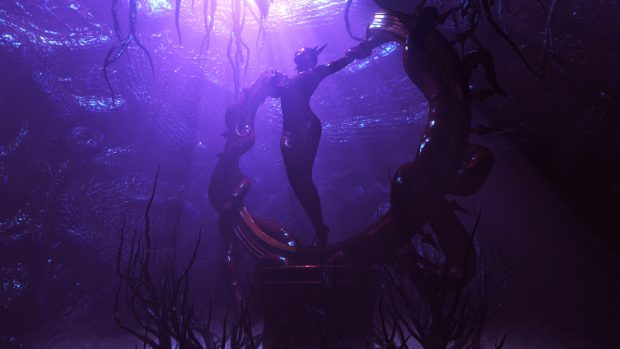 The subject does come up of whether the sexual situations seemed gratuitous or an important part of the storyline.  It could be argued either way but I think when it comes to the plot it makes sense to have these adult elements just as much as it made sense in the previously-mentioned Eyes Wide Shut. Without these elements, the story wouldn’t be the same and Lust for Darkness should be commended for how well it weaves them into the story.  It shouldn’t really come as a surprise to anyone either since it was funded on Kickstarter and was the last ever Steam Project Green Light. Also, in the game’s description it lets you know it is adult themed and even their gameplay examples made it really obvious.  I think the only surprise to me was that one of the platforms it is coming out on is the Nintendo Switch, which is in general considered the family, kid-friendly system.

Lust for Darkness is a fun game that you really should play in darkness with a headset on so you can get the full effect of its dark world.  The game can be fairly short but the price is also fairly inexpensive and the developers have already been talking about putting out possible additions on it to explain the mysterious ending more and well as explaining some of the mystery in the harder side missions.  Lust for Darkness is an adult-themed Lovecraftian horror story told in a puzzling mystery style that will keep you guessing even after the game is over…