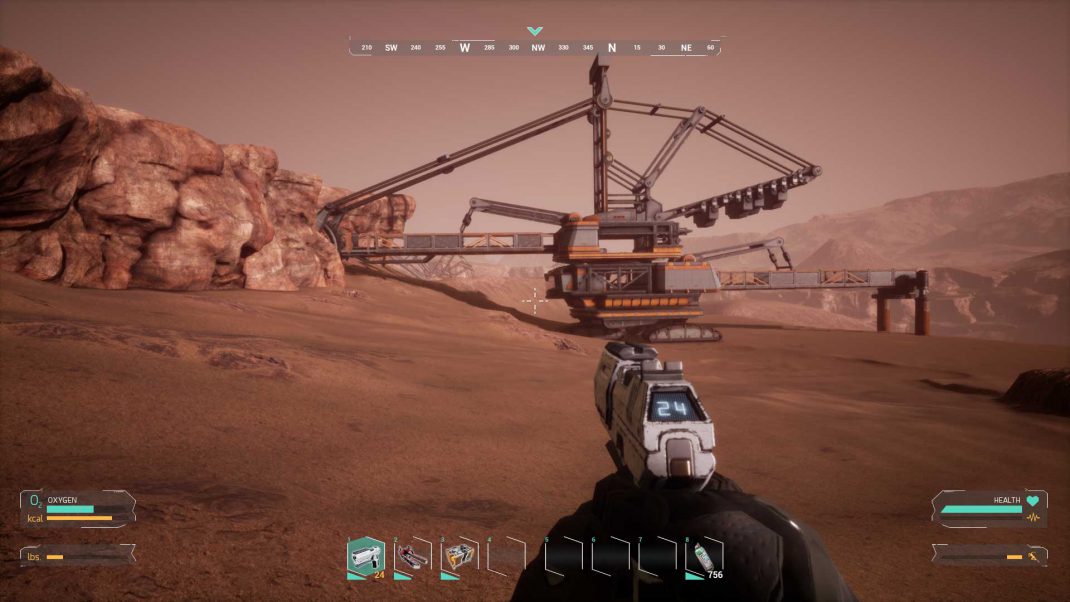 When I saw Memories of Mars coming down the pipe, I was hoping I would get the opportunity to play it.  Memories of Mars looked like a combination of a FPS and a building survival game that borrowed its feel and graphic styles from games like Halo and Mass Effect Andromeda, both of which I have played like crazy. Luckily I got my hands on the game’s Early Access build so that I could get a true feel for the game without having to wait until official drop.

When you first show up on Mars though you are running around picking up ore and raiding any buildings you can find for ore, parts and schematics.  You start with an empty gun and though you really don’t have to worry about players killing you to start off you do have to worry about robot spiders, robotic sand worms and other such AI creatures.  Until you get some ammo you can fist punch but that is not much of a comfort.  The moment you can make bullets you’ll want to, but first you must find the 3D printer and that machine is the cornerstone of early survival.  If you pay attention before exiting the cloning center you can find a portable 3D printer and more can be found through out the world which is nice since if you die everything including what you are wearing and what you are wielding is left on the corpse, there is a good chance that whatever killed you is there protecting your corpse from being recovered.  Or if you are as unlucky as I was another player watched me die at the shots and mechanical claws of spiders then waltzed right in and took all my loot, lots of minerals, med kits, 3D printers and a gun with bullets.  That is quite a bit to recover from especially considering that the buildings you raid don’t repopulate their loot just because you die.  If you lose your corpse you just lose those resources. 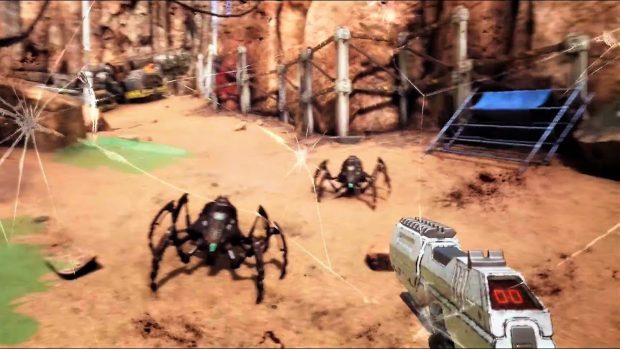 Once you get the ability to make an ore drill you can start mining all the giant rock piles you see around the world instead of just picking up little rocks here and there.  Scavenging both on the Mars surface and in the abandoned (?) buildings gets a kind of grind feel to it as you collect more and more ore to survive but the more bullets you have and the nicer the gun you upgrade to the happier you will be when a whole bunch of mechanical spiders set their glowing eyes on you.  The problem is the game doesn’t have any training lessons so I had no idea at first I could just use the 3D printer in my inventory to make a gun.  I thought that was something I had to discover the schematics for then go to a 3D printer in a building instead of the one in my inventory.  I happened to ask someone passing by in the world about guns and he said to just make one and the bullets.  All you need are simple resources which is nice since you need a resource for the drill which is harder to come by.  Building at first is also confusing since there seems to be limitations on what you can make and how but it isn’t clearly spelled out.  The game banks on the fact that the player has played open sand box style survival games like Mass Effect Andromeda but have the skills of a FPS like Halo or Destiny, which isn’t an unreasonable assumption but it has its own style of making and building things which could use a little tutorial.  Figuring out how to get aluminum, a key element in crafting, took me quite some time.

“Flops” are what you are looking for above all though.  Flops (or floppy discs) can be found on the corpses of mechanical spiders and other rogue machines as well as found on counters and in storage locations.  The Flops are used to level up skills through out different skill trees that tend to mirror how a player prioritizes their style of play, so one might concentrate on gathering, another might concentrate on healing or another on guns or armor.  Your Flops kinda act as leveling up though how many you get depends on random drops from mechanized corpses as well as finding them in abandoned buildings so they are rewards for scavenging and fighting rather than leveling.  You can even take them off a fellow player’s corpse which happened to me when I was saving up for a really expensive upgrade and died… only to find myself with nothing to show for it after someone raided my corpse along with everything else. 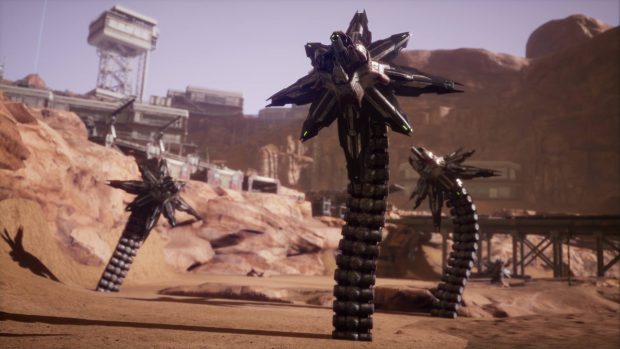 One last note I highly suggest that one of your first unlocks and builds using your Flops is the Excavator which allows you to break down big rocks for nitrate and iron, the key elements in bullets.  Aluminum plays an important part in the game too when it comes to making items but the first thing you want to do is make sure you have a pistol and lots of ammo because the ammo is sub-par and will have you burning through half a clip just taking down one mechanical spider.  There was a misfire element too but they have suspended it at this time of writing since players are having a hard enough time with low damage from it.

Things will no doubt change in Memories of Mars, how it is every day there is a downtime for the server so that bugs, stuck points (of which I found two) and other changes can be made to maximize the experience.  If you are looking forward to a polished, little to no bugs game you probably want to wait for the game to leave Early Access and start going into its persistent world world then you will want to wait for the official release.  If you like to enjoy low populations while you are getting a feel for the game and help the developers know where there are holes in the world or stuck points the time to strike is now.  I actually have had a hard time tearing myself away from the game long enough to write this.  Hope to see you there!