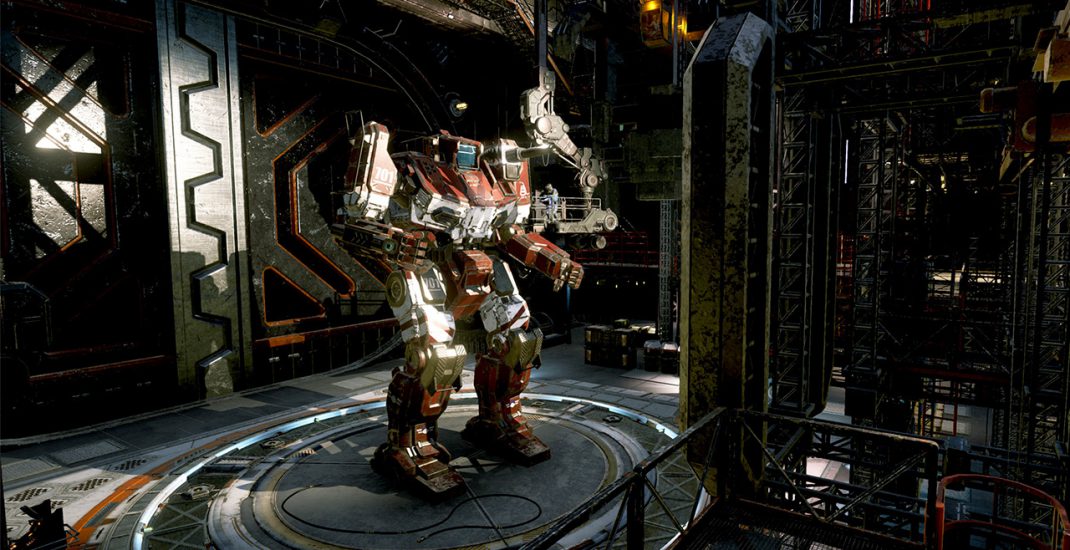 Q) MechWarrior is one of those franchises that has had turbulent licensing history going back to its initial years. Now that things have settled down and Piranha Games owns the rights to the MechWarrior game series, can you tell us about any unexpected challenges you’ve had to face while developing MechWarrior 5 Mercenaries?

While it’s true that through its history there have been a number of legal issues around the IP in general, we have had a license to the IP since 2011 so that hasn’t really been one of the challenges I would say. The main challenges for MW5 have centered on making a great Single Player experience. With MechWarrior Online we have many years’ experience in PVP but not in PVE story telling aspects. Having said that we have inherited incredible advantages from the past 6 years in MWO development. We have access to nearly 100 unique mech chassis and a general know how on fun mech combat.

With these big advantages of working with MechWarrior for over 6 years were committed to making the MW5 everyone has been waiting so long for.

Q) How open-ended will the campaign be and how is time handled? Is it all set within 3015 or will the game span years? Will it be real-time or can the player advance its passage for brevity?

The game starts in the year 3015 but actually has an advancing timeline right up until the year 3049. That gives the players a 34 year career path and although there will be a main story for the players to enjoy the game is extremely open ended and you can take mission anywhere in the Inner Sphere you want.

As you progress through the timeline, you’ll take on new contracts, hire additional pilots, techs and increase your reputation.

Your goal will be to achieve elite mercenary status before the year 3049 when you will be needed!

Q) Setting the game in 3015 is a time ripe with interesting events and chaos for the Inner Sphere. Will the game take into account BattleTech/MechWarrior history like the Marik Civil War, etc?

Q) One of the things that always appealed to me while playing in the Virtual World BattleTech games, then the early PC titles was how damage modelling was handled. There was a great deal of strategy in where you hit an enemy mech and with what. How is mech damage being handled in MechWarrior 5 Mercenaries?

Great question, we recently released a trailer and a lot of details outlining how damage will work. In MechWarrior 5: Mercenaries damage is important – not just on you’re Mech itself but also it plays a role in the environment around you. The Mech’s themselves have 11 different components that each have 3 different model states to show armor, structure and destroyed. So pin pointing specific deadly weapons on opposing mechs or going straight for the Center Torso will be yours to decide.

MW5 will have the most advanced Mech and environment destruction yet in the MechWarrior IP.

Q) As an avid player of VR titles, I have always wanted to pilot a mech in a virtual reality space. Will MechWarrior 5 Mercenaries support any VR solutions out there (pleeeeease)?

We are definitely thinking very seriously about this and we have several strong champions on the development team. I want to say yes but I think we’re going to be watching the VR market very closely over the next few months before we make that decision. Our priority is to make the MW5 game people have been waiting more than 15 years for, everything else has to be secondary.

Q) Piranha Games has also developed the popular MechWarrior Online and some gamers we spoke with were curious: How much common code does MWO and MechWarrior 5 Mercenaries share?

When it comes to code it would not share any. These are completely different engines so it’s not really possible. But we have been working with MechWarrior for almost 7 years and all that coding experience on MWO definitely comes into play. That great MWO combat feel will be brought over intact with all the improvements that come with getting a second chance to rewrite aspect.

No – this is a stand-alone game and if we do any additional content we’ll probably feature it in a tradition DLC model or even expansion-level content.

Q) It has been announced that MechWarrior 5 Mercenaries will support mods through the Steam workshop, etc. Just how much can be modded in the game? Are Total Conversions possible or is it mainly modding mechs, levels, etc?

There should be very little in the way of limitations, looking at other Unreal 4 based projects will give you a fairly good starting point on what to expect. Expect a lot more information about this later in the year.

Q) Finally, is there anything else you’d like our readers to know about MechWarrior 5 Mercenaries before we adjourn?

Thanks for taking the time to chat with us. I think we want gamers to be as excited as we are for MechWarrior 5: Mercenaries. We all grew up with BattleTech and MechWarrior and are making the game that we as fans want to play. And we hope that even if someone has never played a MechWarrior game before we think they are still going to love MW5!