You’re running across the clay shingled rooftops with weird metal boxes strapped on your hips.  You are trying to catch up with a naked… person who is a couple stories tall and doesn’t appear to be all there in the head.  It stops and picks up one of your comrades and you suddenly have a very short time before that teammate gets eaten.  You rev up the gas motors, pick a spot of attack and swing down trying not to save the day but to at least save the moment, there are too many Titans left to fight and a Large Titan was just reported across town near the Defense HQ…

Attack on Titan 2 is based off an anime which is in turn based off an extremely popular manga.  When the show first came out there was a lot of doubt that it could live up to the graphic novels but not only did it but it ushered in a whole new group of fans who weren’t so into reading comics that went the opposite of what they were used to.  Also Attack on Titan the anime has superb voice acting and animation that explains some parts of the Titans movements that aren’t obvious in still form.  They have very gangling movements and attacks and when part of them is damaged it becomes even more gangly to the point of spastic. 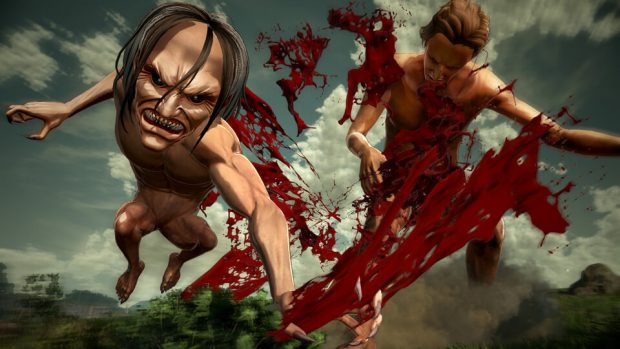 This is the second game in the series and if you liked the first one this one offers more of the same fair with the same style of movements, the same graphics that looked like they were pulled straight from the television show and picking up on season two of the show after a few missions from the first season to catch you up on the action in case you didn’t play the first game or watch any of the show.  I knew the storyline already but watching the cut-scenes put me right back into the feel of the show and I had only watched through season one so after a certain point the story was fresh for me.  I don’t think it mattered though.  I think that even if I didn’t know or pay attention to the storyline I would still have enjoyed the game just as much.

Once you get established into the game and caught up on the previous season you have the opportunity to customize your character and you can REALLY customize them so that it’s not just their name you have picked but just about everything visual was your decision too (I gave mine an eyepatch, I was sloppy in training and felt I would have put an eye out).  Then it is literally time to go off and get into the swing of things.

Mainly you swing around like Spiderman then attack like Deadpool with his swords.  It’s actually a little strange how accurate this description of your primary attacks are, they make you feel really powerful and kinda like a superhero which in this game’s universe you kind of are.  You are part of the defenses expected to take the most casualties which you probably will approach a bit blase about but then find out is pretty accurate when you start taking heavy losses. 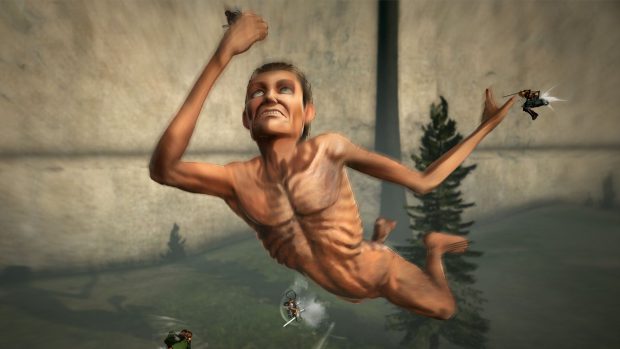 When you are out running around you are generally given a team to control and order around but if you come across a unit you would rather use you can dismiss one of your team and add the new member.  This can result in a really strong master team to control or you can just leave them to do their thing and they will usually fight in the area you are and attack as best they can.  I found it more fun pushing my attacks rather than ordering around my team so they were mostly left to try not to become Titan food.

Another aspect of the game that can help your fighting is in between battles when you work on your friendships with other fighters, which level up through answering their questions right to build friendships.  The question section you would think would be pretty straight forward, the most optimistic answer being the best but there are some real negative people in your squad and if you talk too chipper to them they will see you as a fool.  So when answering you have to think of how they have acted so far.  Some characters might give you respect just by saying you are all going to die soon anyways.

When you start out you have a fairly straight forward blades and gas tanks in your Omni-Directional Mobility Gear, the system that lets you swing between buildings, climb the sides of them and also pull out blades to slice and dice.  Through battle you earn money and mineral resources, both which are used to purchase new ODMGs or reinforce them using minerals that can be bought or cut off of Titans.  Making a Superior kill on a Titan where you chop it’s still grinning head off earns you medals which earn you money but cutting off a Titan’s elbows and knees might allow you to collect more minerals as it flops around like a dying fish (actually it is regenerating so you’ll want to behead it soon).  The upgrades help you get bigger gas tanks, larger supplies of knives and can even make it so that you can launch yourself from much farther away, improving your chance of a sneak attack.  Sneak attacks allow you to look at a Titan through a telescope, pick a spot to attack and go flying in.  I’m not very lucky at it but that doesn’t stop me from trying. 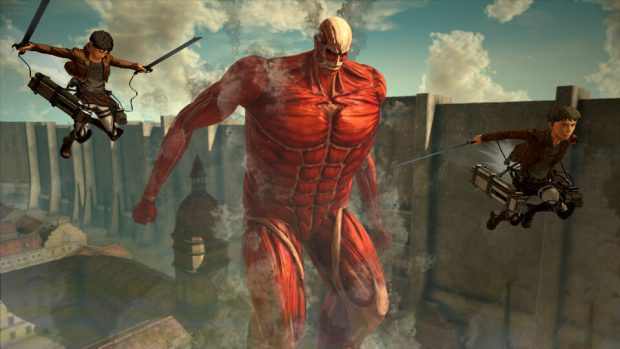 When a large Titan arrives they generally have some kind of extra issue you have to deal with like having a force field you need to work on as well.  For this I put my team on the limbs and I just attacked the back of the neck over and over.  When they would manage to get the shield down enough briefly I would manage a hit or two on the neck lowering main health, and soon we would take them down.  There are little pods around town that after a certain point in the game you can make into resupply hubs in case your gas or blades are getting low but they are also places you can build defensive towers that help particularly with the shorter Titans when that gets enabled.  They can also be used to distract a Titan from attacking something else or eating someone.  Strategically I found the tower locations to be saviors quickly, especially when it can to side missions.  Some side missions are as simple as saving a wall guard from being eaten to stopping a building across town from you from getting stomped flat.

This brings up one of the problems I found in the game, there are no personal save points out on the battlefield.  At one point I was doing a mission on one side of town and the game gave me a new one across town – to protect an important building.  The way things worked out, everyone had been fighting on the opposite side of town so within moments of all the Titans that happened to be standing there demolished the building.  The game asked if I wanted to go back to the last checkpoint, I selected yes and found out the last save point was a couple seconds before the titans completely demolished the building. My only choice was to restart the mission which put me back a decent ways.  A person more rage oriented than myself might have lost their cool at that moments but instead I went to the buildings side of town when I got restarted and killed a bunch of Titans.  Apparently the mission across town wasn’t too time oriented because I built artillery towers as well as whacking all the Titans I could see.  Then I went back across town, did the bare minimum I needed to to complete that quest and ran full steam to protect the building which I did and happened to forward the story so the game saved.  I can understand making the game more challenging by making it so players can’t save as they go in the field but I think the frustration level outweighs it. 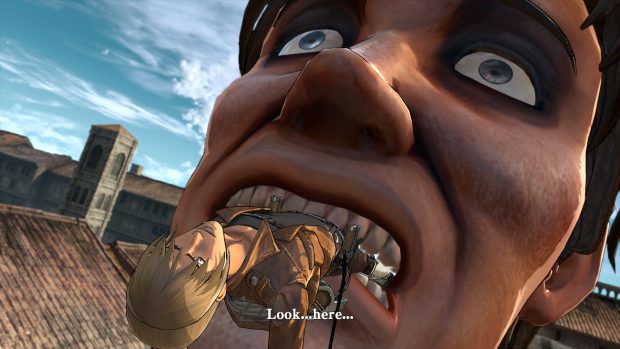 I can’t see anyone doing more than a momentary rage quit though because the Titans are so much fun to kill.  They are so insanely creepy and gangley that you don’t get from the comics and you don’t quite get from the anime.  In the anime you see them move in there horrible spastic manner but when you are fighting them and your character has been snatched up and the Titan is trying to eat you it is as creepy as something out of a horror movie.  When you chop off limbs and they start flailing but do so with that still vacant smiling stare you really look forward to putting it down.  I look forward from my attacks from the rooftops not just because it increases my chances of a Perfect Elimination but because there is also far less chance of it reaching out and trying to put me in it’s slobbery mouth.

When it comes to Attack on Titan 2 you can swing like Spiderman, attack like Deadpool with blades and you fight creepy horrors that are unique to the Titan universe.  I didn’t get to play the multiplayer 4 Vs. 4 Titan Takedown Challenge but I’m sure I will because this game is as addictive as they get. 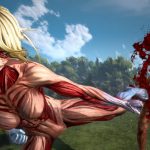