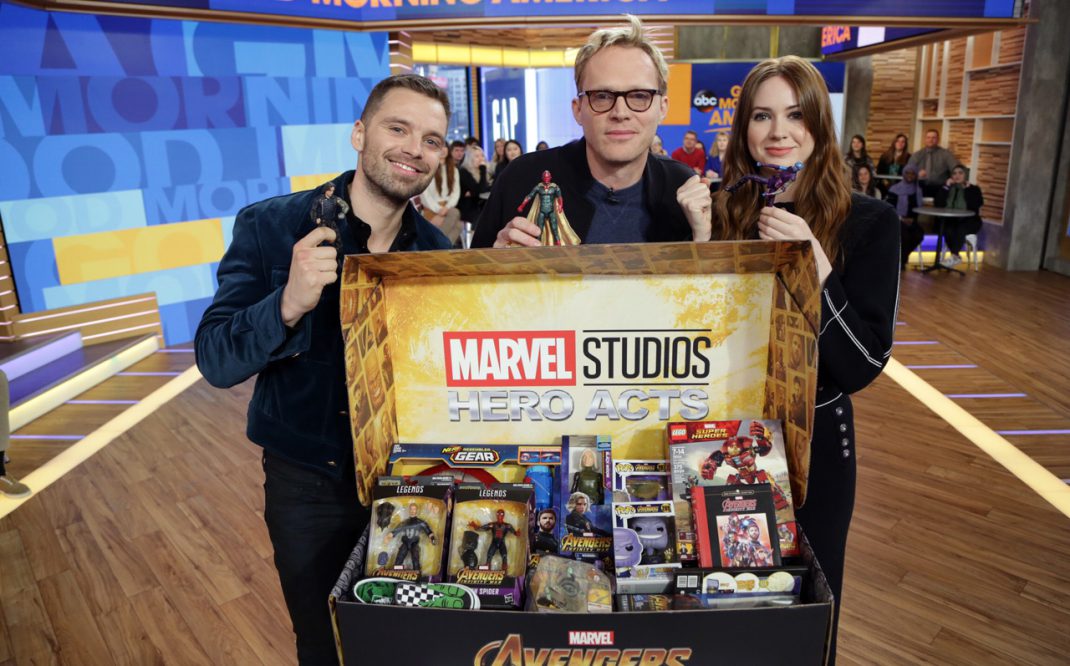 February 27, Los Angeles, Calif.—The Walt Disney Company today announced Marvel: The Universe Unites, an epic charity campaign combining the super powers of the cast of Marvel Studios’ Avengers: Infinity War to help support children’s charities. The week-long event will see stars of the movie team up for a series of hero acts and social media challenges to provide funds and raise awareness for charities that support children and families impacted by serious illness. The initiative will culminate the weekend of March 3 when shopDisney.com and Disney stores in the U.S. will donate 10% of sales of all Marvel products made between March 3-4, 2018 (up to $50,000) to Make-A-Wish® to help grant life-changing wishes for children with critical illnesses.

“This movie has one of the greatest ensemble casts of all time, and we are challenging them to use their collective might to benefit children’s charities,” said Jimmy Pitaro, Chairman, Disney Consumer Products and Interactive Media. “We’re kicking off by inviting some of the world’s biggest stars to get creative on social media to support Starlight Children’s Foundation, a charity that works to bring joy and comfort to hospitalized children and their families.”

As part of Marvel Studios: Hero Acts, a charitable initiative launched in 2016, some members of the cast of Avengers: Infinity War will receive a special toy care package filled with new products celebrating their Marvel character to be donated to children’s hospitals.

Their mission? To take a creative picture or video to reveal the new toys to fans and post it to their Facebook, Instagram or Twitter channels using #HeroActs. When their collective posts hit a million likes, they will unlock a $250,000 US donation to Starlight Children’s Foundation® from Marvel.

“Being a Marvel Super Hero gives us a powerful platform to directly influence positive change. Giving back to kids is the most impactful role you can play,” comments Marvel Studios’ Black Panther star, Chadwick Boseman. “Marvel: The Universe Unites and #HeroActs is just a fun way to support a noble cause while entertaining kids and fans around the globe.”

Marvel partners are also supporting the cause with their own #HeroActs in support of children’s charities. As part of the week’s events, Hasbro will donate $1 million US worth of cash and products to Give Kids The World, an organization that fulfills the wishes of children with critical illnesses and their families by providing them with an unforgettable trip which includes a visit to their village in Central Florida and access to Walt Disney World Resort.

Funko, known for their pop culture collectibles, will make a $1 million US toy donation to Starlight as part of the Marvel: The Universe Unites campaign.

“From our fantastic cast to our toy and retail partners, it’s great to see the Marvel Cinematic Universe come together in this way to support children’s charities,” comments Kevin Feige, President, Marvel Studios. “The launch of the products forAvengers: Infinity War is a fun way for fans to celebrate the countdown to the movie, and this initiative underscores that moment in a really special way.”

Rounding out the week, on Saturday, March 3, and Sunday, March 4, shopDisney.com and Disney store will donate 10% of weekend Marvel product sales to Make-A-Wish® (up to $50,000 US) in support of Marvel: The Universe Unites.