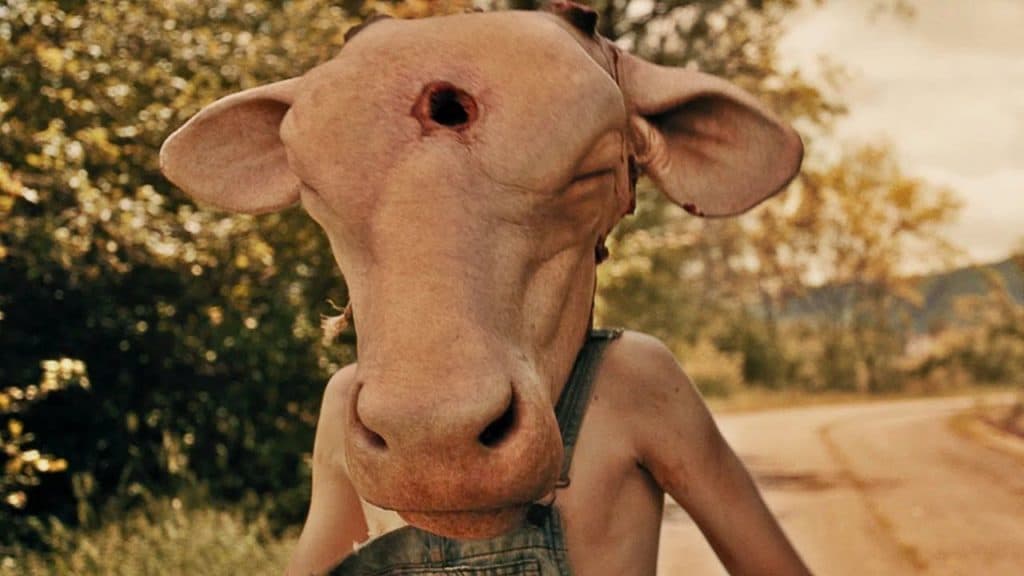 The late Tobe Hooper’s The Texas Chainsaw Massacre is a seminal horror classic – one which, when released in 1974, caused massive controversy and spawned a whole new type of horror film. Unfortunately, it also spawned a large assortment of unsuccessful sequels. The latest in this line of sequels is actually a prequel film titled Leatherface from Lionsgate. However, much like Rob Zombie’s prequel of John Carpenter’s Halloween, it largely does not work on many levels.

The film starts off at one of Leatherface’s childhood birthday celebrations. We find out that Jed Sawyer (the actual name of human skin mask-wearing killer) will not take a life when prompted by his Mother (Lili Taylor) and family, showing that he started out with somewhat of a human heart. Eventually, Jed finds himself in a mental hospital after the Sawyer family kills the daughter of the local Sheriff (Stephen Dorff) who then vows revenge against them. Ten years later, four patients including Jed (now under a different name) and one hostage, a nurse (Vanessa Grasse), escape the asylum and go on a gore-filled road trip. Leatherface makes some huge mistakes – the biggest being what Rob Zombie did to Michael Myers in his Halloween prequel: He made him a sympathetic person. We see Leatherface as a young boy and young man with feelings and as someone who even comes to the rescue of other people at times. It humanizes the deranged behemoth we see in the original film and hurts that movie in the process. They do this to bolster a surprise reveal midway through the film which makes no sense given how Leatherface appears in the original film. Biologically, it simply does not make sense.

The second big problem with Leatherface is that there are no “good” characters in the film that you want to root for or put the viewer in the situation. The closest we have is the nurse character, and she doesn’t get nearly enough time to develop and ends up pushed to the background due to the more powerful performances by some actors in the film. This is not to say that Vanessa Grasse is not a good actor – she is and it shows in what she has to work with. Her character is simply not written in a way that allows her to shine like she could. Even the Sheriff, whom I had hoped would end up being the “good guy”, ends up being corrupt. In fact, most every character in this movie is corrupted in some way except. You NEED a character the audience can connect to in these films. Without it, the film loses that gnawing and building tension that keeps an audience engaged and hoping upon hope that the “good guy” doesn’t end up a skin mask.

The third big problem in the film is that, while the movie is titled “Leatherface”, it doesn’t focus enough on Leatherface! Instead, it ends up focusing on a number of other characters doing “bad”  (or just plain stupid) things in a poorly-presented manner. What is very clear is that, despite a couple enjoyable previous films, French directing duo Alexandre Bustillo and Julien Maury do not have a grasp on what made the 1974 film great. What’s weirder is that the writer, Seth M. Sherwood, doesn’t have any other writing credits to speak of on IMDB. How does a two-person directing team and screenwriter with a handful of credits between the three of them get put at the helm of The Texas Chainsaw Massacre prequel movie?

Leatherface does have a couple bright spots, though, namely in its cinematography and performances. Lili Taylor, Stephen Dorff, and Finn Jones all put in great performances – again, with that they are given to work with. The film is shot beautifully, with foreboding angles, dark moodiness, and well-lit gore.

Unfortunately, I just can’t get behind Leatherface as a horror film or, for that matter, film I would buy or rent despite some good cinematography and performances. Those two factors are the only things which saved Leatherface from being rated at 1 out of 5 stars. If you really are craving this kind of horror movie, you should just rent or buy the original film and skip Leatherface altogether. It devalues the original film – especially if you have never seen the classic movie before.