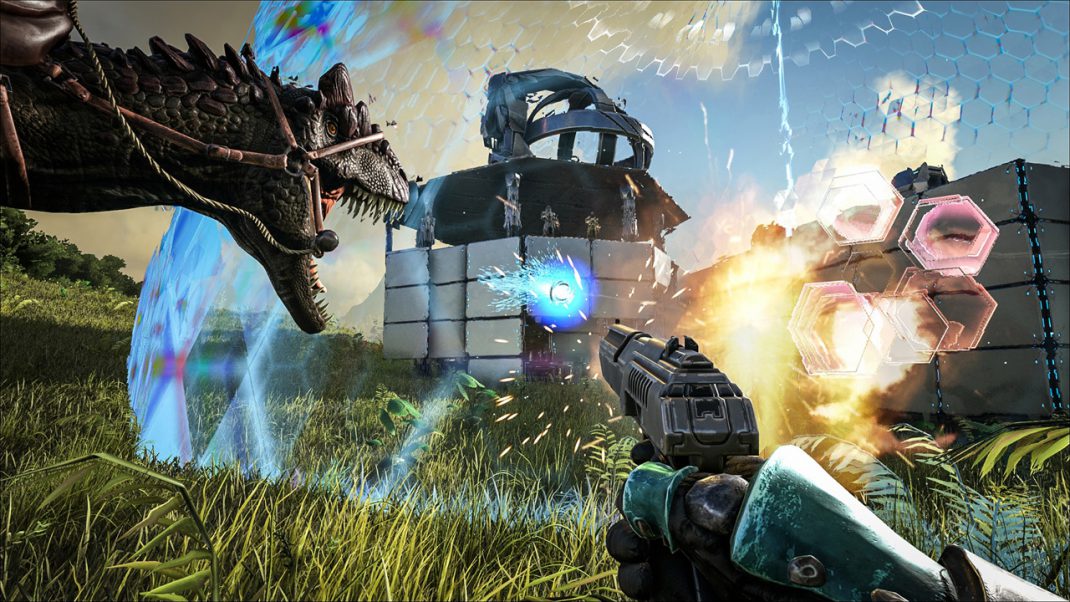 Before I hit the age when I got a BB gun, I used to have my plastic dinosaurs fight my plastic soldiers all the time.  I lost a lot of them in my great grandma’s back yard, never to be seen again. I never lost my fascination with dinosaurs. When I learned that we could not only fight dinosaurs but also ride them – not to mention taming sharks, cage dragons, and more, I knew I had to play ARK: Survival Evolved.

Dinosaurs, Dragons And Sharks, Oh My! 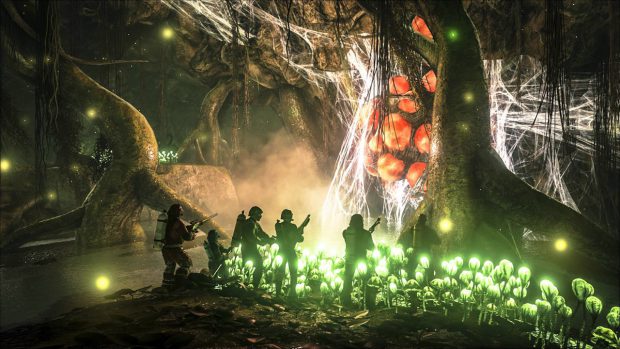 ARK: Survival Evolved gives you a massive online experience that starts with very humble beginnings.  You wake up on a beach, pretty much naked, and you have to construct some shelter and defenses.  You have to forage for your own resources and protect yourself at the same time. If you have the means, I definitely recommend starting this game with a friend  so you can watch out for each other and work towards common goals – in this case, surviving.  Another important thing to consider when starting ARK: Survival Evolved is whether you want to start out on a PVP or a PVE server.  In case you don’t know the difference, PVP means “Player Vs. Player” where other players can kill you and loot your corpse for your stuff.  Most players who play this type of server try to find a big group to join or bring friends along to play together.  If you think that it is hard enough, you also have to worry about everything from bugs to dragons wanting you dead! If that isn’t your cup of entertainment, you might want to play on the “Player Vs. Environment” server where players cannot kill each other.  If you are a lone wolf player or, like me, a reviewer who finds he likes a game but knows he probably won’t get back to the game in months, then going PVE makes sure no one boots you from their tribe for inactivity!

Once the server is chosen, you’ve landed on your beach, you can start punching trees for wood and work with stones so that you can get to the “Stone Age” of your existence and are not trying to kill bugs and small dinosaurs with your fists. Many of the dinosaurs roam in packs and you will be outmatched without some good old human ingenuity.  Since you out in a diaper and hungry, staying warm and getting food are your first necessities. 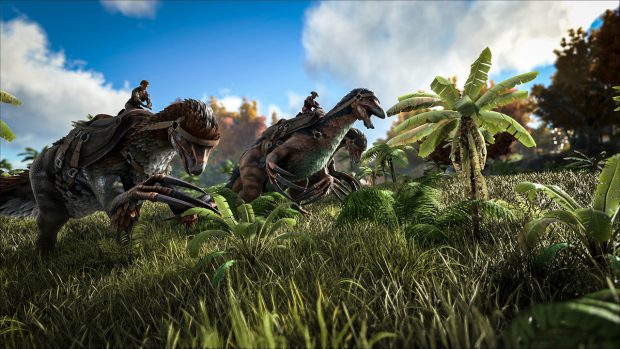 Another cool thing is I know as I am going in I will start with sticks and stone axes but eventually I will have sweet guns and have the ability to tame creatures in order to use them as mounts.  Also some of the animals you can’t ride, but you can use as pack mules! This is really cool as you will have a second dinosaur following you around with all your stuff.  Speaking of stuff, you get recipes to make most of your items, although loot drops do exist as well.  The important thing is you need to know this game definitely has a grind and a pretty long one at that, during which time you have to be willing to dedicate yourself to to get to the end content.

If you find you need a break from that grind, you can play the ARK: Survival of the Fittest multiplayer arena game which is included with ARK: Survival Evolved. This game mode could could have been called ARK: Hunger Games with Dinosaurs in terms of its design. The biggest departure there is that you work in tribes, not by yourself.  In this mode, you and your tribe are in a dome and you have to run around and try to kill off all the other tribes.  When someone gets killed, their face gets projected up on the dome along with who killed them – last tribe surviving wins.

ARK: Survival Evolved is a huge multiplayer game that, while featuring a grind, has some really great content to explore as well as cool end game capabilities.  The only limitations in the game are your imagination and with how well your latency holds up on a 70 player server.  In addition, the game recently got a map expansion and a bigger game expansion is due out in October.