When the opportunity to review The Monster Project came along, I was completely excited about it.  I didn’t know the filmmakers for their celluloid works but, instead, for their annual interactive haunted attraction known as Delusion where the guests play a part in the storyline. Delusion is only accessible by reservation and sells out quickly every year (this year they are dark, unfortunately).  I’m such a fan I even have a poster and a plague doctor’s mask from one year’s production.  Knowing that these people can take you into a setting and make you feel like you are part of a movie I figured the chances would be great that they could pull off the easier task of letting us sit back for a change and have them do the movie magic. So I gladly screened The Monster Project.

A Story You Can Sink Your Teeth Into:

The premise they came up with was fairly straight forward but not one that had well-trodden on by other movies yet.  A small group of filmmakers, who up until now had made to fake viral monster videos, decide to do a documentary on people who think they are really monsters.  They put out a casting call for people in the area who might think they are possessed by demons or suffer from conditions such as Lycanthropy or Renfield’s Syndrome (clinical vampirism) to come and be interviewed for the documentary.  It doesn’t take long before a man claiming to be a Native American Skinwalker, a woman claiming to be possessed by a demon, and woman claiming to be a full blown vampire each contact the group in their own special way to apply for the interview.  They rent out a derelict house for atmosphere and get ready for the night. 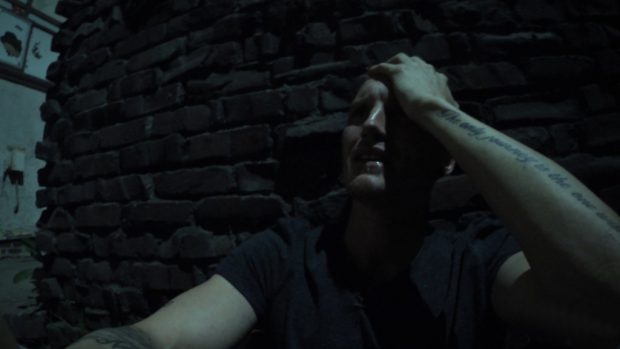 The crew consists of the “idea man” Devon (Justin Bruening), his videographer Jamal (Jamal Quezaire), Devon’s ex Murielle (Murielle Zuker), and a recovering addict named Bryan (Toby Hemingway). Bryan is a close friend of Murielle and someone her and Jamal havce taken in to give him a chance to get back on his feet.  As a gift for his sobriety and his birthday, Murielle gives Bryan a GoPro which helps us have another view of the happenings directly from the head of one of the characters as this film is shot in somewhat of a “found footage” style.  It also lets you know how people are feeling by being the “fly on the wall” in dramatic moments.

We never get a good look at the Skinwalker played by Steven Flores as his characters requests to be kept in the shadows to protect his identity and they even use a voice modulator on him.  As a reservation police he wears a body cam which gives us a little more looks at situations that I will get back to but it does have a certain irony that the monster we hardly see helps us see the crew better.  Then you have the demon possessed girl played by Shiori Ideta. Ideta’s character is akin to Kayako from The Ring: She is a petite Asian woman with black hair over her face, pale skin, and a simple white dress.  The pleas she makes to the demon that, she claims, lives inside her can make your skin crawl with creep factor.

The last monster in the mix is “vampire” Shayla (Yvonne Zima), who steals the show.  She has an enticing beauty that pulls you in despite her glowing white eyes.  Sporting a ton of tattoos and making herself at home putting her feet up on the interview desk, there is no question who is in charge of the room once she enters the scene.  The Monster Project has an interesting take on vampirism – especially how they handle a vampire’s dealing with sunlight.  Shayla answers their questions until she decides it is a good time to drop a bomb on the team that sends them fighting among themselves, kicking off a lot of chaos for our filmmakers. 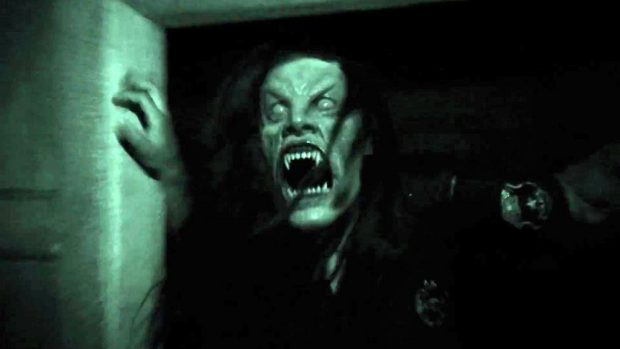 I can’t give away anything else without venturing into spoiler territory, but once that chaos begins, the folks behind The Monster Project really begin to shine.  After years of having to have practical effects that look perfect time after time feet away from a live audience, their coming up with them for a movie seemed effortless.  Using night vision helps with this of course, wires aren’t as visible and the image is somewhat distorted. A GoPro carried by one of the crew is also a savior because they can take it and shoot in sections of a property that might be too difficult otherwise.  The ending is definitely important to catch too because it had a surprise that myself and the person watching it with me did not expect at all.

There were only a few things minor that detracted from our enjoyment of The Monster Project. On the small end of the gripe spectrum, Jamal seemed a bit over the top and, while this helped the energy of the scene, I didn’t believe his delivery some of the time. Also, they seemed to love racking the slide back on their pistol after already having done so multiple times. With semi-automatic handguns, there is a round in the chamber once the slide is racked back the first time. Each additional racking of the slide will eject the currently-chambered cartridge and load the next one in the magazine until the magazine is empty (at which point the slide stays locked back). This is a small, yet technical-detail that I noticed and did pull me out of the scene at points.  There was one big thing though and that was the use of the would-be Skinwalker’s body cam.  Once he takes off his clothing, where was the camera attached to? I love the idea of a body cam view, but someone has to be wearing the cam for it to work, right? I digress, however, as I really enjoyed this movie despite those minor issues. 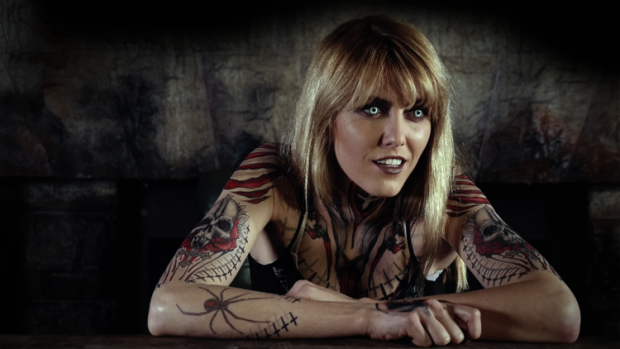 The Monster Project starts off a bit slow but once it gets up and running it starts sprinting with an amazing kinetic energy all the way until the end.  The Monster Project is a great example of how practical effects can be performed on-set and still be very effective to the audience at the same time. Couple that with good acting and Victor Mathieu excellent direction and The Monster Project is a great time – especially if you can find it in a theatrical screening. I look forward to seeing more films from the folks behind Delusion, as long as it doesn’t mean we have to miss out on another year of that!