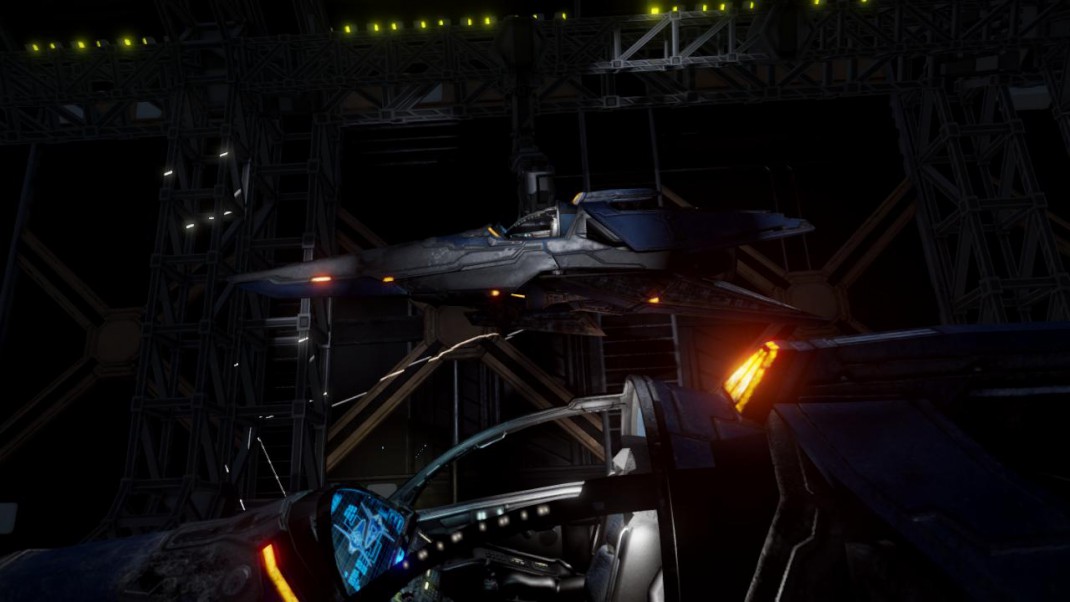 SAVANNAH, GA, April 14, 2017 — Impeller’s comeback Kickstarter for Starfighter Inc. has succeeded with time left for additional funding as the campaign closes tomorrow on Saturday, April 15 at 1:50PM EDT. The team felt it was time to celebrate early with fans of their serious science approach to game design and released an in-engine peak at the player’s starting environment in Starfighter Inc.: a carrier’s airlock and spacecraft hangar.

The latest video is noteworthy as it demonstrates much of the game’s core design in one continuous shot: a pilot’s helmet spinning weightless in zero-G , the hard-science on display on an interactive display, the near future visual look and feel, and the voiceover by beloved British actress Emma Samms sets the stage for the evolving multiplayer story of “corporations that are no longer bound by mere terrestrial laws”.

“This is not only my dream project but also the entire development team’s. I couldn’t be happier  with the support we’ve received from gamers and industry partners for our realism-based vision of space combat ” said Project Director, Jack Mamais, designer of critically acclaimed Crysis™ and director behind the popular MechWarrior 2: Mercenaries™ title. Impeller’s hardware partners for Starfighter Inc. currently include Alienware, HTC Vive, Logitech, Nvidia, Oculus, and Thrustmaster.

Lead designer, David Wessman (X-Wing series of Star Wars Space Combat Simulators™, Blood Wake™, and Saints Row™) noted, “We’re very excited! The surge in support over the last week shows that all our efforts are paying off and people are seeing that Starfighter Inc. really is something new and different. We’re very grateful to all of our partners and backers for their unending support.”

Aspiring pilots can still secure the exclusive Founder’s Edition of Starfighter Inc. for only $25 USD by backing the Kickstarter before it ends tomorrow: https://www.kickstarter.com/projects/impellerstudios/starfighter-inc-0/

Impeller Studios is a United States based indie and virtual studio comprised of developers living around the globe. The team draws experience from across the board, consisting both of industry veterans and new talent. Impeller’s debut project, Starfighter Inc. (SFI), is a PC & VR hardcore multiplayer online space combat simulator, and takes place in a dystopian future set in the 23rd century, where mankind is ruled by ruthless corporations waging a (mostly) covert shadow war for dominance of the solar system. Hard science drives the design of everything in the game including the ships, the weapons, the environment, the physics, and the special effects.
For additional information on the project, please see: