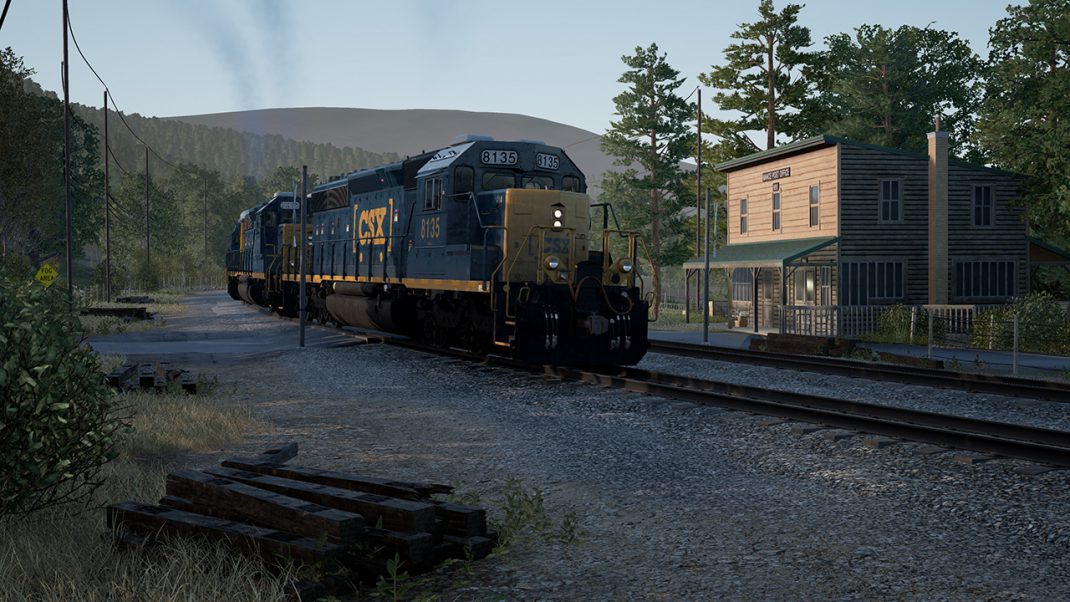 CHATHAM, Kent – March 6,  2017 – Dovetail Games, the multi award-winning developer and publisher of a range of simulation games is pleased to confirm the release date for its brand new train simulation, Train Sim World®: CSX Heavy Haul, which will launch on Windows PC on March 16, 2017.

Train Sim World is built upon the foundation of Unreal Engine 4® technology, and also includes Dovetail Games’ proprietary SimuGraph® vehicle dynamics engine.  It is thereby set to deliver the most technologically advanced first-person train simulation experience on the market.  The first release in the new series, Train Sim World: CSX Heavy Haul, will feature the stunning Sand Patch Grade route, stretching 60 miles across the Allegheny Mountains of Pennsylvania and Maryland in the USA.  The game features seven guided tutorials, which cover everything from getting started with the software to operating the locomotives.

Newcomers will be introduced to the game via an accessible user interface, which will display prompts and highlight key controls such as power, reverse, automatic brakes and horn to get players up and running quickly and easily.  Advanced users will have the choice of using fully functioning in-cab controls with no prompts, UI or highlights. These include digital displays, all braking systems and slow speed controls for coal loading.

Featuring fully customizable weather systems, and built using real-world data to accurately replicate the performance, sounds and feel of real trains, Train Sim World will offer more immersion and authenticity than has ever been seen before in a train simulation.  Players will truly feel the detail as they walk around exploring the world and interacting with the trains in first person mode. With six challenging scenarios, players will be able to take part in operations from the real world such as coal loading, switching, refueling and turning locos on a turntable.  There will also be the introduction of a brand new ‘service mode’, which features the recreation of an entire 24-hour timetable, and allows players to take control of any one of the trains in this timetable – manifest, local and short hop freight services – and activities include giving them the opportunity to experience a day in the life of a real engineer.

Featuring three distinct types of locomotive, Train Sim World: CSX Heavy Haul allows complete interactivity in the cab, so you can gain a thorough understanding of how the train works and how it feels to be sitting in the driver’s seat with the controls in your hands, bringing some of the world’s biggest and most powerful locos roaring to life.

Rob O’Farrell, SVP Development at Dovetail Games said, “We have ten years of experience and expertise in building and growing living, breathing train simulations. Our aim in the development of Train Sim World is to build on this great foundation and take Train Simulator to the next level. Starting with CSX Heavy Haul, Train Sim World will deliver an unprecedented level of quality and realism in every aspect of the game.  We will also continue to develop and grow this experience over time, adding new features and content that enables us to go on this incredible journey together with our community.”

Doug McConkey, Business Director at Dovetail Games added, “At Dovetail Games we strive to create something more than one off experiences; we create immersive digital hobbies that provide years of challenge and entertainment to our highly invested community of players.  Our existing Train Simulator series has sold over 1 million units on Steam and was one of Steam’s top 100 grossing titles in 2016 so we know that we’ve made good headway when it comes to train simulation. Train Sim World: CSX Heavy Haul is just the start of a new era of train simulation and we have so much more planned with our experienced and knowledgeable community.  If you’ve never experienced train simulation before, now is the perfect time to come aboard.”