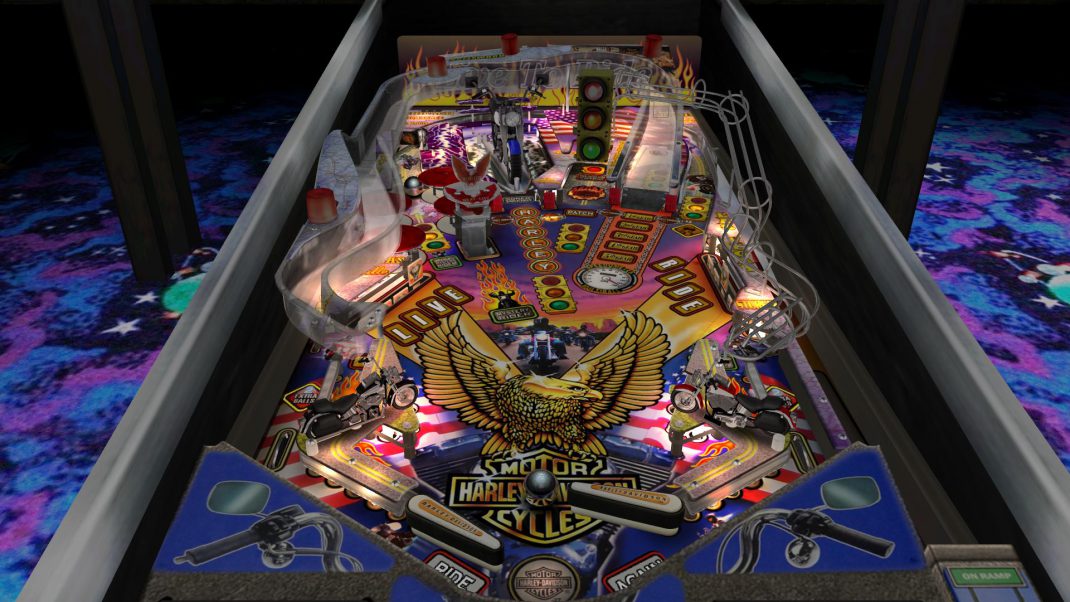 It may seem strange. but in this video game reviewer’s house, pinball is king.  To have our own pinball machines is something so awesome that if we were offered a sexy new car or a dozen of our favorite tables, one of our bedrooms would immediately be converted into an arcade (I think we may even have a design plan for it somewhere)…  Thankfully, The Pinball Hall Of Fame is located only a few minutes away so that when we get the urge to play, or a fellow ball addict comes to town, we can head into that dimly lit warehouse filled with the sounds of games dating from the early ’50s or so up to last week.  So though we can’t get the real thing in our house, we have watched the evolution of pinball video game physics evolve over the years until what they are today which could only be improved with VR.  One question always on our minds is when are we going to get a nice collection of Stern pinball machines for the next gen consoles that can do them justice? Wait no longer as the Stern Pinball Arcade has arrived.

When it came to this review this was one of the first ones where Mrs. Ripper gets to play the tables first. I’m pretty crazy about pinball but she is downright scary. Any of our friends who have come to town and gone with use to the Pinball Hall will attest to how hard it is to get her out of there. At home she has her own game addictions that eat up hours but when the Stern Pinball Arcade game came in playing a few minutes before bed became trying to get to sleep before the sun came up. I don’t put the game’s Description and Features in a review much anymore but Stern was very generous with how many games are in this set and we have played all but one or two at the Hall Of Fame so we just want to get right into the meat and potatoes of each table. 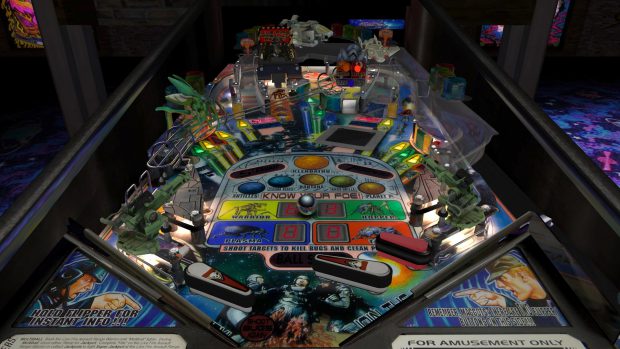 The movie this table is created from of is based off a wonderful bit of satirical writing by Robert Heinlein and Stern has done a great job of melded both into the table.  It faithfully recreates the real table in arcades with maybe a couple of improvements. For instance, the bugs are on springs so they sometimes wiggle at odd times and this is so beautifully represented. This is probably one of my top five all time pinball machines and I have been playing pinball since I was about six! The sound is perfectly crisp with all the great and hilarious soundbytes from the movie. So much happens in this game that it is almost as fun to watch as it is to play and you will find yourself spouting quotes from the game and movie for days to come…  Because it is an ugly planet, a bug planet and the Roughnecks are here to clean it up.

Phantom of The Opera:

This games is one I am least familiar with, but I did recall its amazing artwork. It may have been one of the reasons “Dirty Donny” got his nickname, because the Phantom is portrayed with such care and detail as is the lingerie-clad Christine who looks off the table with a “come hither” gaze. It is a dark and creepy table which suits me just fine (did you know that the Phantom of The Opera is inspired in part by historical events?) and the music on the table which in this rare case is almost as important as the action terrifically rendered. The play is a nice medium paced so that you can take the action in nicely while at the same time enjoying the challenges. Mrs. Ripper and I played for a really long time on this table enjoying the ambiance as well as the action and reminding us a little of a trip to see Phantom in L.A. many songs ago. 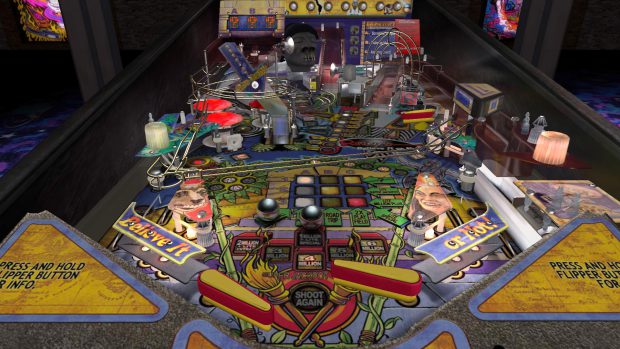 Ripley’s Believe It Or Not!:

This table was a long play for me because I have always been a Ripley’s fan. I had the books growing up, watched the television show, lost tons of money on the casino machine and spent many hours on the real pinball table.  Mrs. Ripper was patient with me while I played a lot at the casino, at the pinball hall and when I was reviewing the video game. Every time the game announced we were flying to another part of the world for another bit of strange facts I found myself caring far less about my score than the trivia I was about to hear. It might be something as simple as “traveling to Australia! You just got a boomerang weapon score!” and show a little animation on the corner table screen but I found myself grinning every time.  The only complaint has nothing to do with the video game but rather the original design of the board which was have no ball save. We have become kind of dependent on those these days.

The fun thing about this table is they just got Arnold Schwarzenegger to just do a whole bunch of his lines from his different movies. I admit that it has been a while since I played the table or watched the movie but that might have actually made it better because I don’t know if they had used all of Arnold’s lines in the movie from all his other movies. I laughed the whole way through playing it and tried to remember when I quote would pop up to say it with the game. This table is definitely more for the heavy pinball player though because it is a hard table with no match at the end.  The ramps are nice but hard to run, you’ll feel you earned it when you get it and the ramp performs some extra action. When Arnold says “Hasta La Vista Baby” you’ll nod with pride or slink on to the next table in shame.

Since The Pinball Hall Of Fame is located in Las Vegas there is definitely a lot of love for this machine and the Hall Of Fame makes sure it is always working at it’s best. So I have gotten a lot of time in on this classic table that really does feel like a full casino. There is a roulette wheel right off the plunger alley, poker hands to fill, slot machine simulations and even the video screen bonus is a high/low game where you push your luck or don’t in real Vegas gambling fashion. There are so many sounds going on the game that it actually feels like a casino when it isn’t your turn. When it is your turn you are going “Come On Black!”

More amazing artwork on the table by “Dirty Donny” as Frankenstein’s monster’s shadow towers over The Bride Of Frankenstein.  The beauty of the table is a bit overshadowed by a terrific rendition of the monster’s head at the middle-top of the machine which turns back and forth as the game progresses. This game gives you a neat and pretty rare opportunity to choose your own music between Edgar Winter’s version and the movie soundtrack. The Edgar Winter’s version is cool and goes great with the turning creepy monster head but “Dirty Donny” did such amazing work with the art that it really feels like the soundtrack fits the game better creating an immersive atmosphere. The table even pushes this further by saying the quote “all that I once loved lies in a shallow grave.”

This game is just a bunch of fun. The front of a motorcycle at the top that pops a wheelie to let out multi-balls, the table plays instrumental versions of Bad To The Bone and Born To Be Wild, all the while blasting sounds of semi trucks, screeching tires, and honking.  It sounds like you are flying around on a mad road trip on your hog and there are plenty of close calls. Then a four ball multi-ball comes at you and the noise and action on the table just kick it up one more notch. This is a fun table that gets your blood pumping with just the sound effects alone, add the table action plus a hilarious video mini game and you might need a rest afterwards.

This is the surf city styling of pinball. A little Jan and Dean Drag City playing as you use your pinball to “upgrade” a mustang on a turning table to make it more drag worthy. The game has a chilling vibe to it as you race you pinball up plunger alley and around the table. You’ll find yourself humming old surf tunes in no time as this table really captures the era of Beach Blanket Bingo and the surf song. 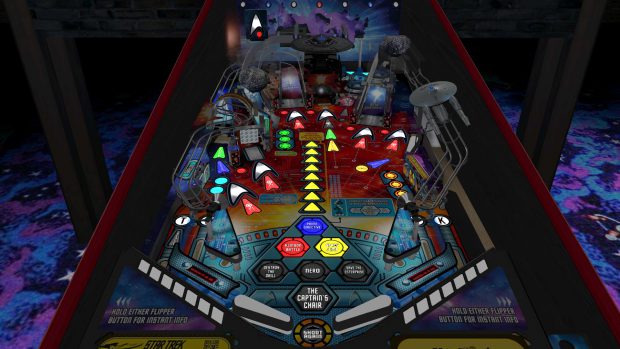 For the trekkies out there, Star Trek Premium is a barrage of flashing lights, ships and asteroids, and lots of futuristic noise. It sounds awesome, it plays awesome, everything about it is awesome.  I had played a version of this in the arcade (not sure if it was “premium”) so the video version had a lot to live up to and it did.  They went through and put in all the deep details the table is loaded with (the design shows so much love it must have been done by a trekkie) so that though I am a huge fan of the monster tables I could see this one being the one I play the most. There is something constantly going on, usually multiple things and the game pack is probably worth it for this game alone.

If you are not as big of a fan of the reboot film as you were, say, next generation then when you get to that table arrow down instead of starting the game and there you go! An older Star Trek machine with plenty of bells, whistles and lights, just the older casts.

Finishing off this set of tables is a pretty straight forward one that lets you rock out with your flippers out. “Dirty Donnie” and the design team at Stern tried their best to simulate what it would be like to be at a hard rocking concert show with all the effects. The did a nice job bringing an experience that keeps you bopping your head and hitting the flippers to the beat. The fact is a lot of people like to listen to their rock while they play video games so why not make a video game about a rock and roll pinball table? This was an perfect choice and a fun play.

But how do the really help make the atmosphere? They have THREE tables showing AC/DC evolving over the years through the table versions! Donnie was obviously a huge fan of theirs to keep coming up with new tables but we are the one who get the reward.  When you get on the AC/DC table just press the down arrow on your controller to get to the other tables.

The game teases a Ghostbusters table coming out in the near future and I will be looking greatly forward to it.  Until then I will just have to dream about having our own pinball machine and play Stern Pinball Arcade for the next best thing.