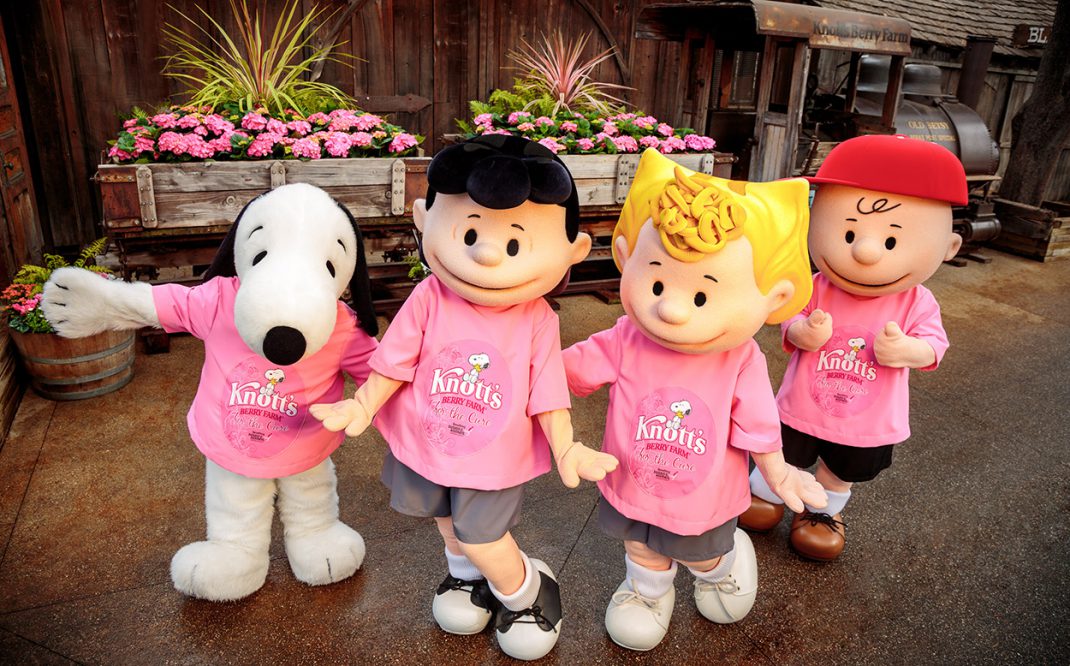 The park will turn pink in support of the promotion with specially-themed décor, pink lighting at special attractions and themed merchandise exclusively available at the park.

New this year, Knott’s Berry Farm is hosting a special experience to honor and celebrate survivors and their families who have been affected by breast cancer, with a special event called #ScreamAgainstBreastCancer in January. Knott’s will invite a group of survivors and their family members to ride Knott’s tallest thrill ride, Supreme Scream, for a one-of-a-kind moment-in-time that will launch guests over 252 feet in the air. While suspended at the highest point, survivors and their families will scream against all of the challenges and pain but most importantly to celebrate their victories and the great triumph of overcoming breast cancer. The memorable moment will be documented through GoPro© cameras mounted to the ride, capturing the powerful and dotting moment of emotion from those who have been directly affected by the disease. Supreme Scream will be lit pink starting Valentine’s Day in support of the partnership and will continue to shine across the Buena Park skyline each night for the duration of the promotion.

The promotion will provide guests with the opportunity to enjoy Knott’s world-class entertainment, attractions and special themed “pink” décor, while supporting a great cause. Special rides like Supreme Scream, Calico Mine Ride and other landmarks inside of the theme park will glow pink in honor of the promotion, and limited edition, custom designed “pink” t-shirts will be available for purchase.

“Knott’s Berry Farm has successfully raised over $360,000 during the previous promotions in partnership with Susan G. Komen Orange County. I am immensely proud of what both organizations have achieved as a team. Our park is committed to doing its part in raising funds and awareness to end the fight against breast cancer,” said Jon Storbeck, General Manager of Knott’s Berry Farm. “Every contribution makes an impact and with each donation we get one step closer to our goal. We are looking forward to coming together with Komen Orange County once again to advance women’s health and launch such a great campaign in support of all those who have been personally affected by breast cancer.”

The partnership, which originally began in 2013, will once again align two prominent organizations in raising awareness and vital funds for local breast health and breast cancer services for women and men. In previous years, the theme park also provided complimentary life-saving breast exams and mammograms to underserved and underinsured women via the Knott’s sponsored Alinea mobile mammography van, which will return this year to continue providing health screenings for women in the community.

Starting January 9, guests can purchase “Pink Tickets” for theme park admission at www.knotts.com. A portion of the proceeds from ticket and t-shirt sales will benefit Komen Orange County. Follow and join the conversation by using #ScreamAgainstBreastCancer and #KnottsPink.

For more information on Susan G. Komen Orange County, visit www.komenoc.org or call 714-957-9157. Find us on Facebook and Twitter.